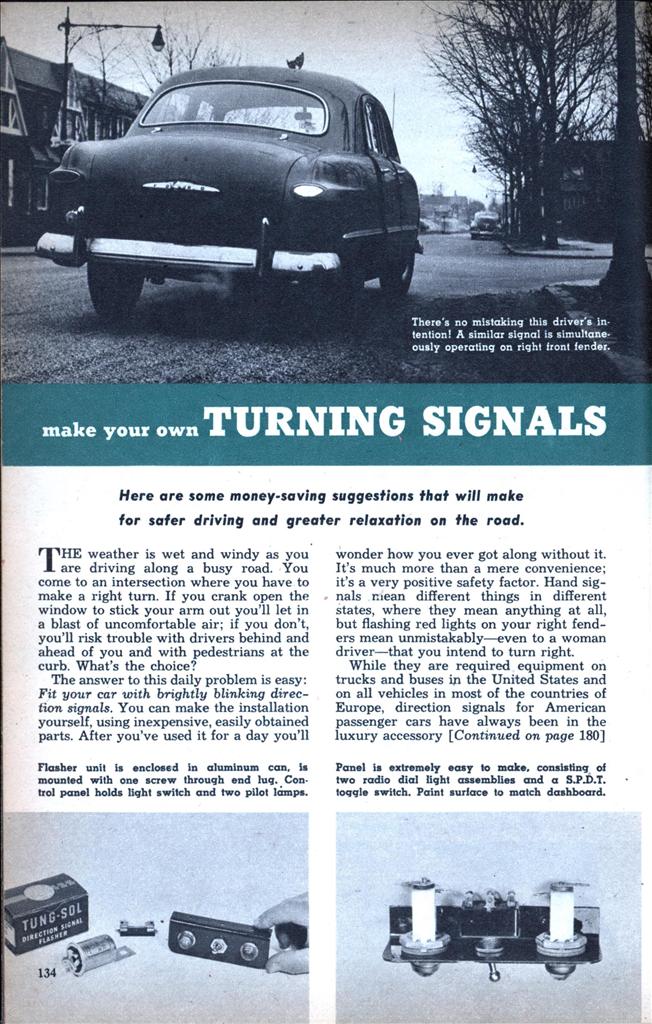 make your own TURNING SIGNALS

Here are some money-saving suggestions that will make for safer driving and greater relaxation on the road.

THE weather is wet and windy as you are driving along a busy road. You come to an intersection where you have to make a right turn. If you crank open the window to stick your arm out you’ll let in a blast of uncomfortable air; if you don’t, you’ll risk trouble with drivers behind and ahead of you and with pedestrians at the curb. What’s the choice?

The answer to this daily problem is easy: Fit your car with brightly blinking direction signals. You can make the installation yourself, using inexpensive, easily obtained parts. After you’ve used it for a day you’ll wonder how you ever got along without it. It’s much more than a mere convenience; it’s a very positive safety factor. Hand signals mean different things in different states, where they mean anything at all, but flashing red lights on your right fenders mean unmistakably—even to a woman driver—that you intend to turn right.

While they are required equipment on trucks and buses in the United States and on all vehicles in most of the countries of Europe, direction signals for American passenger cars have always been in the luxury accessory class. Even on the lowest-priced, standard cars they cost about $24 “extra.”

A basic direction signal system consists of the following: (a) Four 21 candlepower, 6-8 volt, single-contact standard automobile bulbs, which cost about 27c each. Most conveniently, these are carried in individual red jeweled “parking” lights, which mount in a single hole on each fender. Bought new, these lights cost as little as 50 cents; they can be picked up in junk yards for much less, (b) A flasher to make the lights blink automatically when the control switch is turned on. Readily obtainable from auto and chain stores at about $1.50. This is a thermal device very much like the blinkers used to produce flashing effects with Christmas tree lights, (c) A single pole, double throw (S.P.D.T.) toggle switch, with center “off” position; rated at 15 amperes at 125 volts. Costs half a dollar from any radio mail order firms. Equivalent switches, dressed up a bit, cost several dollars as automobile accessories, (d) Two radio panel dial lights, taking 6-8 volt miniature bayonet base bulbs; with amber or clear jewels. Available by the million at prices ranging from 15 to 75 cents, (e) A small single fuse block, with 10 ampere automobile fuse. About 20 cents.

The installation of the four blinkers depends of course on the individual car. Pick clear spots on the fenders, away from the regular parking and tail lights, if possible, so that the signals won’t be confused with the latter. The main part of the job is pulling wires through the car to the driver’s compartment. In many cases it is easier to drill holes through the bottom of the trunk section, run the wires under the chassis, and then bring them up and through the engine compartment to the dashboard. The front wires are no problem because the engine compartment is wide open. Use good, heavy ignition type wire and tape it down well so that it can’t flap when the car is in motion.

The “control panel” is a simple piece of aluminum or brass and holds the switch and the two pilots. It is mounted by a couple of screws to the underside of the dashboard. If the latter has open space on it, and you can drill into it readily, mount the switch and the lights on it directly.

The electrical wiring is very simple. Tracing Fig. 1 you will see that with the S.P.D.T. switch in the center position, the circuits are entirely open. Moving it to the right closes the circuit consisting of the fuse, the flasher, the switch, the right pilot light and the right rear and front signals. Because of the slight thermal inertia of the flasher, the lights don’t start to work for about half a second, and then all three of them blink on and off at the rate of about once a second. They continue to do so, of course, as long as the switch is closed.

In some cars the stop light (which goes on when you step on the brake) is combined with the license plate light, and there are separate tail lights on the fenders. It is quite possible under the circumstances to combine the direction signals with the tail lights, providing the lamp housing will take a regular 1 pear-shaped bulb and providing further that you can obtain a double-contact socket to replace the present single-contact receptacle. This at least saves the work of mounting separate signal lamps. The circuit is shown in Fig. 2. Note carefully that the previous wiring is retained, and that extra wires for the blinkers are still required.

The bulbs required in this set-up are of the dual filament, double-contact type, with one 3 candlepower and one 21 candlepower elements. These are standard items everywhere. The 3 C.P. filament functions as the normal parking or tail light when the regular control switch is turned on. When the blinker switch is thrown, the 21 C.P. filament comes on and starts winking, and even though it shines through the same housing, it is so much brighter than the 3 C.P. element that it cannot be missed.

The 21 C.P. lamps take about 2-1/2 amperes each. A ten-ampere fuse in the holder provides plenty of protection.

In most of the new cars, the functions of the stop light, the parking light and the direction signal are combined in single lamp fixtures at the rear fenders; the front lights operate as parking and direction indicators as per Fig. 2. With the direction signal switch off, the bright filaments of both tail lights go on when you step on the brake. However, if you slow down for a turn, step on the brake and flip the direction switch all at the same time, both stop lights go on, but one blinks for the desired turn signal while the other remains on, stationary. This arrangements requires a special direction signal switch, not generally available, and it also means some very messy changes in the wiring of the car. If you have ever tried to trace through the snakes of wire that disappear into enclosed tubes and conduits under a dashboard, you’ll realize that it is much easier to leave all existing circuits alone.—Robert Hertzberg