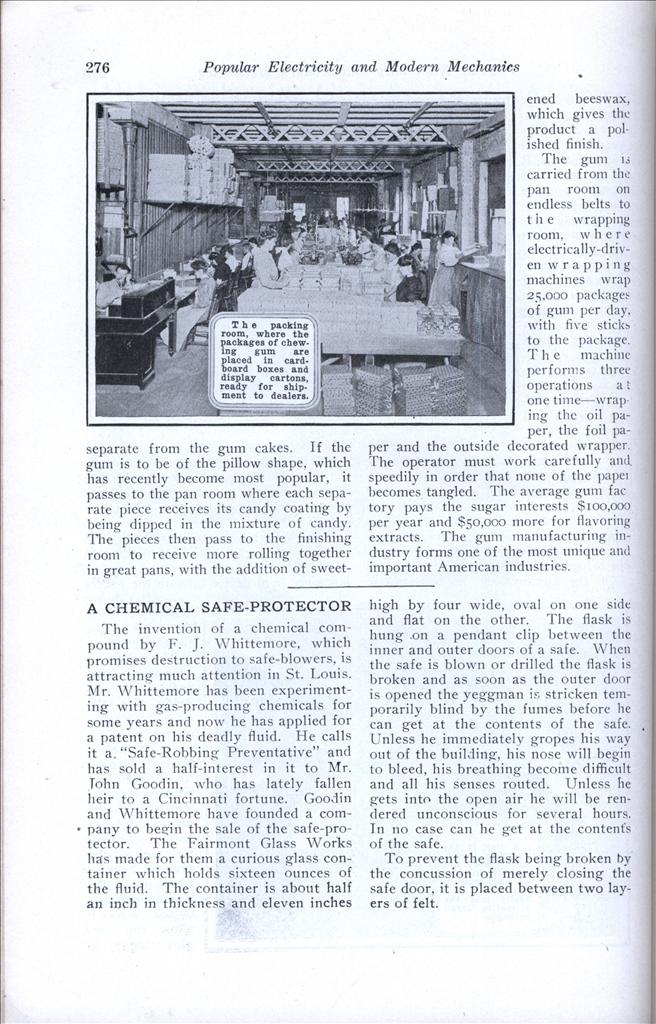 The gum chewing habit has come to stay. A few years ago physicians told us that to chew gum was to distort our faces and to waste the physical energy of the body; to-day they tell us that chewing gum aids digestion and makes for a healthy physique. Chewing gum is essentially an American habit, and having passed over the seas, has become an international affair. You may purchase American-manufactured chewing gum from the counters of establishments in Japan, China, India, Germany, Italy, Turkey and England.

About the time of the American Revolution the pioneer woodsman was in the habit of removing a chunk of spruce sap gathered on the trunk of the trees and this was made into a substance which was greatly enjoyed. The colonial sweetheart was to be seen chewing her gum when the father and mother were looking the other way, and this continued until finally both parent and child faced one another, each with the ever-present gum. Home-made gum continued as an industry until just previous to the days of the Civil War, when explorers in Central American countries discovered the chicle tree. This name is of Aztec origin, and is the name given to the sap of the sapota tree. It is this sap which is the basis of virtually all the chewing gum used in the United States. Immense tracts of land in Yucatan and Tuxpan Mexico, and throughout Central American republics, are devoted to the culture of the chicle tree, and the entire product of these millions of trees finds its way to the American factory.

The raw chicle gum is of a light brown, chocolate color. It reaches the factory in large cakes and is stored in great bins. When required for use it is broken into smaller pieces by cleverns and fed into the grinding machines, which, with 3,500 revolutions per minute, soon reduce it to a fine powder, much like pulverized coffee or sugar.

After the raw product has been ground, the pieces of sapota bark and other extraneous matter are picked out by girls. The ground product is then dried in large trays and run into chambers supplied with steam heat. It is warmed and dried at the same operation, a separate suction chute drawing out the dampness . These drying machines have fans turning at 1,200 revolutions per minute and are of 16,000 pounds capacity. The drying process requires a full week’s time.

On the same floor with the grinding machines are the sugar mills, which grind the toothsome and quite important ingredient of the finished product into powder. In this condition the sugar is transferred to the gum-making floor below, where the three ingredients are mixed in hoppers without being touched by human hands.

On the gum-making floor—in huge mixing pots which are furnished with revolving paddles—the gum-sugar, medication and flavor are blended at the rate of 600 pounds every 20 minutes for each mixing machine. Then the mixture is kneaded by men with heavy gloves and passed through six sets of rollers. It is dusted with sugar to prevent sticking to rolls. The surplus sugar in this operation is caught by a device beneath the rollers and after being sifted, is ready for use in the next operation.

The gum is now i n long, soft cakes and ready for the scoring machines, which cut it nearly through in sizes to fit the particular brand which is being made. After the scoring process, the product runs through the breaker machines, which allow the surplus sugar to separate from the gum cakes. If the gum is to be of the pillow shape, which has recently become most popular, it passes to the pan room where each separate piece receives its candy coating by being dipped in the mixture of candy. The pieces then pass to the finishing room to receive more rolling together in great pans, with the addition of sweetened beeswax, which gives the product a polished finish.

The gum is carried from the pan room on endless belts to the wrapping room, where electrically-driven wrapping machines wrap 25.000 packages of gum per day, with five sticks to the package. The machine performs three operations at one time—wraping the oil paper, the foil paper and the outside decorated wrapper. The operator must work carefully and. speedily in order that none of the paper becomes tangled. The average gum factory pays the sugar interests $100,000 per year and $50,000 more for flavoring extracts. The gum manufacturing industry forms one of the most unique and important American industries.