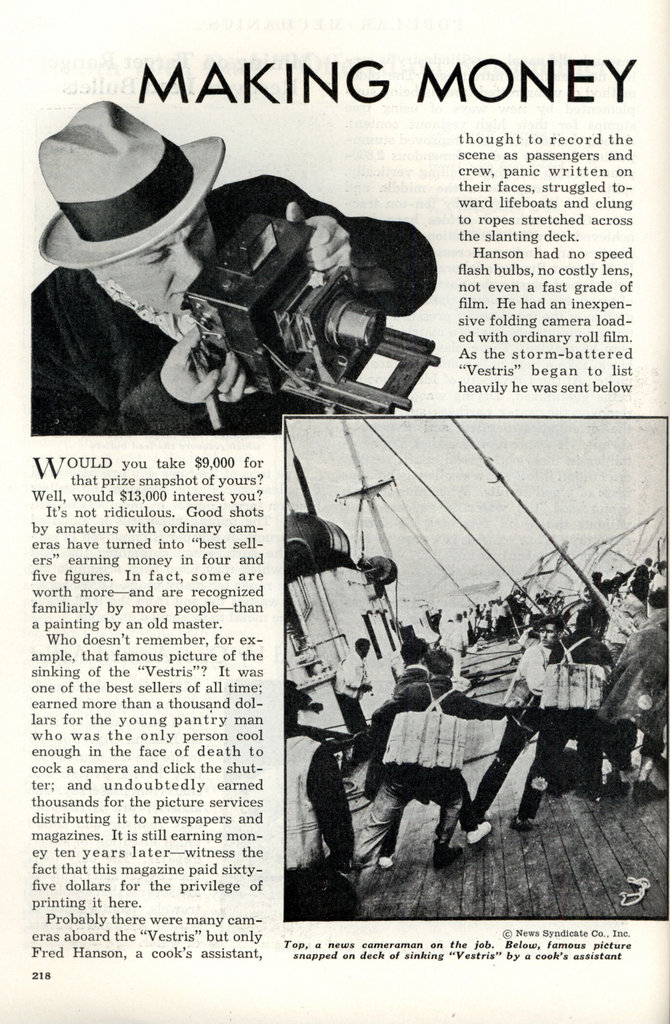 Making Money with Your Pictures

It’s not ridiculous. Good shots by amateurs with ordinary cameras have turned into “best sellers” earning money in four and five figures. In fact, some are worth moreâ€”and are recognized familiarly by more peopleâ€”than a painting by an old master.

Who doesn’t remember, for example, that famous picture of the sinking of the “Vestris”? It was one of the best sellers of all time; earned more than a thousand dollars for the young pantry man who was the only person cool enough in the face of death to cock a camera and click the shutter; and undoubtedly earned thousands for the picture services distributing it to newspapers and magazines. It is still earning money ten years laterâ€”witness the fact that this magazine paid sixty-five dollars for the privilege of printing it here.

Probably there were many cam-eras aboard the “Vestris” but only Fred Hanson, a cook’s assistant, thought to record the scene as passengers and crew, panic written on their faces, struggled toward lifeboats and clung to ropes stretched across the slanting deck.

Hanson had no speed flash bulbs, no costly lens, not even a fast grade of film. He had an inexpensive folding camera loaded with ordinary roll film. As the storm-battered “Vestris” began to list heavily he was sent below to help bail. Let him tell his story from there.

“We were called up to the decks later and told to put on life preservers,” he related. “I went to my bunk to get mine, and got my camera too. On deck I started taking pictures. Several times I was knocked down by waves. Once I thought my camera was gone. Everyone was screaming and yelling. With everyone trying to get into the lifeboats, I knew I might as well stay and take pictures. I did until I thought all the boats were launched except one. I jumped into it, after taking my last picture on deck.”

In New York, the rescue ship was met by newspapermen hunting photographs of the disaster. No one seemed to have any. Then Hanson approached a man from the New-York Daily News. He had snapped a few pictures, he said. He was hurried to the newspaper office, his roll was rushed to the darkroom. His pictures, best of them the dramatic shot reproduced here, made papers throughout the world.

Of course, you don’t have an opportunity every day to photograph a shipwreck. But more homely subjects are packed with human appeal and potential earning power. Take the “Laughing Cat.” It happens to be from the camera of a professional, Russell Hamm, now staff photographer of the Chicago Daily News; but it could as easily have been yours.

Hamm had been sent down near St. Louis to make a feature picture of a mother cat with her litter of fifteen kittens. When he had finished, the woman owner remarked that she was training another cat to make facial expressions. Hamm asked to be shown. The lady set up a mirror in front of her pet and immediately the cat grinned and grimaced. The photographer took a shot at the reflection in the mirror and went home. From the developing tank came “The Laughing Cat,” so genuinely humorous that newspaper, magazine and trade journal editors around the globe bought and printed it, and in fifteen years that picture has earned $13,000!

Big money goes to those rare shots whose appeal is not just for the moment, but lasting. But thousands of less important snapshots are bought every year from amateurs smart enough to know a picture when they see one and to keep a camera at hand every minute, loaded and ready.

Amateur scoop of 1938 thus far was the action shot of the collapse of the Niagara Falls bridge. There was a case where a whole colony of press photographers had been waiting for days to catch the crash. Yet not one professional got the big picture. An amateur did. For nearly a week an ice jam had been menacing the Falls View span. William K. Kirkwood of Simcoe, Ont., visiting Niagara Falls on a business trip, drove over for a look and a picture of the jam. The water level was receding and the newspapermen had relaxed their vigilance.

Just as Kirkwood raised his camera, the bridge buckled. As fast as he could, he wound the film, pressed the shutter release, wound it again. A matter of seconds, and it was all over.

Then Kirkwood wondered what he had. He didn’t see any other cameras around, and on an impulse he telephoned a Toronto newspaper. The editor said he had his own photographers there and the big picture syndicates were covering him too. Mr. Kirkwood insisted he hadn’t seen any photographers so the editor finally took his name.

By the time he reached his hotel there was a long-distance call from Toronto awaiting him. Would he please take his film right away to a certain address? He did. Press photographers who had missed the picture rushed his roll to the developer. In thirty minutes his best shot was on the wire to a New York picture syndicate. It was a scoop! He could name his price, in three figures; and before many minutes other newspapers and syndicates were calling for his other shots.

It isn’t often you catch the cameraman napping, however. Yet the amateur who, like Mr. Kirkwood, always keeps his “picture gun” in his pocket, loaded, has as good a chance as the professional to make a “killing.” A dozen photographers might cover an intercollegiate foot race and only one capture the thrilling finish in the snapshot printed with this article.

What started as a routine assignment for Samuel Shere of International News Photos brought him first prize from Editor & Publisher magazine for the best news picture of 1937, a magnificent shot of the dirigible “Hindenburg” aflame at Lakehurst.

“The big ship was approaching the mast and was discharging water ballast,” related Shere. “I was measuring her big hulk in my camera finder when I detected a flash of fire in her tail. Then came the first explosion that shook the ground. In that split second I pulled the trigger of my camera, recording the actual peak of the ‘Hindenburg’ disaster. As fast as I could, I took other shots. The flames finished her in thirty-two seconds. The heat was terrific. I ran toward the blazing ship and shot pictures of survivors. I was standing not far from the control cabin when the ship’s small-arm ammunition went off. Someone yelled ‘Fall down quick!’ and I did until the firing ceased.”

A young fellow who used to help a truck driver bring farm produce from Michigan into Chicago heard there was pin money in pictures, so he took ten dollars out of the bank and bought a camera. The very next morning his truck swerved off the road to avoid crashing into a truck ahead. Getting out, he found a half dozen trucks “accordioned” into each other, with a passenger car in front. The first truck had been hauling four new automobiles. It was a “swell looking wreck.” The problem was to get an angle that would take in the entire scene. He finally snapped a series of six pictures that could be arranged in a panorama. In Chicago he took his films to a newspaper office. They paid him twelve dollars for three prints, gave him the negatives, sent him upstairs to a wire association office where he collected fifteen dollars more. They told him where he might make some further sales, and two hours later he had sixty-five dollars.

If you had had some good exclusive pictures of the former Wallis Warfield of Baltimore at the time King Edward VIII of England abdicated to marry her, you might have sold them for $50,000.

The highest price ever paid for news pictures for use in a single publication in the United States was for the photographs of the Byrd expedition at the South Pole. The seller was Wide World Photos; the buyer, Popular Mechanics Magazineâ€”and the price was nearly $4,000 for exclusive publication in the scientific field.

An English sailor on the airplane carrier “Hermes” was snapping pictures for his scrapbook while the Lindbergh seaplane, Col. and Mrs. Charles A. Lindbergh aboard, was being lowered into the flood-waters near Hankow, China, in the autumn of 1931. As the plane hit the water it capsized, hurling its famous occupants into the Yangtze river. The sailor’s film-pack of twelve exposures showed the entire incident. After the rescue, the “gob” handed his negatives to his superior, who presented them to Colonel Lindbergh.

He decided to auction the pictures off to American newspaper interests, the money to be used for a home for British navy men on the Hankow waterfront. The New York Times offered $9,000 for the pictures.

So it pays to keep your camera in your pocket, primed and ready. It need not be an expensive one. Better use one you can master. Keep it handy, keep it loaded, keep your eye open!