Making SUBMARINES SAFE for SAILORS (May, 1930) 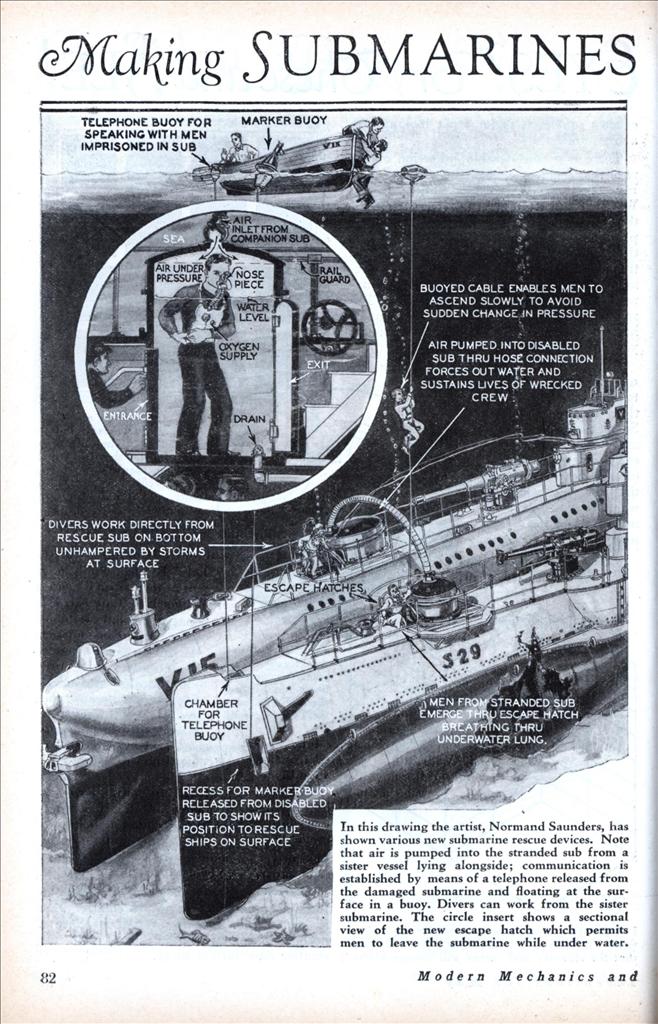 NINETY-NINE men who have perished at the bottom of the sea in the thirteen American submarine disasters since the E-4 went down off Pearl Harbor, Hawaii, on March 25, 1915, may not have died in vain. Spurred on by their heroic sacrifice —and particularly by the loss of the 73 who perished in the S-51 off Block Island and the S-4, rammed and sunk by the Coast Guard Destroyer Paulding off Providence— the navy has at last perfected a complete group of submarine rescue devices which are expected to save all who escape the first rush of water and find refuge in watertight compartments.

More than 5,000 people submitted rescue ideas to the navy following the S-4 disaster, which claimed forty lives, the greatest loss in any one submarine sinking in the American navy’s history.

None of the ideas adopted, however, were by any means new—they had been suggested time and again, but it took an appalling disaster to get them put into practice.

The devices adopted are: An escape hatch by which members of the crew can emerge from the submarine while under water.

The Momsen “lung,” which looks something like a combination gas mask and hot water bottle, and takes the place of a diving suit and air compressor while the wearer ascends to the surface.

A telephone buoy, which can be released from within the submarine, when it rises to the surface and affords telephone connections by which the rescue ships can communicate with the crew of the submarine.

A marker buoy, which rises to the surface and marks location of the sunken sub.

Air valves for all compartments to which rescuers can attach hose to pump air to the crew and blow water out of flooded compartments.

Pad eyes lining both sides of the hull, to which lifting chains can be attached for raising the submarine, eliminating the necessity of passing chains under the hull.

The escape hatch is mounted in the ceiling of the forward crew’s room, situated between the bow torpedo room and the control quarters under the conning tower. It consists of an air lock, with doors top and bottom. In operation the sailors—as many as can crowd into the lock—enter through the bottom door, which is then closed and dogged down. A hand valve operated from within the lock then admits water, after the sailors have adjusted the “lung” diving helmets. When the lock is filled the outer door can be opened, as the sea water pressure outside has been equalized. A buoyed line shoots to the surface, and the men ascend it one by one using the line to check the rate of ascent and so avoid the “bends” or diver’s cramps, which are caused by too rapid decompression of the body.

The lock, however, can be used only by men who can reach the crew room, and only when the crew room escapes damage and flooding in the accident. As it is impractical, because of weight, to equip every compartment with an escape hatch, equal attention has been devoted to the other safety features. Chief reliance is placed on the improved air lines, by which fresh air can be sent down to the imprisoned men, and water blown out to reestablish the buoyancy of the boat, and in the pad eyes, which enable rescue crews to quickly attach the pontoon chains. Days were spent by the divers tunneling under the S-51 off- Block Island in order to pass the chain slings under the hull. An underwater jet nozzle had to be developed to blow the sand out, under tremendous pressure, and one diver narrowly escaped with his life when his tunnel caved in behind him.

With the pad eyes the divers will have no tunneling to do, and no dangerous climbing over the hull, in constant risk of fouling their air lines.

The marker buoy is expected to eliminate hours of dragging to locate the wreck— provided there is any one left alive aboard the submarine to pull the release lever, and the telephone buoy, with connections to all compartments, will eliminate the tedious and unsatisfactory undersea telegraph, or hammer tapping on the hull—the method that spelled out the dying message of the six who perished in the S-4’s torpedo room.

The great difficulty in devising rescue equipment was the necessity of avoiding any appreciable increase in the weight of the ship. On the surface a submarine is quite like a surface ship and will float as well under varying loads as a 10,000 ton cargo boat does empty or loaded.

But under water it is in a state of equilibrium, and must weigh exactly as much as the amount of water it displaces. Given that state of equilibrium and the horizontal diving rudders or planes can force it down to any desired depth, and maintain it there. For quick diving, however, it must have greater tank capacity than the amount of ballast water needed to establish equilibrium, so that a negative balance can be established, and the boat dragged down by its greater weight, until a safe level is reached for blowing out the excess water.

It follows then that if any great amount of weight is added to the hull and equipment the disposable weight of water ballast will be cut down, and with less disposable weight to work with, the performance of the boat will suffer.

Ordinary diving suits would be impractical for a submarine, even if some way could be found to supply the air for them, because the weight of sufficient suits for an entire crew would be prohibitive.