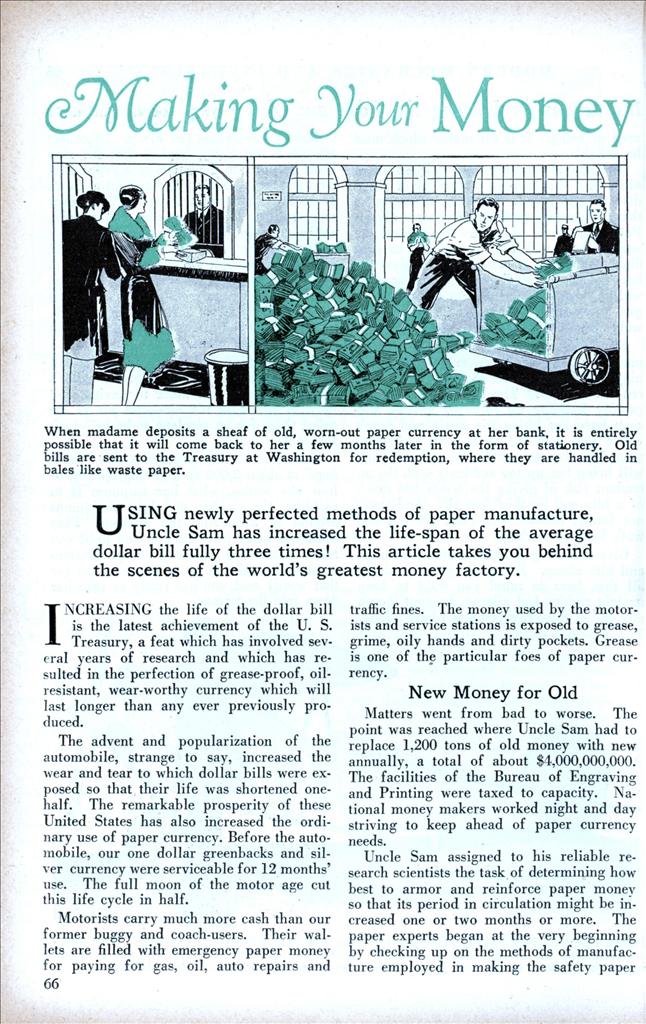 USING newly perfected methods of paper manufacture, Uncle Sam has increased the life-span of the average dollar bill fully three times! This article takes you behind the scenes of the world’s greatest money factory.

INCREASING the life of the dollar bill is the latest achievement of the U. S. Treasury, a feat which has involved several years of research and which has resulted in the perfection of grease-proof, oil-resistant, wear-worthy currency which will last longer than any ever previously produced.

The advent and popularization of the automobile, strange to say, increased the wear and tear to which dollar bills were exposed so that their life was shortened one-half. The remarkable prosperity of these United States has also increased the ordinary use of paper currency. Before the automobile, our one dollar greenbacks and silver currency were serviceable for 12 months’ use. The full moon of the motor age cut this life cycle in half.

Motorists carry much more cash than our former buggy and coach-users. Their wallets are filled with emergency paper money for paying for gas, oil, auto repairs and traffic fines. The money used by the motorists and service stations is exposed to grease, grime, oily hands and dirty pockets. Grease is one of the particular foes of paper currency.

New Money for Old Matters went from bad to worse. The point was reached where Uncle Sam had to replace 1,200 tons of old money with new annually, a total of about $4,000,000,000. The facilities of the Bureau of Engraving and Printing were taxed to capacity. National money makers worked night and day striving to keep ahead of paper currency needs.

Uncle Sam assigned to his reliable research scientists the task of determining how best to armor and reinforce paper money so that its period in circulation might be increased one or two months or more. The paper experts began at the very beginning by checking up on the methods of manufacture employed in making the safety paper used in currency production. They devised machines to test the wearing qualities of currency. A dollar bill folding device was invented, which subjected dollar bills to foldings and creasings such as they would suffer in your pocketbook, or mine. The average dollar bill wore through when subjected to 2,000 such foldings.

The paper used for currency is made of a mixture of three parts cotton and one part linen rags of the best quality. Thorough tests brought to light the fact that this paper was exposed to too much “beating” in the production process so that its fibers were weakened. By decreasing this “beating,” a better paper was produced which would withstand 6,000 test foldings. This scientific investigation resulted in the output of a safety paper three times as strong as that used originally.

Protected From Grease A great variety of chemicals were then tested for the treatment of the safety paper so that it would be better qualified to withstand the damaging effects of greasy hands and oily pockets, wallets and cash registers. A certain formaldehyde solution was finally developed which when sprayed over the paper currency protected it against grease and grime.

Tests were also made of the tensile strength, bursting strength, tear-ability, thickness, opacity and inking qualities of the new safety paper to see that it was satisfactory. A number of test batches of the paper were made in the miniature Government paper mill. Eventually, paper currency of the smaller denominations was made and circulated in test amounts. It demonstrated conclusively that it was 50 per cent stronger and longer-wearing than the paper money formerly used. Its current use has decreased the strain on Uncle Sam’s paper money plant at Washington.

The scientists delegated to experiment with the unsatisfactory paper money also discovered more profitable uses for redeemed currency. Some 40 carloads, equivalent to 1,450 tons of worn out paper money, are returned to the Treasury annually from all parts of the United States. Uncle Sam exchanges new money for old, replacing each dilapitated, ragged dollar bill with a crackling, spotless greenback of similar denomination.

Redeemed currency is dumped into a battery of 10 macerators which chew it into mincemeat form. The macerated money is then converted into paper pulp and sold commercially for the manufacture of coarse cardboard, fibre board, shoe counters and similar materials. Souvenirs such as statuettes of the Washington Monument are also made from money mincemeat and sold to tourists. The money is de-inked and mutilated so completely that it cannot be used for illegal purposes. For many years the Government has lost money on its paper currency redemption.

The investigators found that by dusting and cleaning the macerated money more carefully, they could produce a paper pulp of better quality suitable for the manufacture of fine grade writing and printing paper. Milady now uses monogrammed stationery made from worn out greenbacks and yellowbacks. The paper money which you spend thus may come home again in a new and revised form so that you don’t recognize it. The U. S. Government will henceforth realize a good net profit from paper currency redemption.

The last and most important step in the improvement of our paper money results from the Treasury Department’s decision to reduce the size of our dollar bills to smaller dimensions. Our present paper currency is of standard 7-7/16 by 3-1/8 inches dimensions. The new dollar bills, to be circulated first in 1929, will be one-third smaller, with dimenions of 6-1/8 by 2-5/8 inches.

Cutting the size of our most popular denominations of paper money will result in enormous savings in ink and paper, and will increase the storage space in the U. S. treasury and federal reserve banks one-third. The new bills will be easier to handle, much more durable and more difficult to counterfeit successfully. The same cash registers and money counting machines now in use can be employed efficiently in handling the new size silver certificates. Later, greenbacks of the other popular denominations will also be made in reduced dimensions. It will take five years to replace the old paper currency with new.

Money Factory Remodeled The jump from the manufacture of one size of money to another has necessitated vital equipment changes at the Government’s paper money factory. Old presses have required complete remodelling and new presses have been built on special contracts. Copper plates of the new silver certificates have been made by the national engravers, the most skilled craftsmen of their trade in the world. This task in itself is colossal, for it takes seven engravers 4-1/2 months to produce one of these valuable money plates. Many different engravers work on each plate to contribute individual touches and to increase the difficulties of counterfeiting such plates.

The new pesos size one dollar bills will bear the likeness of George Washington on their faces. This picture is one of the finest pieces of plate printing ever performed. It is wholly impossible to counterfeit! this silver certificate so that Government specialists cannot detect the fraud. If you will examine one of these new dollar bills carefully, you will notice how the picture of Washington stands out and looks as though that distinguished soldier and statesman was going to step from the paper to greet you. All photographic attempts to counterfeit that picture have failed because the reproductions invariably appear flat and are easy to detect. The future small size two dollar bills will bear the photograph of Thomas Jefferson, the fives will carry the likeness of Abraham Lincoln, while the tens will reproduce the features of Theodore Roosevelt.

Uncle Sam’s present paper currency system is the most complicated in the world for it consists of five national currencies and 39 different types of paper money. Only financial experts, bankers and money specialists can readily identify all varieties on sight. The average layman knows the bills only by the figures indicating their purchasing power. To unscramble this paper money puzzle is another purpose of Uncle Sam in the reforms which he will institute. Originally we had available five different varieties of one dollar bills. Under the new plan, we will have available for spending purposes only one style of one dollar bill, the silver certificate. The $2 and $5 bills will be similarly standardized when produced in reduced sizes. Our 39 money varieties will be reduced ultimately to 11.