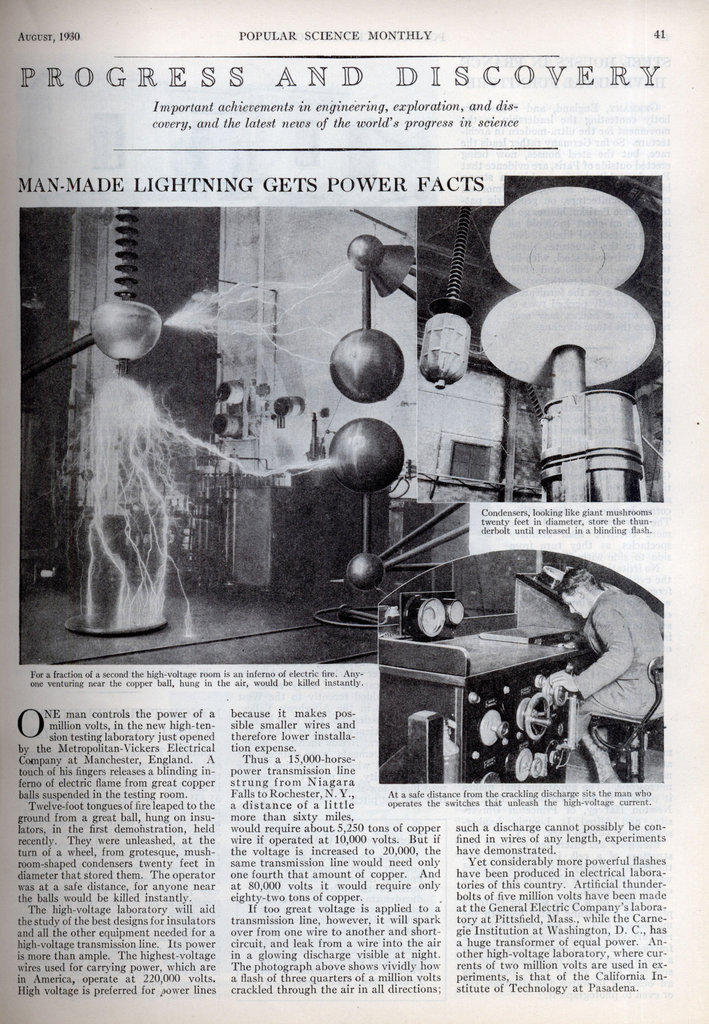 ONE man controls the power of a million volts, in the new high-tension testing laboratory just opened by the Metropolitan-Vickers Electrical Company at Manchester, England. A touch of his fingers releases a blinding inferno of electric flame from great copper balls suspended in the testing room.

Twelve-foot tongues of fire leaped to the ground from a great ball, hung on insulators, in the first demonstration, held recently. They were unleashed, at the turn of a wheel, from grotesque, mushroom-shaped condensers twenty feet in diameter that stored them. The operator was at a safe distance, for anyone near the balls would be killed instantly.

The high-voltage laboratory will aid the study of the best designs for insulators and all the other equipment needed for a high-voltage transmission line. Its power is more than ample. The highest-voltage wires used for carrying power, which are in America, operate at 220,000 volts. High voltage is preferred for power lines because it makes possible smaller wires and therefore lower installation expense.

Thus a 15,000-horse-power transmission line strung from Niagara Falls to Rochester, N. Y., a distance of a little more than sixty miles, would require about 5,250 tons of copper wire if operated at 10,000 volts. But if the voltage is increased to 20,000, the same transmission line would need only one fourth that amount of copper. And at 80,000 volts it would require only eighty-two tons of copper.

If too great voltage is applied to a transmission line, however, it will spark over from one wire to another and short-circuit, and leak from a wire into the air in a glowing discharge visible at night. The photograph above shows vividly how a flash of three quarters of a million volts crackled through the air in all directions; such a discharge cannot possibly be confined in wires of any length, experiments have demonstrated.

Yet considerably more powerful flashes have been produced in electrical laboratories of this country. Artificial thunderbolts of five million volts have been made at the General Electric Company’s laboratory at Pittsfield, Mass., while the Carnegie Institution at Washington, D. C, has a huge transformer of equal power. Another high-voltage laboratory, where currents of two million volts are used in experiments, is that of the California Institute of Technology at Pasadena.