Mechanix Illustrated
Issue: May, 1947
Posted in: Cool
Tags: worlds fair
6 Comments on Man of the Monsters (May, 1947) 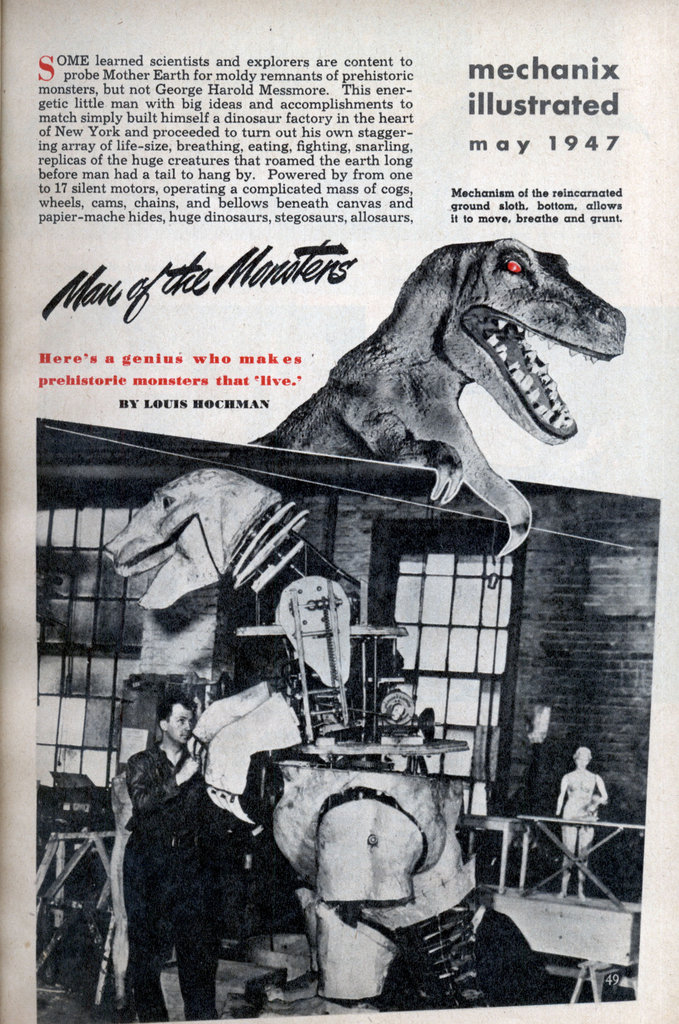 Man of the Monsters

Here’s a genius who makes prehistoric monsters that “live.”

SOME learned scientists and explorers are content to probe Mother Earth for moldy remnants of prehistoric monsters, but not George Harold Messmore. This energetic little man with big ideas and accomplishments to match simply built himself a dinosaur factory in the heart of New York and proceeded to turn out his own staggering array of life-size, breathing, eating, fighting, snarling, replicas of the huge creatures that roamed the earth long before man had a tail to hang by. Powered by from one to 17 silent motors, operating a complicated mass of cogs, wheels, cams, chains, and bellows beneath canvas and papier-mache hides, huge dinosaurs, stegosaurs, allosaurs, saber-tooth tigers, mastodons and other monsters lash their tails, blink their eyes, gnash their teeth, swing their heads and limbs and emit frightful howls and screams. (Their vocal renditions issue from small phonograph recordings in their throats, but the secret of how these voice-noises were figured out still lies locked in Messmore’s brain.)

Though he started his peculiar business in 1918 with a partner, Joe Damon, since retired, the firm of Messmore and Damon didn’t attain its world-wide fame until 1933, when they put on their spectacular exhibit, “The World a Million Years Ago” at the Chicago Century of Progress Exposition. That exhibit, which drew thousands of spectators from the far corners of the earth, was one of the great box-office bonanzas of the Fair. Visitors who entered the huge metal globe of the world, which housed the exhibit, were treated to a tour through steaming prehistoric jungles alive with such kicking, squirming, roaring and tail-lashing monsters as brontosauri, allosauri, ichthyosauri, stegosauri and dimetrodons. The brontosaurus, a 60-foot mechanized reproduction of its extinct counterpart, could move its long neck in any direction and even pick hats off unsuspecting spectators’ heads.” Its movements were activated by 17 motors, guided by a man who manipulated a push-button control panel from a secret recess inside.

“That exhibit sure put us on the map,” reminisces Messmore. “We were always cooking up new gags to publicize it.” One of those gags resulted in so much world-wide publicity that Messmore had to stop his clipping agency from sending him any more newspaper clippings about it.

“It was breaking me to pay for all those clippings,” explains Messmore. “You see, during the Fair, the exhibit was forced to move to a less desirable location and it needed a shot in the arm; so we changed its name to ‘Down the Lost River’ and hired a couple of nudists to go through a wedding ceremony in it. The bride was a Milwaukee gal and the groom came from Texas and all the members of the wedding party were as naked as jaybirds, except the minister, who wore a dignified goatskin. Reporters, feature writers and press and newsreel photographers really did a job on that ceremony, but so did a mechanic who accidentally threw the wrong switch and started up a tyrannosaurus and glyptodon. In the excitement a nudist and one of the bridesmaids fell backwards into the flotsam of the Lost River.”

Turning from the primeval to the medieval, Messmore took over the Show Boat and set up another mechanized exhibit called “The Torture Chamber” where he entertained his customers with such delicate scenes as screaming and groaning men and women being broken on the rack, getting boiled in oil, having their feet seared with red-hot irons or cooked in iron boots filled with molten lead. These exhibits consisted of life-sized, mechanized men with settings, costumes and torture methods accurately reproducing those of the middle ages. Through cleverly recorded and synchronized sound effects, visitors heard the questioning of the inquisitor as well as the screams and groans of the unfortunate victims.

High spot of this exhibit, however, was Ann Kay, “The Crusader’s Bride,” who stepped forth wearing a medieval chastity belt, one of those iron panties which crusading husbands locked their wives into before going off to war. Ann Kay wore nothing else. This soon brought down on Messmore the wrath of official World’s Fair Censor Joe Moriarity.

“See here, Messmore,” he cried, “you cover up that girl’s bosom or I’ll close your show!”

“Yes,” replied Moriarity, “but it’s got to be opaque.”

That night Messmore put his ingenuity to work. He made a plaster cast of Miss Kay’s bust, poured some flesh-colored latex into the mold and made a paper-thin, thoroughly form-fitting bra which, when donned, powdered and retouched with rouge, couldn’t be spotted from two inches away.

“Moriarity sure was mad,” laughs Messmore, “but he couldn’t do a thing. The bra was opaque. People offered me thousands for that formula but we never gave out the secret.”

Though Ann Kay and her cast iron device drew large crowds to the exhibit, Messmore’s press agent for some reason couldn’t get the papers to mention the chastity belt.

“It’s no use,” he told Messmore one night, “the papers won’t touch it. I’ve tried everything.”

“That’s what you say,” replied Messmore. “I’ll bet you fifty bucks I can get it mentioned.”

Messmore reached for the phone and called one of the local papers.

“I want to place an ad in the Lost and Found section,” he said into the mouthpiece. “This is it: ‘Lost: The key to the chastity belt. Liberal reward. Return to M. T. Show on Show Boat.’ ” Messmore won the bet.

In 1934, when International Harvester decided to demonstrate their McCormick-Deering milker at an exhibit, they turned to Messmore and Damon to produce a mechanical cow to which the milker could be attached. Nothing but a pure-bred blemish-free Holstein cow which could moo, switch its tail, turn its head, wink its eyes, chew its cud, breathe and give milk would do.

After examining over 150 cows, Mrs. Alken Ina Ormsby, No. 864,903, a bovine beauty of the finest qualifications, was selected. For weeks, she lived in regal splendor at the Messmore and Damon factory, eating the best of foods and living the life of Riley as she posed for her exact mechanical likeness. But when that likeness was finished, Mrs. Aiken’s days of luxury came to an end and her skin was used to cover the mechanical creation she had been model for. At the exhibit, Messmore hooked the mechanical milker to the cow, running a pipeline up through one leg so that the imitation milk could be pumped back from the pail into the udder and then milked out again into the pail. “That cow sure fooled a lot of people,” chuckles Messmore. “Once a hard-bitten old farmer watched her for some time, then came over and remarked, ‘You know, I’ve been watching thet cow fer over an hour now, and by gosh she’s still givin’ milk!’ ”

Today Messmore’s extraordinary inventory calls for a large staff of skilled wood carvers, seamstresses, machinists, scenic artists, sculptors and workers in every medium from welding to stage carpentry. Messmore himself does most of the sculpture work and can figure out in a jiffy what complicated eccentrics, gears, rods and cams are needed to bring anything from a six-inch dwarf to a 60-foot brontosaurus to life. He once made a herd of elephants which walked across the Zeigfeld stage carrying chorus girls in their trunks.

When a department store books one of his exhibits it pays a flat sum, sometimes as much as $15,000 plus half the gate up to $35,000. Frequently Messmore will revive an old show, such as “The World a Million Years Ago” or “The Torture Chamber,” and send it on tour.

“Those shows will never become outdated,” he claims. “Heck, one’s a million years old already and it still packs ’em in!”