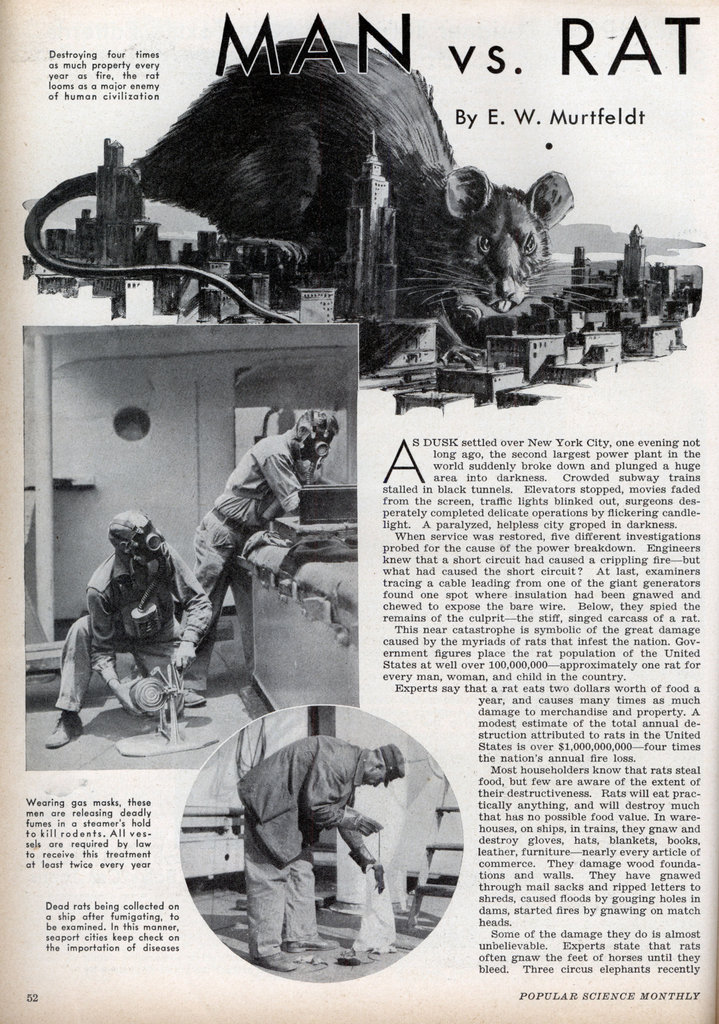 …Experts Hunt Down a Brazen Thief, Vandal, and Killer

AS DUSK settled over New York City, one evening not long ago, the second largest power plant in the world suddenly broke down and plunged a huge area into darkness. Crowded subway trains stalled in black tunnels. Elevators stopped, movies faded from the screen, traffic lights blinked out, surgeons desperately completed delicate operations by flickering candlelight. A paralyzed, helpless city groped in darkness.

When service was restored, five different investigations probed for the cause of the power breakdown. Engineers knew that a short circuit had caused a crippling fireâ€”but what had caused the short circuit? At last, examiners tracing a cable leading from one of the giant generators found one spot where insulation had been gnawed and chewed to expose the bare wire. Below, they spied the remains of the culpritâ€”the stiff, singed carcass of a rat. This near catastrophe is symbolic of the great damage caused by the myriads of rats that infest the nation. Government figures place the rat population of the United States at well over 100,000,000â€”approximately one rat for every man, woman, and child in the country.

Experts say that a rat eats two dollars worth of food a year, and causes many times as much damage to merchandise and property. A modest estimate of the total annual destruction attributed to rats in the United States is over $1,000,000,000â€”four times the nation’s annual fire loss.

Most householders know that rats steal food, but few are aware of the extent of their destructiveness. Rats will eat practically anything, and will destroy much that has no possible food value. In warehouses, on ships, in trains, they gnaw and destroy gloves, hats, blankets, books, leather, furnitureâ€”nearly every article of commerce. They damage wood foundations and walls. They have gnawed through mail sacks and ripped letters to shreds, caused floods by gouging holes in dams, started fires by gnawing on match heads.

Some of the damage they do is almost unbelievable. Experts state that rats often gnaw the feet of horses until they bleed. Three circus elephants recently had to be destroyed after rats had eaten into their ponderous hoofs. Gas explosions and fires have been traced to rodents gnawing holes in lead gas pipes. According to a Utica, N. Y., florist, a band of rats once stole more than 500 carnations from his flower vault.

When starved, rats lose their natural timidity and will attack cats, dogs, and even human beings. Not long ago, an English workman descended into a coal mine that had been closed for several weeks. No one ever saw him alive again. Hordes of starved rats attacked and killed the unfortunate miner, whose bones were later discovered. And in a slum borough of London, a mother and her children were afraid to go home from work until the father joined them. Rats regularly took possession of their rooms as soon as the family left them, and would attack the children if not beaten off with a club.

Commonly used poisons include phosphorus, arsenic, squill, and a thallium preparation, although many experts refuse to use the latter, since there is said to be no known antidote in case a human being should swallow some by accident. Luscious tidbits of poisoned bait are placed near rat holes and runways, always hidden within paper bags. Curiously enough, rats prefer to hunt food that is hidden rather than to eat what is left in the open.

SQUILL, made by powdering a European plant bulb, is used in many cases where domestic animals might get at the poisoned bait. This substance can be employed safely, because a rat has a “one-way” throat and is unable to disgorge anything it swallows. In quantity, squill is an emetic, and if eaten by a dog or cat will be quickly thrown up. Rats, however, cannot rid themselves of it, and so they die.

Cyanide gas is employed wherever it is possible to seal an infested area completely. This method is used on ships, which are required by law to be fumigated at least twice a year.

Rat boards are an excellent substitute where, for one reason or another, poison is not advisable. These are merely stout boards fastened down over rat runways and near rat holes. Their surfaces are covered with a layer of soft but very adhesive glue that catches the rodents just as fly paper holds insects.

Trapping is the least satisfactory of all rat-catching methods, experts declare, for when one rat is caught his comrades are canny enough to avoid the snare. Many rats are quick enough to snatch the bait off a spring trap without being caught in the jaws. According to Dr. C. K. Stewart, director of rodent control for the Los Angeles, Calif., health department, rats have been known to jump back and forth over traps until their tails released the springs, and then chew up the bait at their leisure. If its tail gets caught, the rat will gnaw it off and escape.

ONE of the most recent developments in the war on rodents is reported from Europe. Health officials there are disposing of rats by spreading among them the virus of a disease that is said to kill the animals by the thousands. It is believed that the disease employed is confined solely to rodents, but because there is a remote chance that it might spread to other forms of animal life and even to human beings, the U. S. Public Health Service has so far forbidden its use in this country.

Sometimes a new system for killing rats is stumbled on by accident. In a large bottling factory, for example, a workman left a bag of grain behind a vat of water, the surface of which, was covered with soaking corks, several layers deep. One morning, the worker was amazed to find the vat full of drowned rats, which evidently had tried to use the buoyant corks as a surface over which to reach the grain. The corks held the tentative weight of one foot, but when a rat placed his entire weight on them, he was unceremoniously dumped to his death in the vat.

Such mistakes are rare among rats, however, for the rodents show amazing ingenuity in accomplishing their ends. A story is told of a band of rats that attacked a piece of meat hanging on a hook in a butcher shop. Unable to reach it by ordinary means, they formed a rough pyramid by piling onto one another until the topmost rat could reach the meat and gnaw it loose.

MANY other stories of rat “intelligence” are told, but experts generally feel that the incidents are greatly exaggerated. One such case is the story of a group of rats which formed a chain by grabbing one another by the tail to lower one of the band into a hole for food that could not be reached other-wise. But experts actually have seen a pair of rats stealing eggs by an odd method. One would wrap its tail around an egg and drag it off, while the other balanced the prize to prevent breakage.

It seems a far cry from stealing eggs to spreading pestilence and death. But scientists know that the rat, the scavenger of the garbage can and the pesthole, carries disease germs, pollutes water, and contaminates food. It spreads typhus fever, infectious jaundice, and the dreaded bubonic plagueâ€”the terrible “black death” that once ravaged Europe.

The Oriental rat flea that carries plague germs reached the Pacific coast of the United States about 1900. Since then, the few minor epidemics that have occurred have been quickly recognized and checked, thanks to the vigilance of medical science. Today, health departments all over the country regularly receive rat carcasses for examination.

BUT the battle is not confined solely to cities and seaports, for in small towns and on farms the rat hordes are even larger than in densely populated areas. Farmers know the rat as one of their greatest enemies, a carrier of disease to farm animals, a destroyer of grain, a marauder to be feared and fought. Authorities say that ravenous rats have attacked full-grown hogs, gnawing holes in the animals’ bellies. Thus in city, town, and farm, the war on rodents goes on. The conflict may prove endless, for rats multiply at an amazing rate. Under ideal conditions, the progeny of a single pair would theoretically reach the staggering total of 350,000,000 in three years. Year by year, however, official figures point to slow but steady progress as science gains ground in the crusade against rats.