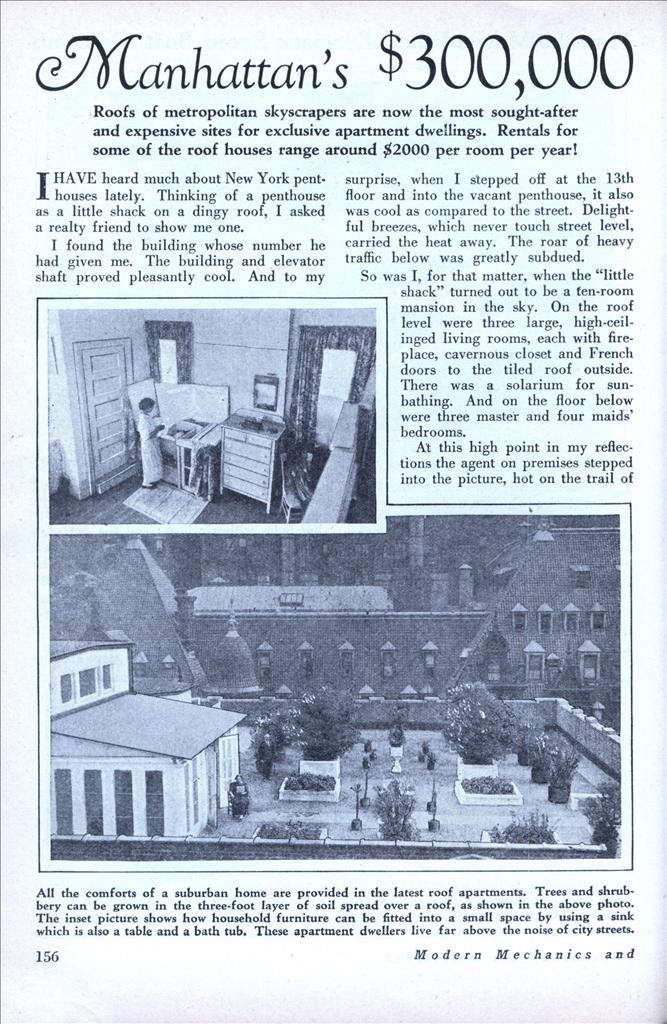 The Story of the Penthouse Apartment

Roofs of metropolitan skyscrapers are now the most sought-after and expensive sites for exclusive apartment dwellings. Rentals for some of the roof houses range around $2000 per room per year!

I HAVE heard much about New York penthouses lately. Thinking of a penthouse as a little shack on a dingy roof, I asked a realty friend to show me one.

I found the building whose number he had given me. The building and elevator shaft proved pleasantly cool. And to my surprise, when I stepped off at the 13th floor and into the vacant penthouse, it also was cool as compared to the street. Delightful breezes, which never touch street level, carried the heat away. The roar of heavy traffic below was greatly subdued.

So was I, for that matter, when the “little shack” turned out to be a fen-room mansion in the sky. On the roof level were three large, high-ceilinged living rooms, each with fireplace, cavernous closet and French doors to the tiled roof outside. There was a solarium for sunbathing. And on the floor below were three master and four maids’ bedrooms.

At this high point in my reflections the agent on premises stepped into the picture, hot on the trail of a prospect. As this seemed to be me, I asked him casually what I might rent the little dwelling for.

I hastily assured him that this was quite large enoughâ€”that I’d be back as soon as I had consulted my wife. My ardor cooled, I “hot-footed” it back to my realty friend who rents these tiny shacks for one of New fork’s largest firms.

“You ain’t seen nothing yet,” he informed me. “Several of the new penthouses on Fifth Avenue have sold for $300,000 each. Most of these are sold on the plans, before the building is started, and finished to suit. And we can’t finish them fast enough. On the east side alone there are probably 100 under way, on about 65 new apartments. Every building of this type now has from one to four penthouses.”

I asked him if he knew of any more available, at more nearly my financial size.

For various reasons, I have not yet returned to sign up for my penthouse.

Although Babylon had its hanging or terraced gardens, built to please a mountain-bred queen who was homesick, the modern movement to city roofs is only a few years old. As late as 1923 it was a matter of news when the head of a large realty firm announced his plans for an apartment on the roof of a new addition to the Plaza Hotel, overlooking Central Park. This had a formal Italian garden.

European architects have been amazed at American disregard for roof tops. For centuries We have used flat roofs merely as rain-and-snow sheds, as places for chimneys to emerge, and more recently as supports for “wireless” wires. At the same time, every large city has for years been crying for more park area.

Some cities, like New York, have even bought up whole tenement districts and torn down buildings to make breathing spaces. Yet the total roof area of a city almost equals that of the city itself, less streets and sidewalks. Enormous areas, estimated at three times the street space, are going to waste today. In future it is safe to predict that these roofs will be covered with homes, playgrounds, gardens, open-air restaurants and even parks. Large buildings now planned are especially suitable for roof dwellings and gardens. Architects now design roofs amply strong enough to support the most elaborate roof dwellings.