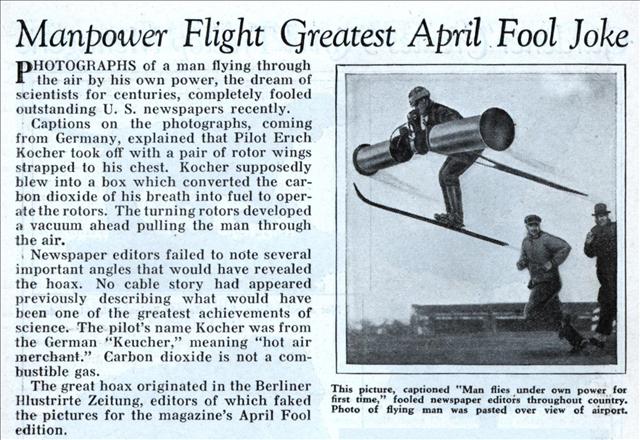 PHOTOGRAPHS of a man flying through the air by his own power, the dream of scientists for centuries, completely fooled outstanding U. S. newspapers recently.

Captions on the photographs, coming from Germany, explained that Pilot Erich Kocher took off with a pair of rotor wings strapped to his chest. Kocher supposedly blew into a box which converted the carbon dioxide of his breath into fuel to operate the rotors. The turning rotors developed a vacuum ahead pulling the man through the air.

Newspaper editors failed to note several important angles that would have revealed the hoax. No cable story had appeared previously describing what would have been one of the greatest achievements of science. The pilot’s name Kocher was from the German “Keucher,” meaning “hot air merchant.” Carbon dioxide is not a combustible gas.

The great hoax originated in the Berliner Illustrirte Zeitung, editors of which faked the pictures for the magazine’s April Fool edition.