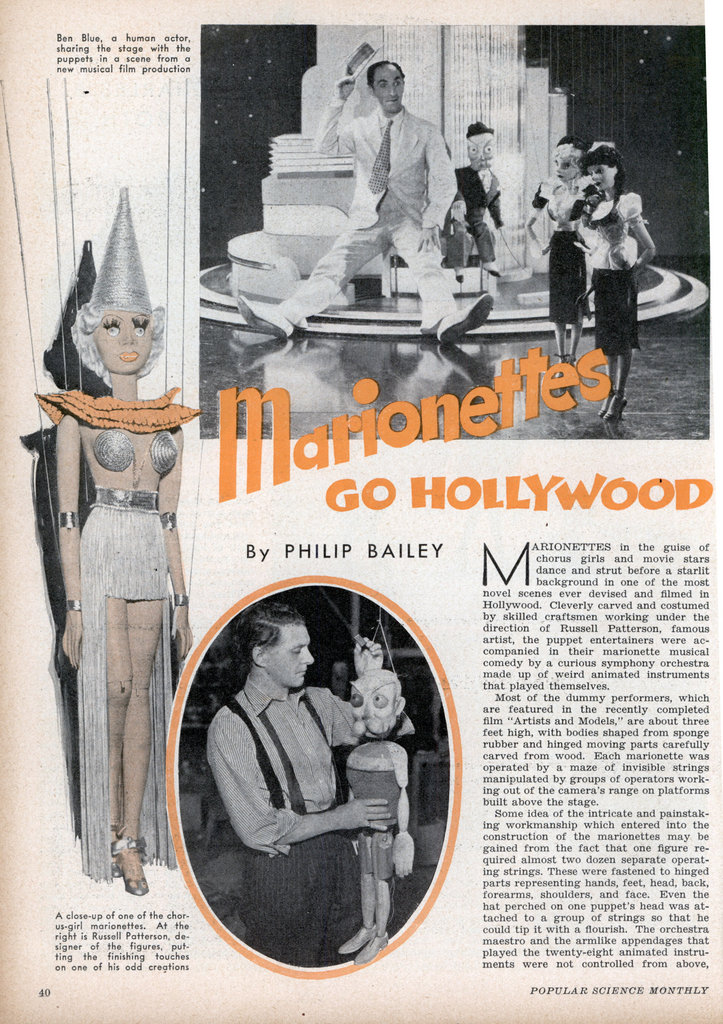 Some idea of the intricate and painstaking workmanship which entered into the construction of the marionettes may be gained from the fact that one figure required almost two dozen separate operating strings. These were fastened to hinged parts representing hands, feet, head, back, forearms, shoulders, and face. Even the hat perched on one puppet’s head was attached to a group of strings so that he could tip it with a flourish. The orchestra maestro and the armlike appendages that played the twenty-eight animated instruments were not controlled from above, however, but were moved realistically by wires extending down through the orchestra platform, which was built on an elevator so that it could be raised or lowered in front of the stage for the various scenes.

Startling effects were obtained by having the eyes and the mouths of some of the puppets move. As silk-haired marionette chorus girls swirled out from the wings, pranced across the stage, and went through an intricate dance routine, their long, curling eyelashes fluttered coyly in response to the movements of the invisible strings threaded through concealed holes drilled in their heads. The mouths of puppets who form a feminine musical trio for one scene were mounted on hinged sections so delicately balanced that the dummies appear to be actually pronouncing the words of the song they are supposed to be singing.

Perhaps the most remarkable feat achieved by the marionette operators was their expert handling of the puppets during the scenes in which a comedian strolls out on the diminutive set to strut like a Gulliver on a Lilliputian stage. Cleverly manipulating the hundreds of strings so that they would not become entangled with the human performer, the operators were able to manage as many as a dozen marionettes as they clustered about the comedian, aped his gestures, or climbed up on his knee.