“Doctor” Hugh Mansfield Robinson was an LLD or Dr of Law in England.  The rest of the story may be found here. 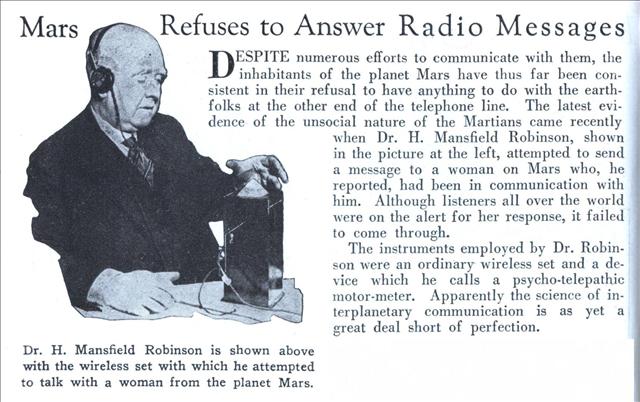 DESPITE numerous efforts to communicate with them, the inhabitants of the planet Mars have thus far been consistent in their refusal to have anything to do with the earth-folks at the other end of the telephone line. The latest evidence of the unsocial nature of the Martians came recently when Dr. H. Mansfield Robinson, shown in the picture at the left, attempted to send a message to a woman on Mars who, he reported, had been in communication with him. Although listeners all over the world were on the alert for her response, it failed to come through.

The instruments employed by Dr. Robinson were an ordinary wireless set and a device which he calls a psycho-telepathic motor-meter. Apparently the science of interplanetary communication is as yet a great deal short of perfection.