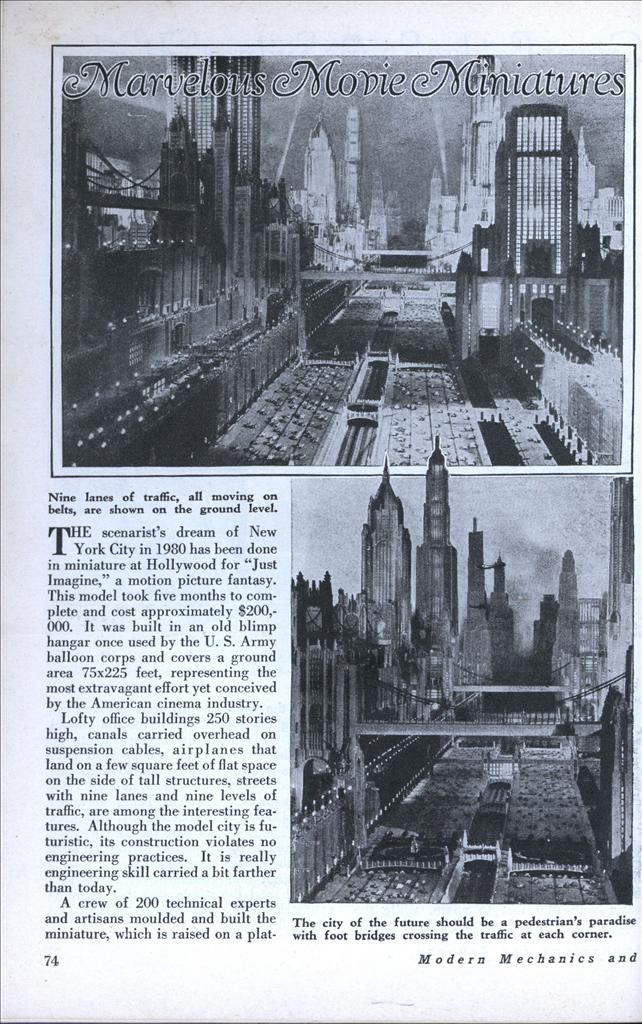 THE scenarist’s dream of New York City in 1980 has been done in miniature at Hollywood for “Just Imagine,” a motion picture fantasy. This model took five months to complete and cost approximately $200,000. It was built in an old blimp hangar once used by the U. S. Army balloon corps and covers a ground area 75×225 feet, representing the most extravagant effort yet conceived by the American cinema industry.

Lofty office buildings 250 stories high, canals carried overhead on suspension cables, airplanes that land on a few square feet of flat space on the side of tall structures, streets with nine lanes and nine levels of traffic, are among the interesting features. Although the model city is futuristic, its construction violates no engineering practices. It is really engineering skill carried a bit farther than today.

A crew of 200 technical experts and artisans moulded and built the miniature, which is raised on a platform above the ground. More than five tons of plaster, to say nothing of hundreds of pounds of lumber, glass and other materials, were employed in this “giant” miniature, the tallest tower of which is 40 feet high â€” which would be close to 2000 feet in actuality. The model is built to a scale of one-fourth inch to one foot.

The utmost fidelity to truth was observed in making this set. No details of exterior construction were left undone. Even real glass was used for windows, and the plaster was colored just the same as in real structures.