Science And Mechanics
Issue: Nov, 1931
Posted in: Sign of the Times
2 Comments on Marvels in Newest Theater (Nov, 1931) 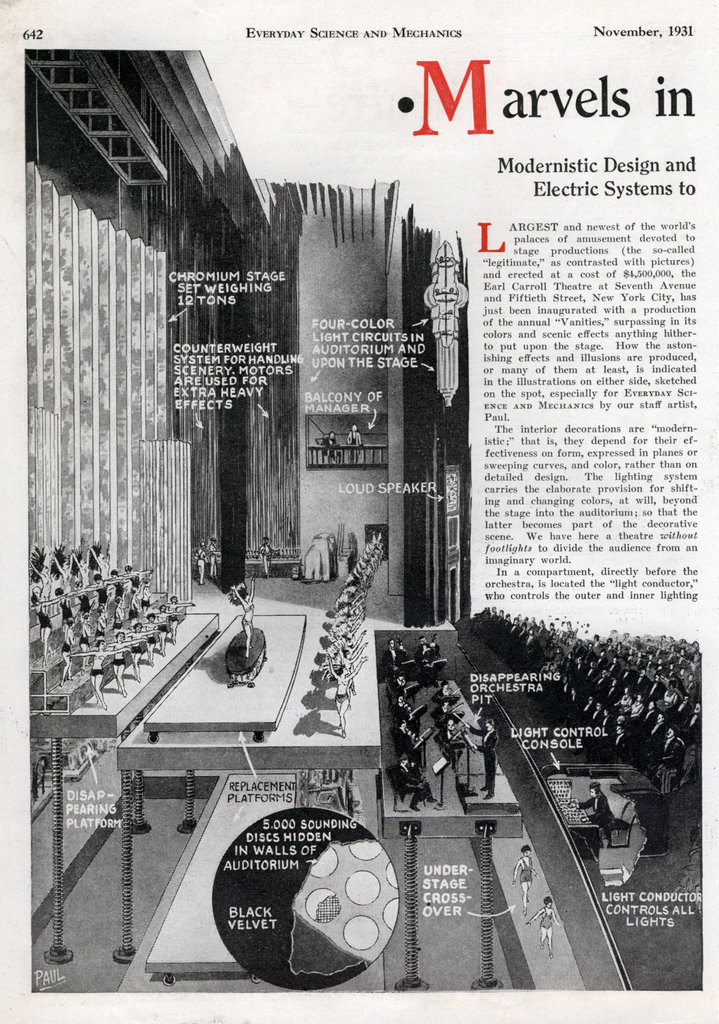 LARGEST and newest of the world’s palaces of amusement devoted to stage productions (the so-called “legitimate,” as contrasted with pictures) and erected at a cost of $4,500,000, the Earl Carroll Theatre at Seventh Avenue and Fiftieth Street, New York City, has just been inaugurated with a production of the annual “Vanities,” surpassing in its colors and scenic effects anything hitherto put upon the stage. How the astonishing effects and illusions are produced, or many of them at least, is indicated in the illustrations on either side, sketched on the spot, especially for Everyday Science and Mechanics by our staff artist, Paul.

The interior decorations are “modernistic;” that is, they depend for their effectiveness on form, expressed in planes or sweeping curves, and color, rather than on detailed design. The lighting system carries the elaborate provision for shifting and changing colors, at will, beyond the stage into the auditorium; so that the latter becomes part of the decorative scene. We have here a theatre without footlights to divide the audience from an imaginary world.

In a compartment, directly before the orchestra, is located the “light conductor,” who controls the outer and inner lighting effects of the theatre from a console, like that of an organ. This, which takes the place of the old-time lighting switchboards, is made compact by the use of vacuum-tube relay circuits, which control the heavy lighting current at the touch of a key.

On both sides of the proscenium are quadruple lighting circuits, controlling lamps of various colors; so that any blend of light-hues desired may be produced. The old-time “spotlight” has been replaced by batteries of lights from the front of the loges, the apex of the auditorium, and the proscenium arch itself, which divides stage and auditorium.

The mechanical devices used to change the scenes for so large a theatre are elaborate; they not only raise scenes from the stage, but lower them; the region beneath the stage being the repository of many rolling platforms, carrying settings for various acts. Disappearing platforms, raised or lowered at will like elevators, bring a whole ensemble or chorus, in new costumes with a new scene, upon the stage level, and quickly dispose of them at the end of a number. Since nearly sixty of these are combined into a single evening’s production of the “Vanities,” the utmost rapidity of scene shifting is required, and obtained in this way.

One gleaming metallic scene, illustrated (at the left) as it appears on the stage, is of chromium and weighs 24,000 pounds, requiring special handling. Others are balanced by counterweights, for smooth hoisting into the “flies” (which are double, one above the other), or moved into the depths of the large elevator platforms; and, similarly, orchestras or bands are shifted and surrounded by new settings on the disappearing orchestra platform, which is an enlargement of the original device, created by the same producer, for the earlier Earl Carroll Theatre on the same spot.

ONE of the most elaborate numbers in the new production is “Two Hundred Million Years Ago,” in which a prehistoric 45-foot dinosaur makes his appearance out of the books on paleontology. How his realistic motions are achieved, the illustration at the lower right indicates quite plainly. The huge bulk is too heavy, actually, to walk; but the corresponding movements of the limbs are effected by the crew, while the enormous figure slides along its platform giving the illusion of reptilian life and movement. It will also be noted that precautions are taken against the necessity of renewing the monster’s attractive diet too often.

The appointments of the theatre, for both performers and audience, reach a new high level. In addition to the traditional “Green Room,” for principal actors off stage, there is an “Orchid Room” for the chorus; and mass-production methods are employed in the costuming, as will be seen, in the form of powder sprayers which do the work of a thousand puffs. The “Mirror Room” has an astonishing kaleidoscopic effect, in which the chorine, who has just made another quick change of her costume, may survey it from every angleâ€”front, back, and sidesâ€”to verify the finishing touches, as she hurries along for the next appearance. An underground crossover system serves the same purpose as street subways; and an amplifier system, required by the magnitude of the system of dressing rooms, makes the necessary announcements to the cast. The theatre contains also a practice room, for rehearsals; a soundproof studio, for radio broadcasting; club and recreation rooms for various employees, as well as for the artists; and a cabaret for after-theatre entertainment is being completed beneath the main floor.

In the auditorium, a new system of acoustic treatment, devised by the late Emil Berliner (inventor of the telephone transmitter) has been applied to the walls to produce perfect sound distribution. As shown in a detail sketch, black velvet covers the walls, with over 5,000 sound-reflecting discs mounted beneath.

Novel reading lamps, attached to the back of the seats, do not disturb the lighting effects, but make it possible to follow the numerous changes of scene and turns in the theatre program; while aisle lamps mark the positions of seats for the late comers who are always to be found in the metropolitan district. The theatre is furnished with conditioned air, warmed or cooled, as need be, to a comfortable temperature. A paging system, also connected to a public address amplifier, permits members of the audience to be called between acts, or in the lounges and retiring rooms.

There are little details and innovations, too many to list here. Illuminated shoes are worn in ballet numbers; a little switch on the side of each shoe is deftly operated by the other foot during the dance, with firefly effect. (A pair of flashlight batteries is consumed by each dancer, at each performance.) Another feature of which we are advised is the provision of refrigerated storage for the performer’s flowersâ€”surely a “last word.”

And one thing moreâ€”this theatre has no “box office.” Another time-saving measure; seats are sold from an open counter. The seating capacity is 3,000.