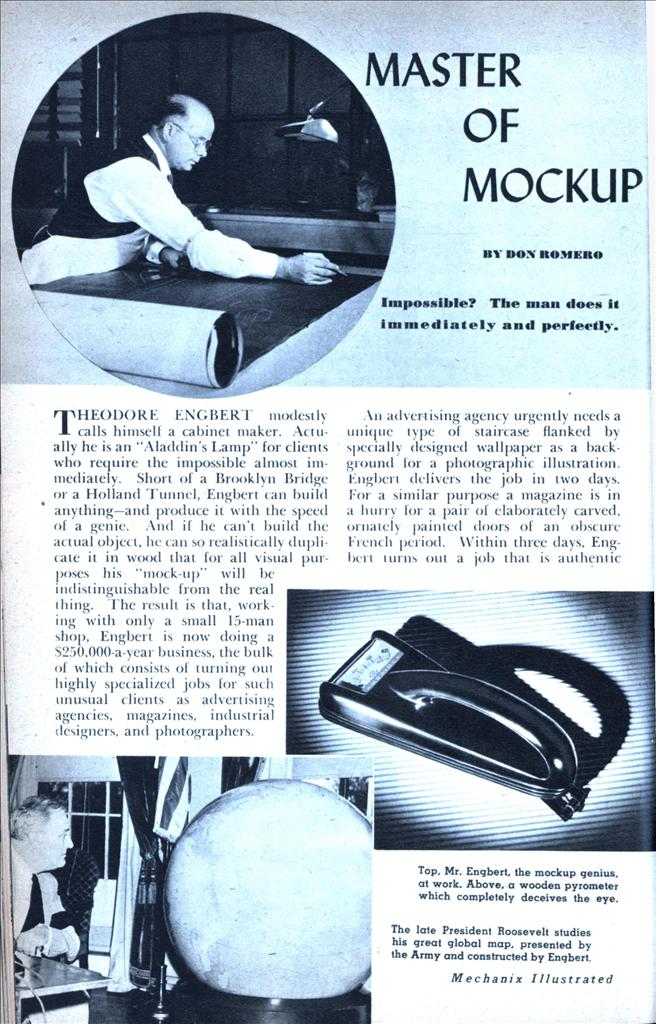 Impossible? The man does it immediately and perfectly.

THEODORE ENGBERT modestly calls himself a cabinet maker. Actually he is an “Aladdin’s Lamp” for clients who require the impossible almost immediately. Short of a Brooklyn Bridge or a Holland Tunnel, Engbert can build anything—and produce it with the speed of a genie. And if he can’t build the actual object, he can so realistically duplicate it in wood that for all visual purposes his “mock-up” will be indistinguishable from the real thing. The result is that, working with only a small 15-man shop, Engbert is now doing a $250,000-a-year business, the bulk of which consists of turning out highly specialized jobs for such unusual clients as advertising agencies, magazines, industrial designers, and photographers.

An advertising agency urgently needs a unique type of staircase flanked by specially designed wallpaper as a background for a photographic illustration. Engbert delivers the job in two days. For a similar purpose a magazine is in a hurry for a pair of elaborately carved, ornately painted doors of an obscure French period. Within three days, Engbert turns out a job that is authentic down to the minutest detail. The Eastman Kodak Company wants to publicize a modern store which has been specially designed lor the selling of photographic supplies. Engbert goes to work building the entire job right in his own shop and eight days later Eastman’s photographers shoot the “store” from every angle. A cosmetic designer is in a rush lor a specially shaped bar of soap which he can show to soap manufacturers. Engbert turns the job out in 24 hours. An industrial designer is in a hurry for a model of a new streamlined typewriter. Engbert gives it to him in four days. Another designer wants a post-war camera, a second needs a unique type of bathtub, a third has to have a certain kind of whisky bottle. In each case Engbert turns out a precision-made job with lightning speed. The bar of soap, of course, won’t lather, the typewriter won’t type, the camera won’t click, the bathtub won’t tub, and the whisky bottle won’t yield a drink—since all are made entirely of wood. Yet so realistically has Engbert turned out each piece that for purposes of display or photographic illustration every one of them is as good, if not actually better, than the real McCoy.

Engbert’s cabinet-making career has been exceptional right from the start. During World War I, when he was a German youngster in his early teens, he got himself a job as an apprentice in a furniture factory in the town of Minister, Westphalia. For the first few months nothing much happened while he applied himself to the laborious job of slowly learning his trade. And then one clay a group of Russian. Belgian, French, and English prisoners of war were brought in to work in the factory. From then on Engbert’s apprenticeship soared like a meteor. Practically every one of the prisoners turned out to be not only a master craftsman but also a specialist in the type of cabinet-making in vogue in his particular country. Working side by side with these men, Engbert spent the next two years soaking up their techniques and invaluable trade secrets like a thirsty sponge. By the time the war had ended he had accomplished the incredible feat of acquiring a “world-wide” education in cabinet-making without ever once setting foot outside the little town of Munster.

The next seven years Engbert spent putting his education to the test. He traveled throughout Germany building furniture and also studying an as-yet unlearned side of his trade—the installing of “built-in” items such as bookcases, panels, and closets. In 1925, with a growing confidence that was now backed up with a lot of real experience, he came to America. Although he temporarily got himself somewhat stymied in a Pennsylvania furniture factory, he soon found just the niche he wanted. He landed a job with an old-time craftsman who had developed a lucrative business turning out custom-built furniture for wealthy New York clients.

This proved to be just the right stage for Engbert’s talents. He promptly proceeded to demonstrate his amazing knack for speedy production by turning out 25 armchair frames, 25 wing chair frames, and 25 sofa frames in exactly three days. In the months that followed he repeatedly showed that he could turn out one tough assignment after another with the most exacting skill.

From then on Engbert was recognized as the “sparkplug” of the business. Hinting strongly that they would be delighted to give him all their work, customers began to urge him to go into business for himself. Engbert refused. His employer, who was getting on in years, had promised to leave him the business. Engbert was loyally willing to wait until the old man retired. A year later, however, when Engbert found that his supposedly philanthropic employer had secretly sold the business to a competitor, he indignantly stamped out of the shop—and took every one of the old man’s clients along with him. Since then Engbert has been sparkplugging his own business.

On going in for himself, Engbert took along a fellow worker, Joseph V. Cummings, as a partner. The firm has been singularly successful from the first day. Up to the start of the war it was doing a cozy $110,000-a-year business. During the war this jumped to the quarter-of-a-million mark. Yet never during the 15 years of its existence has the firm employed a salesman, advertised its work, or solicited business in any way. “My products are my salesman,” say Engbert shrewdly. “People see the quality of the work I do for their friends and then come and ask me to do the same kind of work for them. That’s why no matter how fast I work, it always pays me to do a careful job. That’s also why I haven’t lost a customer in 15 years.”

Although Engbert’s methods are comparatively orthodox in that he usually works from blueprints or sketches of his own design and uses the most modern machines known to the trade, there is one notable feature that distinguishes his work from that of most other cabinet makers. He steadfastly refuses to use nails. “Nails!” he snorts indignantly. “I wouldn’t have one in the place!”

The result is that even on the simplest and most urgently needed job he will meticulously put the various parts together by means of dovetail, tongue-and-groove, or dowels and waterproof glue—which is probably one reason why most interior decorators consider him the best cabinet maker in the country.

Bespectacled, medium-sized, slightly bald, Engbert is a soft-spoken man who goes about his work with a quiet intentness. Yet there are times when the pressure of filling a seemingly impossible order almost gets the best of him. When this happens he will shake his head and mutter wearily, “This is not a business. This is a crazyhouse.”

His clients have come to expect so much of him that they literally believe him capable of anything. During the war, green oil paint and certain types of decorative hardware became almost extinct. Yet time and again his trusting clients casually asked him to produce these items at a moment’s notice. Other clients made even more impossible demands: would he please find a maid who was a good cook; would he kindly ferret out a three-room apartment with a fireplace; would he please hurry and dig up a case of Scotch; would he please recommend a reliable “baby-watcher.” Although, miraculously enough, Engbert is often able to fill such amazing “orders,” it is getting so that he is reluctant to answer the phone. “My shop is getting to be like Information Please,” he now periodically exclaims.

Engbert has turned out custom-built furniture for city apartments, private country homes, hotels, stores, transcontinental planes, even ocean-going liners. Yet the jobs he most enjoys are the impossible ones that have to be done in a hurry. Some of those he has done have been just short of miraculous. For a magazine he once duplicated a tile bathroom floor by simply using a piece of masonite which he ingeniously painted so as to look like the real thing.

For an industrial designer he created out of wood an electric clock and a clothes iron which were so realistic that it took a bit of explaining to convince an electrical manufacturer that they weren’t authentic. For a photographic shot he turned out an elaborately decorated dinner plate that couldn’t be distinguished from the rest of the china set. For Henry Dreyfus, designer of the 204-passenger Model 37 airplane which Pan American Airways plans to put into trans-oceanic service, he built a one-to-thirty scale model as well as various sections of the ship in actual size.

For another designer he once duplicated the entire instrument panel of a four-motor bomber. For still another designer he duplicated a tailor’s clothes-pressing machine that was accurate to the smallest detail. For a manufacturing firm he duplicated an intricate corn-picking machine that was intended to revolutionize the industry. For an advertising agency he built an entire kitchen complete with gas stove, refrigerator, sink, faucet, plumbing, and dishwashing machine—all out of wood.

For household magazines interested in showing how rooms can be improved with the proper furniture and decorations, Engbert frequently builds the entire room as well as every stick of furniture that goes into it. For a magazine that once called him at three o’clock in the afternoon, he made a uniquely-designed coffee table made of California redwood and covered with a special pickled finish—and delivered it at nine o’clock the next morning. For illustrator Jon Whitcomb he recently turned out a four-foot coffee table in the shape of an artist’s palette. And for the late President Roosevelt, he built a huge globular map, so constructed that it will not expand or contract in temperature changes.

Of all Engbert’s unusual jobs, however, perhaps the most exceptional was his replica of a doughnut-making machine. Summoning all his mastery, he carefully duplicated all the various gadgets that went to make up the contraption and then cleverly painted the whole thing so as to make it look like metal. Even the oil in the cooking vat he was able to duplicate by laying a piece of colored cellophane across the top of the vat. Proud of his job, he eagerly awaited the photograph that was to be taken of it. When he finally saw the photograph he was crushed. Swimming around in the “oil” was a real doughnut which he had forgotten to duplicate.