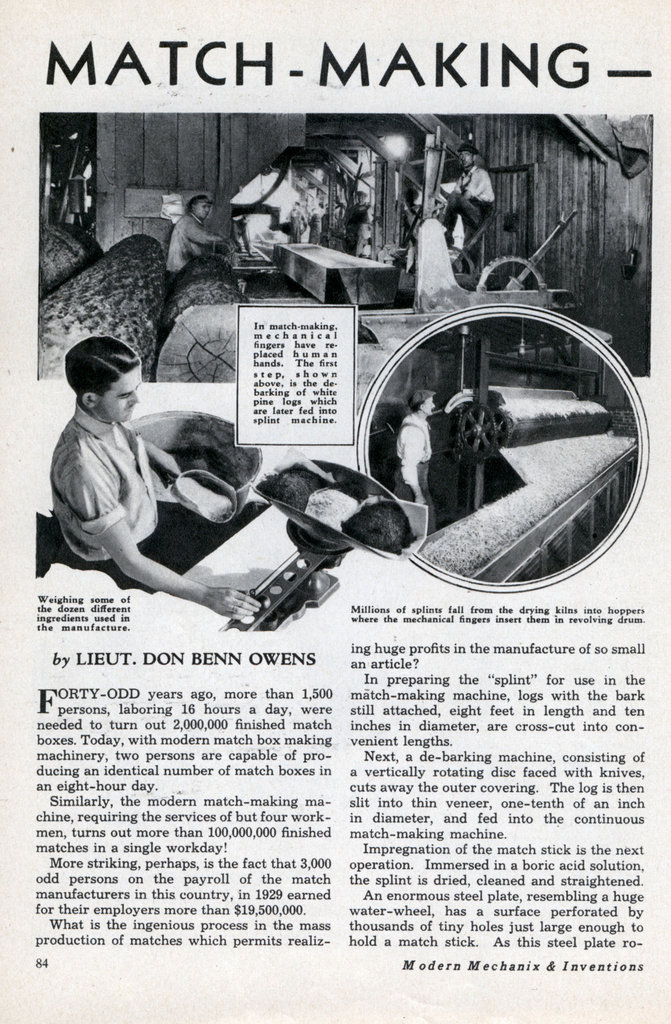 FORTY-ODD years ago, more than 1,500 persons, laboring 16 hours a day, were needed to turn out 2,000,000 finished match boxes. Today, with modern match box making machinery, two persons are capable of producing an identical number of match boxes in an eight-hour day.

Similarly, the modern match-making machine, requiring the services of but four workmen, turns out more than 100,000,000 finished matches in a single workday!

More striking, perhaps, is the fact that 3,000 odd persons on the payroll of the match manufacturers in this country, in 1929 earned for their employers more than $19,500,000.

What is the ingenious process in the mass production of matches which permits realizing huge profits in the manufacture of so small an article?

In preparing the “splint” for use in the match-making machine, logs with the bark still attached, eight feet in length and ten inches in diameter, are cross-cut into convenient lengths.

Next, a de-barking machine, consisting of a vertically rotating disc faced with knives, cuts away the outer covering. The log is then slit into thin veneer, one-tenth of an inch in diameter, and fed into the continuous match-making machine.

Impregnation of the match stick is the next operation. Immersed in a boric acid solution, the splint is dried, cleaned and straightened.

An enormous steel plate, resembling a huge water-wheel, has a surface perforated by thousands of tiny holes just large enough to hold a match stick. As this steel plate rotates, almost human fingers pick up the match sticks from the hopper and insert them in the tiny perforations on the cylinder. When all the holes are filled, the cylinder moves forward along the metal table, warming the splints over a heated metal block to absorb paraffin. The cylinder revolves once inside the molten paraffin basin, then moves on to the “striking compound” to form the ignition head of the match.

When the splints are thoroughly impregnated, the cylinder passes over the metal hotplate. By the time it reaches the end of the table the splints are entirely dry and ready for packing.

Here metal ringers again snap into action, grasping the matches in huge handfuls and piling them in boxes. As the boxes are rilled, a conveyer moves them to the packing room where they are crated for maëket. In the shipping room the match comes in contact with human hands for the first time. All previous operations from the moment the match splints entered the hopper were entirely automatic.

The speed of the continuous match-making machine may be set according to factory requirements from 175 to 475 revolutions a minute. A single revolution of the cylinder completely finishes an operation.

While a box of 500 matches sells for only a nickel, the cost of match-making materials used is really negligible. As a matter of fact, four persons operating one machine can, in eight hours, turn out matches with a retail value of more than $10,000!

The manufacture of the match box, an indispensable part of the match industry, likewise demands low cost production. A roll of strawboard paper, cut to the proper width and lined with pink or white paper, is placed in an ingenious machine. The strawboard paper is scored or marked at the four corners, then glued, folded into an endless tube and passed through a press where it is imprinted on three sides.

Another machine coats sand or ground glass for a striking surface on the fourth side. One of these machines can turn out 24,000 finished boxes hourly.

Book matches are manufactured by an entirely different type of machinery. Wood or tough fiber is cut into “combs,” dipped into0match-making compound, dried, packed and marketed in the more convenient pocket form.

More than 11 per cent of the matches used by Americans are brought into the country from Japan. France. Sweden and Norway.