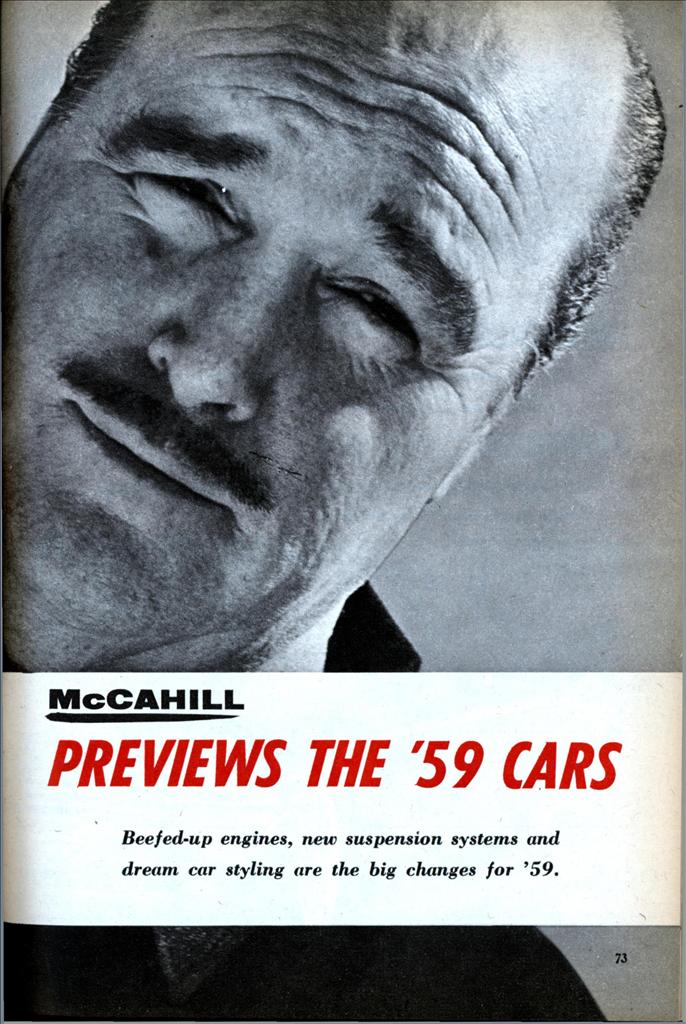 IT’S likely that 1959 will go down in automotive history as the year that automobile manufacturers—hurt by the ’58 sales slump—went all out to whet the appetites of the car-buying public. Beefed-up engines, new suspension systems and dream car styling are just three of the goodies offered with the hope of starting those “low down payments” rolling in once again.

The following is an introduction to the top 1959 cars released as of this date. If they don’t hit you right between the eyes and start you grabbing for your wallet, a lot of Detroit automobile men will be oiling up their squirrel guns and heading for the woods. A guy’s got to eat somehow.

Plymouth for 1959 is the best car of the low-priced three, in our baldheaded opinion, and we’ve tested all of them. The new model retains its top quality ride, the best in its field, and it may prove to be the only ’59 car which has actually improved in performance. The looks of the new sports sedan (on which we will soon bring you a full test) are tops. The Plymouth is loaded with innovations such as front seats that swivel to the side for easy entrance and exit. The general finish has been upgraded so it ranks with any of the top medium-price offerings.

The writer drove a new Plymouth at a full 120 mph for over 40 miles and has never had a more comfortable high-speed ride in his life. This car is equipped with the “395” Golden Commando 361-cu. in. mill and has 10:1 compression ratio.

Ford, the originator of ball-joint suspension in the Big Three class, is still a top-flight handling car when equipped with coil spring suspension. However, the suspension has been lightened up this year, which has taken away some stability. The styling, though changed completely, nevertheless retains a certain amount of Ford looks from the past. The taillights, which one top Ford official told me hurt sales in ’58, have been altered to big bull’s-eyes. There has been no improvement in over-the-ground performance over the ’58 models, possibly due to increasing the weight while retaining the same engine sizes.

The Chrysler line consists principally of the Windsor, Saratoga and New Yorker, plus the hairy-chested 300E. The Windsor and Saratoga have 383-cu. in. engines with 10:1 compression ratio. The big New Yorker will sport a 413-cu. in. mill, as will the 300E. Despite this increased engine size, they will weigh 100 lbs. less than in ’58 which will improve weight distribution.

In ’59, Chrysler has added optional rear air suspension to their top-flight torsion suspension. Having driven some of the vehicles, the writer can only comment that the air suspension doesn’t seem to have done any harm. Instrument panels have been changed considerably. Also featured is an “electronically-controlled rear view mirror.” Gad! New Yorker wheelbase is 126″; overall length 220.9″; overall width 79.5″; overall height 57.5″.

Imperial was our choice as the greatest car built in America in 1958. I’ve seen nothing to alter this opinion in 1959. In a short test ride I gave the new Imperial, there was no breakdown of top handling quality despite its air suspension, even at speeds as high as 122 mph. The instrument panel has been completely reworked. The power plant has been upped in size from 392 cu. in. to 413, with 10:1 compression ratio and 100 lbs. less weight in the engine.

When I asked an Imperial man about the rear air suspension—used as an addition to regular leaf springs—he said the principal function was to keep the car level regardless of the trunk load. If the new model handled any better than the ’58, I failed to find the difference. However, last year’s Imperial was far advanced over the competition in handling and driving ease, and its superiority will probably remain unchallenged through ’59.

Dodge has undergone heavy styling changes in 1959 yet maintained some of its former characteristics, such as the broken nose profile of the tail line. On the four-door hardtops, the roof and rear windows have been re-styled and the front end is as new as next February’s cold. Dodge will offer a six-cylinder engine in addition to its V8. The six-cylinder job will displace 230 cu. in.

Pontiac for 1959 has undergone complete restyling, to such a thorough degree that if the nameplates were removed, not one automobile man in 1,000 could tell you that the product was made by General Motors, much less that it was a Pontiac. They’ve come up with what may very well prove to be the Looks King of the year. Pontiac is the performance champion of the General Motors camp. This is the car that ran away with the performance trials at Daytona Beach in ’58 and they’ll again be the cars to beat in 1959. Powered by a great 389-cu. in. engine that gets them over the ground like a greased missile, the Pontiacs are the rulers of the traffic light Grand Prix.

Oldsmobile for 1959 is longer, wider and has a 46 per cent larger windshield in the four-door sedan. The trunk capacity has been upped 64 per cent! Jim McMichael, the world’s foremost trunk-tester, has been gaining weight in order to keep pace with this trend. One of the things Oldsmobile is featuring in ’59 is a rear window which, they claim, actually allows rear seat passengers to look up into the sky through the “heat resistant” rear glass. The Super 88 and 98 Oldsmobile for this year will have 394 cu. in. in the engine department. Larger intake valves have been added, according to Oldsmobile, which hardly seems surprising on a larger engine. The wheelbase of the 88 Series has been upped to 124 in. and the tire size on the 88 and 98 is now 9.00×14. The brakes have been increased in size.

Cadillac has really changed in ’59; its styling throughout the line has been upgraded to resemble former Eldorado models. This year the engine is up to 390 cu. in., though remaining basically the same as in previous years. It has also been bored to four inches from 3.91 and the stroke has been lengthened from 3.31 to 3.875. Air suspension is on all four wheels, tied up with new Freon 12 shock absorbers which give “an amazingly soft ride.”

The Rambler American, American Motors’ hot-selling little cake, will add a station wagon in 1959. As far as this department can determine, this is a rebirth of the small Rambler wagon of several years ago. The American is a great buy and, if the station wagon isn’t just a little too small for a wagon, it should prove a hot item, too. When these Americans were formerly known as just Ramblers they featured air-conditioning. It wasn’t available on the American in 1958. Why is a mystery to this department and we think it’s pretty stupid if it isn’t this year.

The’ Ambassador looks like a Rambler with a longer name. If you make a practice of looking under all rugs, as I do, something hits you right in the eye: the four-door sedan only weighs 3,460 lbs., yet is powered by a 327-cu. in. engine developing 270 hp. As this is about 500 lbs. less than some deluxe models of Chevrolets, Fords, Plymouths and a few others, the Ambassador should be a real bomb. If the horsepower and torque figures (360 ft. lbs.) are right, this car might be able to kick hell out of the under-350 cu. in. class at Daytona.

Summing up, it looks like it will be a busy model year for this writer. Back in ’57 all cars were getting to be so much alike and performance so similar, there seemed to be little need for a car tester.

When I started testing automobiles for MI 13 years ago, the American automobile was a pretty miserable hunk of nothing. By ’57, due to the pressure of racing competition—and partly due to these car tests —every car on the road had improved in handling, roadability, suspension, brakes and performance. It began to look as if my working days were over.

I’m happy to report that I’m back in business again because I’m sorry to say that some of the worst-performing cars of the decade will be in showrooms this fall. Famous cars that handled well just a year or two ago have again become sloppy, ill-mannered and dangerous. Brakes have been improved on some cars in ’59 but stability has been shot to hell in many camps. Performance in general, particularly acceleration, has fallen off considerably, except in one or two cars. Styling and that inevitable “softer ride” have taken the ball once again.

In our tests of the ’59 cars during the coming model year we’ll be pointing out some of these dangerous drawbacks in more detail. Meanwhile, be warned that ’59 is a year for careful shopping. Some cars are greater than ever. Some are real dogs. And remember, it costs just as much to feed a mutt as it does a purebred. •