Modern Mechanix
Issue: Sep, 1930
Posted in: How to
No Comments on Mechanical Aids Help the Stage Illusionist (Sep, 1930) 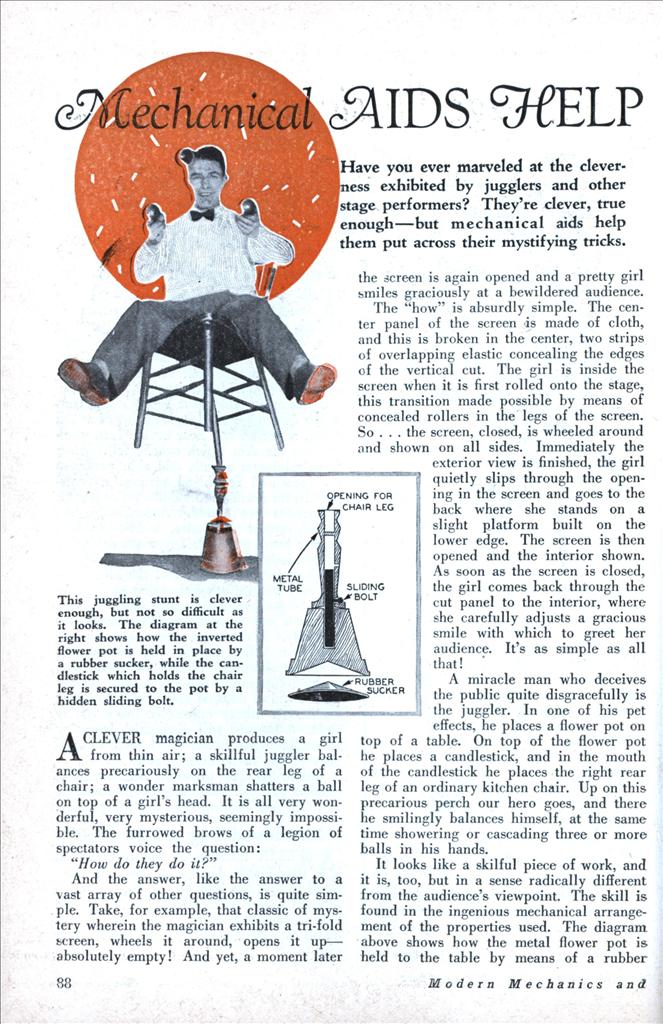 Have you ever marveled at the cleverness exhibited by jugglers and other stage performers? They’re clever, true enoughâ€”but mechanical aids help them put across their mystifying tricks.

A CLEVER magician produces a girl from thin air; a skillful juggler balances precariously on the rear leg of a chair; a wonder marksman shatters a ball on top of a girl’s head. It is all very wonderful, very mysterious, seemingly impossible. The furrowed brows of a legion of spectators voice the question: “How do they do it?”

And the answer, like the answer to a vast array of other questions, is quite simple. Take, for example, that classic of mystery wherein the magician exhibits a tri-fold screen, wheels it around, opens it upâ€” absolutely empty! And yet, a moment later the screen is again opened and a pretty girl smiles graciously at a bewildered audience. The “how” is absurdly simple. The center panel of the screen is made of cloth, and this is broken in the center, two strips of overlapping elastic concealing the edges of the vertical cut. The girl is inside the screen when it is first rolled onto the stage, this transition made possible by means of concealed rollers in the legs of the screen. So . . . the screen, closed, is wheeled around and shown on all sides. Immediately the exterior view is finished, the girl quietly slips through the opening in the screen and goes to the back where she stands on a slight platform built on the lower edge. The screen is then opened and the interior shown. As soon as the screen is closed, the girl comes back through the cut panel to the interior, where she carefully adjusts a gracious smile with which to greet her audience. It’s as simple as all that!

A miracle man who deceives the public quite disgracefully is the juggler. In one of his pet effects, he places a flower pot on top of a table. On top of the flower pot he places a candlestick, and in the mouth of the candlestick he places the right rear leg of an ordinary kitchen chair. Up on this precarious perch our hero goes, and there he smilingly balances himself, at the same time showering or cascading three or more balls in his hands.

It looks like a skilful piece of work, and it is, too, but in a sense radically different from the audience’s viewpoint. The skill is found in the ingenious mechanical arrangement of the properties used. The diagram above shows how the metal flower pot is held to the table by means of a rubber sucker. It shows how a sliding iron bolt slips down into a metal tube in the flower pot. It shows how the chair leg is slightly bent in order to fit into the recess in the top of the candlestick. Naturally enough, the performer can well afford to smile and exercise his little skill in juggling three balls when he knows that everything below him is as strong as the rock of Gibraltar. Other wonders of the stage miracle men are equally simple. There is that little trick of the stage marksman which calls for the extinguishing of a cigarette held in the mouth of an assistant. It is very realistic. You see the red, glowing tip of the cigarette; you see the marksman draw up in position to shoot . . . And thenâ€”Bang! the gun is fired, and the cigarette glow is gone, apparently shot away by the bullet.

The audience imagine they have looked upon great skill. What really happens is something entirely different. In the first place, the gun is loaded with nothing more nor less than blank cartridges. The second part of the illusion has to do with the cigarette, which is cleverly prepared, as shown in the diagram, so that a sharp flick on the part of the assistant’s tongue sends the long needle darting forward and the ash is knocked from the cigarette tip. Properly timed, the illusion is perfect.

Stage sharpshooters, of course, cannot very well put on a whole program using nothing but blank cartridges. Occasionally they fire an actual bullet. Such is the case in the William Tell effect in which a ball is shattered as it reposes on the head of a fair assistant. The modus operandi differs somewhat. Although a real bullet is used, it never touches the ball. Instead, the modern William Tell aims at a large metal disk which is concealed behind the curtain before which the assistant is standing. This disk is attached to one end of a short rod which is pivoted in the center, the other end housing a sharp spike which swings through a slit cut in the curtain. When the sharpshooter fires, he takes care to strike the curtain about twelve inches above the head of the girl. The bullet will then hit the metal disk, which is padded to prevent ringing, and the spike will be shot forward through the slit in the curtain. The ball, which is a composite one of resin and chalk and very brittle, is shattered by the spike which immediately returns to its place of concealment behind the curtain. The lever is used in many other effects in stage sharpshooting. By the use of this principle, a bullet can be shot through a wedding ring and still break one or more balls. Many performers use a dummy in these effects, the lever being concealed in the dummy’s chest, and so arranged that by hitting it the shooter can knock articles from the dummy’s head or hands.

Mental telepathy, for which the public has had quite a flair in the past few years, employs many artifices. One of the simplest of these acts requires the medium to be securely blindfolded, a committee from the audience seeing to this part of the program. Nevertheless, she calls out the name and describes minutely any small object which her partner may receive on his tour through the audience. The effect, of course, depends upon the assistant concealed in the wings. He is equipped with a powerful field glass or telescope with which he views, through a slit in the curtain, the various items held up by the performer. The information is then relayed to the medium by means of a headphone set, with wires running under the stage covering, and the act goes along quite merrily.

And so it goesâ€”the most mystifying illusions of stage magicians are only the work of clever mechanics.