Modern Mechanix
Issue: Sep, 1938
Posted in: How to
Tags: how its made
3 Comments on MECHANICAL ARTISTS BLOW GLASS BOTTLES (Sep, 1938) 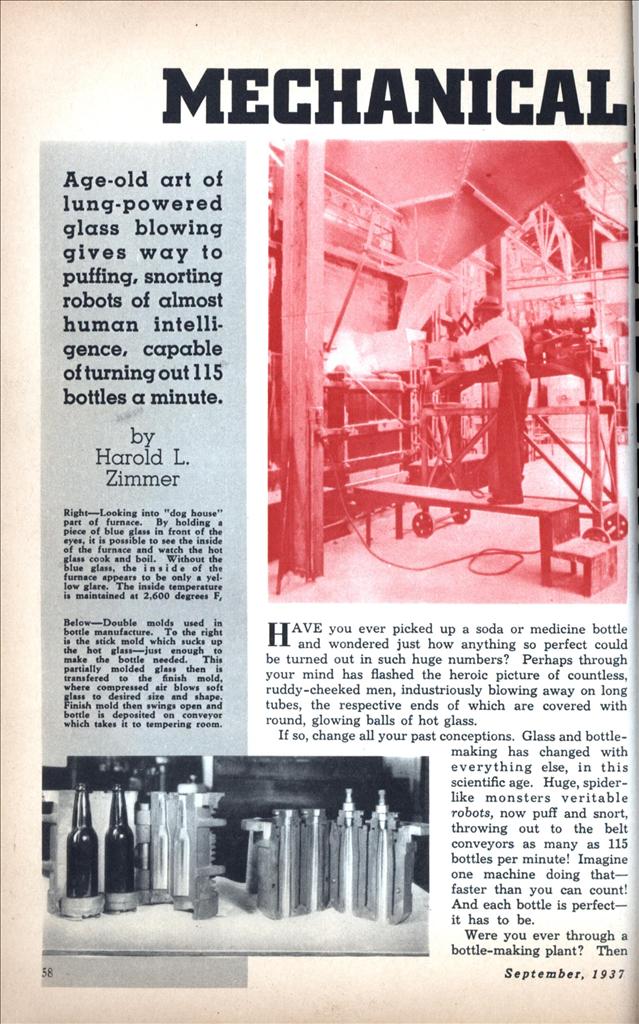 HAVE you ever picked up a soda or medicine bottle and wondered just how anything so perfect could be turned out in such huge numbers? Perhaps through your mind has flashed the heroic picture of countless, ruddy-cheeked men, industriously blowing away on long tubes, the respective ends of which are covered with round, glowing balls of hot glass.

If so, change all your past conceptions. Glass and bottle- making has changed with everything else, in this scientific age. Huge, spiderlike monsters veritable robots, now puff and snort, throwing out to the belt conveyors as many as 115 bottles per minute! Imagine one machine doing that— faster than you can count! And each bottle is perfect— it has to be.

Were you ever through a bottle-making plant? Then let’s go through one of the world’s largest. Here we’ll find the answer to all our questions and learn many interesting things as well.

If you wish to start from the cellar and work up, we’ll see just where it all begins: A flat-car on a siding is unloading fine, white silica sand. Another, soda-ash and another lime. These are the main ingredients. Each is carefully stored in overhead bins.

Below each bin opens a funnel-like mouth, with a heavy trip valve and an automatic scale arrangement which shows how much material is being poured. Underneath the bins runs a regular trolley track and car. We see a car approaching; first, the man operating it stops beneath the bin labeled “soda-ash.” He pulls the lever and watches the scale to see that the proper amount is poured. Next, he runs the car to the bin, “lime”; then, on to the sand. We might say that “cullet” (broken glass) is also added to the mixture. This is necessary to give the bottles greater strength and purity. If enough cullet or waste is not available, the glass manufacturer often has to buy it from outside sources.

After passing through several mixing operations, the raw material is transported on overhead trolleys to the “batch-bins,” which are directly over the mighty melting furnaces. As the material, or batch, is needed, it is poured into the mouth of the furnace. Let’s climb down, now, to the factory proper.

The point where the raw material enters the furnace is called the “dog-house.” Through a small peep-hole, a workman allows us to glimpse at the seething, bubbling inferno inside. At first, we see nothing but a yellow glare. The workman smiles: “Here, take this, “and he hands us a piece of blue glass. Lo! We can plainly see all about the interior!

The molten glass resembles thick gravy simmering and cooking in some gigantic kettle. Over the bubbling mass, roaring gas jets are shooting flames. The glass cooks upside down, heating from the top!

The lake of glass inside is about 40 inches thick and is so hot it burns through fire-proof brick! A furnace which costs thirty or forty thousand dollars to build lasts, at the most, twelve months! Then another has to be constructed in its place. Cold air is constantly blown against the outside of the furnaces and in some instances, where the walls are becoming thin, a “plaster” of cooling water-pipes is attached.

One of the peculiarities of glass is that it sinks to the bottom as it purifies. This bottom layer runs out of a “throat” in the bottom of the furnace, and into a refiner. The refiner, while intensely hot, is not as hot as the furnace proper, and here the glass rests for several hours. Temperature for “cooking” glass is about 2,600 degrees Fahrenheit.

From here, the glass gradually passes into a shallow trough extending outside the furnace. A revolving pot continually turns the cooling substance back into the furnace, keeping the material at a uniform temperature.

Now begins the actual manufacture of bottles. To describe the bottle-making machine would be nearly impossible. There are over 10,000 separate parts! The machine itself works almost with human intelligence. It is careful and gentle —handling delicate, half-cooled bottles so easily they aren’t even jarred—yet with strength enough to toss fifteen elephants around by their tails!

There are fifteen arms to each machine, and each arm contains a “thimble,” a blank mold, a finishing mold and a bottom plate. The blank mold stoops and sucks the molten glass into its steel mouth, just enough to fill it A “cut-off” whips by and slices the dangling, whispy slug free.

Revolving a short distance, the blank mold opens, and the stick of soft glass, looking like a home-made candle, is held in place by the thimble. The finishing mold now rises, and like an open hand, closes around the plastic material. As it does, compressed air hisses through the thimble and inflates the glass, blowing it out against the sides of the finishing mold.

In one complete revolution of the “spider” machine, the bottle is made. A chute is waiting, and as the arms swing by, a knock-out arm grasps the containers in turn and delivers them, via a belt conveyor, to the next step, the tempering “lehr.”

Strange as it seems, all the heat the bottles have been through is not enough. Were they allowed to cool naturally the way they are, they would break at the slightest touch of a human hand! The “lehr” is a machine which literally bathes each bottle in a stream of fire. A row slides down, rests over the flames an instant, and is whisked into the maw of a long, tunnel-like affair.

In soldierly fashion, the bottles now march slowly through the long length of the lehr, experiencing throughout varying degrees of heat. Finally, they emerge from the opposite end in a cool, bright room, where neatly uniformed girls lift them from the conveyor, inspect them, and pack them into corrugated cartons.

As you watch the thousands upon thousands of bottles parading from the finishing end of the many lehrs (there are thirty machines in this particular plant) you are forced to smile at your first idea of bottle-making. It would certainly take a lot of lung-power to blow up all of these bottles, as the old-timers did, once upon a time!