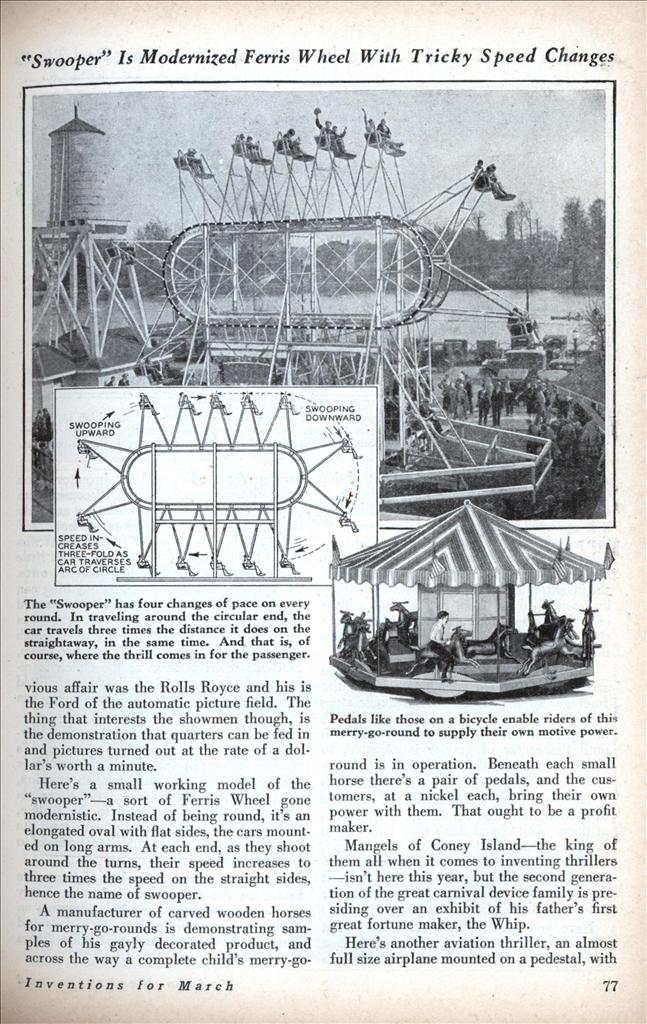 Over here there’s a hiss of compressed air escaping, and a blase showman from a small town carnival park, with a diamond stickpin in his tie, is getting the surprise of his life —and showing it too—fighting the buckin’est imitation airplane ever conceived. A knot of fellow carnival men stands around convulsed with laughter, but at the same time sizing up the thrills that trick flight training machine will give the general public.

Down the aisle there’s a “ping” and a white hole appears in the side of one of five small deer on an illuminated target on the wall. The demonstrator shoots each deer square in the heart with his “radio gun” as he calls it. Actually the machine is a picture projector, throwing the target picture on the wall, and each time he pulls the trigger a needle punches a hole in the film, and so registers the exact location of your aim. Five shots, five cents, pull a lever and the machine cuts off your piece of film and delivers it, with the holes punched to prove your marksmanship.

Around the corner a barker is getting ready to chop off a smiling lady’s head with a very realistic reproduction of a French guillotine. The big steel blade falls, apparently just behind the ears, the supposedly severed head, apparently wrapped in a red cloth, is transferred to a sword apparently lying across the arms of a chair, is turned, with appropriate patter, into a cabbage, then back to a head, and finally vanishes. Then, in more serious vein, the barker talks “turkey,” to the assembled showmen, for this is a business show at which next year’s attractions are bought and sold. The “nut,” he explains, meaning the operating cost, is so much a week, and then he goes on to estimate the possible profits.

Next door an automatic machine, which works something on the principle of the production line in an automobile factory, is turning out an endless stream of a frozen delicacy faster than an attendant can scoop it into ice cream cones and pass them around. Going to a showman’s show is fun, because everything is free. Attendants stand around with hands full of slugs, or real pennies, nickels and dimes, ready to drop them into any machine. If you pause in front of the penny arcade exhibits, artist’s models or Nights in Paris are flickering before your eyes as fast as a salesman can feed the pennies into the slot.

Stop and look at the baseball machine, which is the newest successor to the old “hit the nigger’s head” game, and a handful of balls are thrust on you. The baseball machine looks like an ordinary batter’s cage, with a painted batter and catcher, life size, at the end. You throw the ball to hit the bat, and if you hit it hard enough it swings all the way around and rings a bell.

Here’s another flying machine. The amusement world has gone gaga on the thrills of these flying trainers, and there are no less than four on the floor. This one was de- signed by a family of organ builders with a son who is a transport pilot. It is operated by organ parts, including bellows and a row of organ keys worked by a motor-driven cam. On the wall there’s a big clock dial with fifteen numbers, and every time you make an error and fail to correct it within six seconds the hand moves up a number. No pilot has ever yet “flown” the machine with a perfect score. One or two errors in a minute and a quarter is the best record yet made.

The machine actually succeeds in simulating bumpy air conditions, as bellows on opposite sides expand or contract. In fact the machine is designed primarily for actual training of pilots, and is being used so successfully by the designer that he’s been able to cut the price of training pilots down to $>85, since all the preliminaries can be given on the machine, and only a couple of hours in the air are required to finish the job and solo the student.

The U.S. army has also ordered a couple of the outfits, specially built and equipped for “blind flying.” The Pioneer Instrument company has designed the instruments, and fitted a hood over the cockpit to keep the pilot from seeing anything but his instrument board. In factory tests it is reported that not one pilot in twenty, regardless of what he thinks he knows about blind flying, can keep the machine in level flight and straight ahead. Because there is no centrifugal force strong enough to operate a normal turn and bank indicator, an entirely new instrument had to be invented, to work as a turn and bank indicator would work in the air.

Across the aisle a line of interested amusement park owners is passing through an automatic photographic gallery, which takes the customer’s picture for a quarter and three minutes later delivers the finished product in a neat round frame. If you don’t believe the results are fairly good take a look at what it did for me and draw your own conclusions.

The inventor, a young Canadian still under thirty, who already has a good part of the first million of his profits in sight, stands by and explains the works. Referring to an automatic picture machine, invented by a young Russian a few years ago, he explains the pre- vious affair was the Rolls Royce and his is the Ford of the automatic picture field. The thing that interests the showmen though, is the demonstration that quarters can be fed in and pictures turned out at the rate of a dollar’s worth a minute.

Here’s a small working model of the “swooper”—a sort of Ferris Wheel gone modernistic. Instead of being round, it’s an elongated oval with flat sides, the cars mounted on long arms. At each end, as they shoot around the turns, their speed increases to three times the speed on the straight sides, hence the name of swooper.

A manufacturer of carved wooden horses for merry-go-rounds is demonstrating samples of his gayly decorated product, and across the way a complete child’s merry-go- round is in operation. Beneath each small horse there’s a pair of pedals, and the customers, at a nickel each, bring their own power with them. That ought to be a profit maker.

Mangels of Coney Island—the king of them all when it comes to inventing thrillers —isn’t here this year, but the second generation of the great carnival device family is presiding over an exhibit of his father’s first great fortune maker, the Whip.

Here’s another aviation thriller, an almost full size airplane mounted on a pedestal, with a universal joint. This one came out of the Great Lakes Aircraft factory, and is the nearest of all to an actual plane. To begin with, it is operated entirely by the slip stream of the propeller, just like a regular ship. As it is not moving forward through the air you wouldn’t expect it to have lateral control, but the inventors solved that problem by leaving an opening in the front of the wing, with a clever chute leading back to the ailerons, so the wing scoops in air and delivers it across the ailerons at the wing tips.

And there’s a clever rack and pinion arrangement, with a hand crank below the fuselage, so that when the customer steps aboard, and the folding stairway is removed, the operator slides the ship back and forth until the center of gravity is adjusted, to allow for the pilot’s weight, until it is exactly over the joint on top of the pedestal.

There are midget golf greens all over the exhibition hall, and all kinds of variations of them. And if you don’t play golf maybe you like tennis. Here’s a sort of batting cage, with numbered holes in the backdrop. In front an automatic machine serves balls at the player, who attempts to lob them into the holes with the highest numbers.

Have you heard about the newest “flat ride” that made its appearance down east last summer? It proved such a success it’s now on the market, and the inventor is on hand to demonstrate. The thrill comes from putting the rider on the water, so anybody can get the feel of running a power boat. All you need is a small pond (the original was about 140 by 190 feet) and a supply of little three-passenger, four-cylinder motorboats. They are as near fool-proof as anything can be, and with a 3-h.p. engine develop a speed of about 7 miles an hour. The passenger has an auto steering wheel and a clutch, which throws the power on when it is pushed down, and cuts it off as soon as the clutch is released. Fourteen to twenty boats, each fitted with taxi meters to record the charge, can operate in one small pool with safety.

If you don’t like “flat rides”, as the showmen call them, try this one for a change. It’s a water toboggan that hauls the customer back to the top. No climbing, no exertion, you just sit still, slide down the chute, an attendant poles you around to the incline, and an endless chain takes you back to the top, and swings you around into position to go down again.

There’s a tremendous lot of inventive brains in the amusement industry. Every year sees new devices, and improvements on older ones, come out to lure the nickels and dimes at the Coney Islands and White Cities of the world.