Odd article explaining all of the tricks and techniques used by trainers to get their animals to perform in movies without using vocal commands. 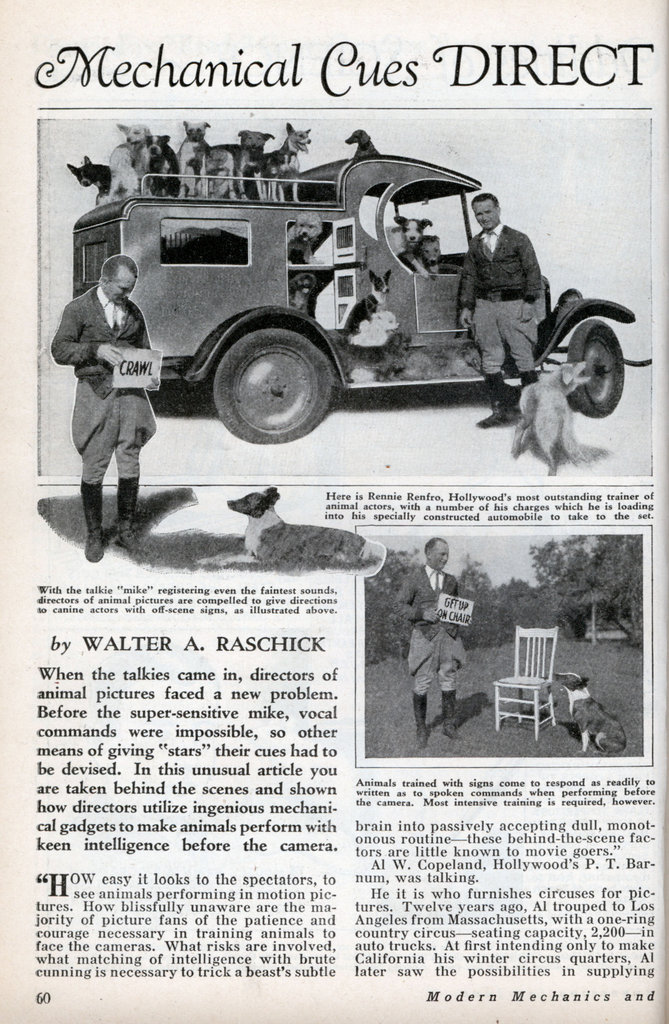 When the talkies came in, directors of animal pictures faced a new problem. Before the super-sensitive mike, vocal commands were impossible, so other means of giving “stars” their cues had to be devised. In this unusual article you are taken behind the scenes and shown how directors utilize ingenious mechanical gadgets to make animals perform with keen intelligence before the camera.

“HOW easy it looks to the spectators, to see animals performing in motion pictures. How blissfully unaware are the majority of picture fans of the patience and courage necessary in training animals to face the cameras. What risks are involved, what matching of intelligence with brute cunning is necessary to trick a beast’s subtle brain into passively accepting dull, monotonous routineâ€”these behind-the-scene factors are little known to movie goers.”

He it is who furnishes circuses for pictures. Twelve years ago, Al trouped to Los Angeles from Massachusetts, with a one-ring country circusâ€”seating capacity, 2,200â€”in auto trucks. At first intending only to make California his winter circus quarters, Al later saw the possibilities in supplying equipmentâ€” “from an ant to an elephant” (his slogan)â€”for pictures.

So he remained in Hollywood. Today he has five fully-equipped circuses, with a seating capacity of 12,000 for one of them alone!

“Since talkies came in,” Mr. Copeland explained, “training animals for picture work has been doubly hard. In the silent days, a trainer had his charges schooled to respond to vocal commands; now, since the microphone picks up all foreign sounds, signs must be used. When this mechanical revolution came, it suddenly became necessary for trainers to drill their skilled animals all over again to new methods.”

Painstaking efforts are required on the part of trainers in first breaking and drilling their charges. This alone takes weeks, sometimes months.

Occasionally directors put in last-minute calls for certain animals, stipulating that the beasts must be familiar with certain definite tricks. Such calls often make it obligatory for trainers to work all night putting their animals through a new routine, so that they will respond perfectly to their cues the next day.

Trainers Are Patient But Firm

Such emergency training quite naturally makes an animal irritable, and it is at such moments when trainers must be keenly on “edge.” The slightest slip often spells disaster. In handling any type of animal before the camera, the trainer must constantly exercise the most extreme firmness, for the moment he relaxes his vigilance, the animal senses it and there is havoc to pay.

Almost every trainer in the picture business swears by his ownâ€”and differentâ€” method of training. All of them aver that kindness and patience win in the long run. Some believe in rewarding their charges with sweetmeats; others declare that “bribery” is never conducive to best results.

Risks are run, however, even when animals are veteran actors. No matter how thoroughly trained, animals are apt to quake and tremble, run amuck at the slightest change in the routine.

During some night filming in Rain or Shine, Pansy, a lady elephant who had campaigned before the cameras since the early silent days, was sedately shimmying through her role when a newspaper cameraman trained his lens on her for a flash-light picture. “Boom” went the flash gun, and Pansy, in her flashlight-picture debut, became panic-stricken.

She trumpeted furiously, thundered through the open tent flaps and ran amuck toward Burbank’s residential district. Joe Cook, star of the picture, and trained since his boyhood in circus work, leaped upon a horse and galloped in pursuit. When he came abreast of Pansy, she recognized his horse, stopped in her tracks, turned abruptly, and walked meekly back to her tent.

That was a narrow escapeâ€”for Pansy as well as for Burbank’s citizenry, for circus animals at large usually finish their runaway jaunts at the sorry end of bullets.

Subterfuge is often necessary to induce an animal, no matter how intelligent or well trained, to do his stuff when something unusual crops up in his routine.

Spots, a pony born and bred in California, worked in Ruth Chatterton’s picture, Once A Lady. During his part of the action, Spots, was supposed to run through a fog.

The synthetic fog rolled in as per schedule, but Spots refused to budge.

The pony’s owner tried all his tricks, from pleas to threats. But it remained for a prop man to solve the problem by attaching a bunch of alfalfa to an improvised overhead cable carrier out of camera range, and Spots, being allowed one little nibble before the fodder was pulled down the carrier, ran through the fog as nimbly as a coed at a Junior Prom.

In They Had to See Paris, Minou, the black cat, was coaxed, to no avail, to walk along the window sill, until everyone on the set was beside himself. Finally, the expedient of daubing the sill with sardine oil was adopted and Minou complacently walked along the route scheduled for the camera.

Animal actors, trainers say, are not adept at concealing their real feelings before the camera. Take, for instance, the case of the St. Bernard dog in John Barrymore’s picture Moby Dick. The animal was to have appeared in the film, but for some reason known only to himself, he took a dislike to Barrymore.

This was doubly strange in view of the fact that Barrymore’s own pets include four dogs and eleven cats, and he prides himself upon being able to win almost any animal’s confidence and affection. But the St. Bernard hired to work in Moby Dick first balked openly and then went off in a corner and sulked, refusing to move.

John solved the problem by replacing the canine with Peter, his own gigantic St. Bernard. “One of the most intelligent actors in the picture,” said John later, in discussing the incidentâ€”and we don’t know to this day whether he was referring to the stubborn one or to Peter.

When the mercury rises too high for the animals’ comfort, they become drowsy and cannot be persuaded to take any interest in film proceedings; when the temperature cools off too much, they shiver and look for warm shelter.

In a dog act, especially, it is vitally necessary to keep the stage cool, as the minute the canines begin to feel warm they stick their tongues out at the camera and begin to pant, which means that the scene must be stopped until they cool off. Thus the problem of proper heating becomes of vast importance in pictures where animals are used.

Roosters are made to crow by being placed before a mirror. When they see the image of another bird in the glass, they ruffle up their feathers and crow lustily, ready for battle.

When the executives of the old Pathe company (now part of RKO-Pathe) first adopted chanticleer for their organization’s trade-mark, trainers had not yet found the mirror system of extracting a tune from a cock’s throat. Technicians finally hit upon the expedient of blindfolding the rooster and putting him into a box. Then, suddenly flashing on bright lights, they removed the blind and tossed the bird out of his box and directly toward the lights.

Never once did chanticleer fail to crow with vim and vigor, for he had been artfully deceived into believing that coming blindfolded out of a box into a flood of lights had been a transition from night to day.

Rennie Renfro, owner and trainer of more than 100 canines, works his dogs almost exclusively in Metro-Goldwyn-Mayer’s all-barkie pictures. Travesties of important pictures they have made include “Trader Airedale,” “The Big Dog House,” and “The Two Barks Brothers.”

What makes dog actors act? Kindness and hamburger for the most part, according to Jules White and Zion Myers, the clever young directors who created the idea and who have directed the series, developing it until today a dog comedy is actually easier to direct than one with human actors.

“As the first step toward training a dog,” says Renfro, “teach him to play with a ball, and when he has a liking for that, then start on some simple trick like ‘sitting up,’ using the ball and bits of hamburger as rewards. Some dogs will do more for something to eatâ€”some for a chance to play ball,” Rennie declares.

“The first idea is to build up an understanding with the dogâ€”for dogs can understand you when you tell them something, as soon as you have their confidence. To train a dog, a fellow has to know at least as much as the dog.”

To teach small animals to somersault, a special harness is made, to which is attached two straps, one fastened to a ring on a post about three feet off the ground, the other held by the trainer. At a signal, the animal leaps off the ground and the trainer simultaneously pulls the strap taut, so the animal automatically turns in the air. Once the animal masters the body turn precisely, the harness and straps can be dispensed with.

Every trainer of dogs knows that “mutts” are far easier to train and much more tractable than are pedigreed dogs. Also, the mongrel is cleverer by farâ€”possibly because thoroughbreds, raised more in luxury, have never had to sharpen their wits by hustling for themselves in emergencies. This “hustle” is bred through generations in the mutt. A smart dog is one who has an “edge” on the others in general intelligence which will enable him to master difficult routines in training.