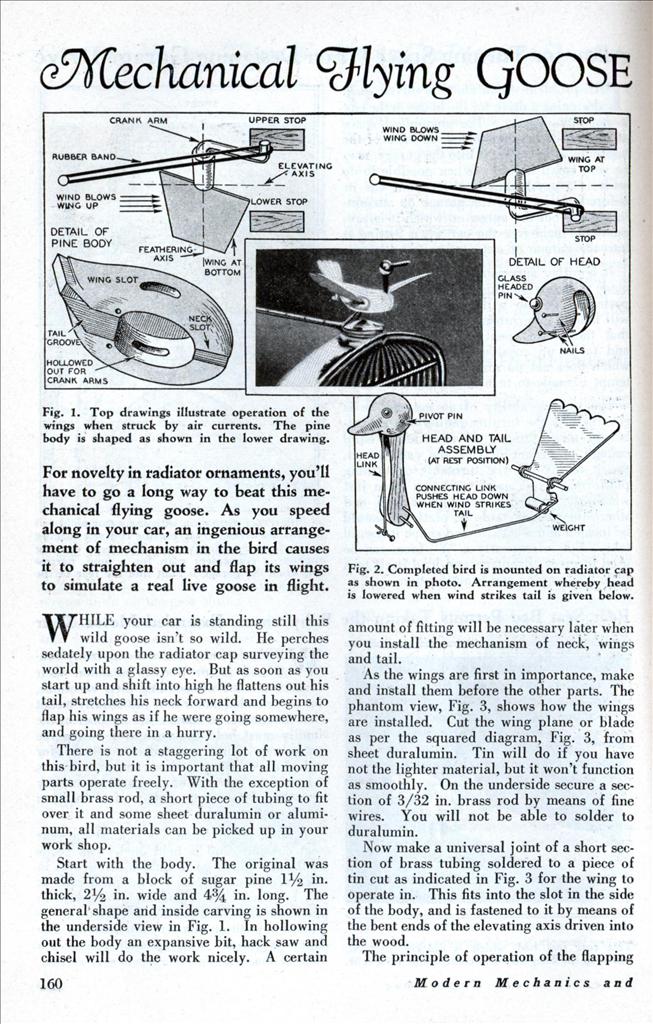 For novelty in radiator ornaments, you’ll have to go a long way to beat this mechanical flying goose. As you speed along in your car, an ingenious arrangement of mechanism in the bird causes it to straighten out and flap its wings to simulate a real live goose in flight.

WHILE your car is standing still this wild goose isn’t so wild. He perches sedately upon the radiator cap surveying the world with a glassy eye. But as soon as you start up and shift into high he flattens out his tail, stretches his neck forward and begins to flap his wings as if he were going somewhere, and going there in a hurry.

There is not a staggering lot of work on this bird, but it is important that all moving parts operate freely. With the exception of small brass rod, a short piece of tubing to fit over it and some sheet duralumin or aluminum, all materials can be picked up in your work shop.

Start with the body. The original was made from a block of sugar pine in. thick, 2-1/2 in. wide and 4-3/4 in. long. The general shape and inside carving is shown in the underside view in Fig. 1. In hollowing out the body an expansive bit, hack saw and chisel will do the work nicely. A certain amount of fitting will be necessary later when you install the mechanism of neck, wings and tail.

As the wings are first in importance, make and install them before the other parts. The phantom view, Fig. 3, shows how the wings are installed. Cut the wing plane or blade as per the squared diagram, Fig. 3, from sheet duralumin. Tin will do if you have not the lighter material, but it won’t function as smoothly. On the underside secure a section of 3/32 in. brass rod by means of fine wires. You will not be able to solder to duralumin.

Now make a universal joint of a short section of brass tubing soldered to a piece of tin cut as indicated in Fig. 3 for the wing to operate in. This fits into the slot in the side of the body, and is fastened to it by means of the bent ends of the elevating axis driven into the wood.

The principle of operation of the flapping wing is known as “feathering,” and is practically the same as the movements of a sculling oar used at the stern of a boat. This action is illustrated in Fig. 1. Note in the first position that the wing tip is down, but the leading edge is elevated. Thus the air current causes the wing tip to rise. When it reaches the top limit of the second position, or rather while approaching it, the crank arm inside the body is brought against a wood stop, which tilts the leading edge down, and thus the air current forces the wing tip down again. This flapping operation continues as long as there is a fair wind. The rubber band snaps the wing into proper position as soon as the crank-arm passes the center line.

It is necessary to have the brass rod, or crank-arm shaft, fit nicely in its tube bearing and also to have elevating axis work without much play. Tension of the rubber band will be determined by experiment, as will the location of the wood stops. Bind the rubber bands to the crank-pins with thread and apply model airplane cement also.

Tin will not do for the tail on account of its weight. So large an area must necessarily be above the axis that either duralumin or aluminum must be used. Even at that it must be counterbalanced with a good-sized piece of lead, for this weight must also keep the head erect when at rest, in spite of the fact that the latter, as well as the neck, is made of soft balsa. Added weight can be had by using a fairly heavy wire or brass rod for the connecting link, as illustrated in Fig. 2. It is necessary to swing this link low to clear the wing mechanism. Light piano wire is used for the link between head and body. This is a necessary feature, for otherwise the head would merely lop down in lifeless fashion when the neck is pushed forward. Loops in the piano wire are made by twisting two or three turns around a small nail driven into the workbench.

Use pins or long brads for the axes of head and neck, and be sure the holes are large enough for the parts to move freely. A neat counterbalance weight for the tail is made by rolling a cylindrical piece of lead in an extension of the former, as shown in the drawings. When air currents force the tail to a horizontal position this weight moves up into a recess of the body shown in Fig. 1. Set your goose on a standard of galvanized wire to clip around the radiator cap, and give it a try-out before painting. If the wings flap too high or too low, or both, make the necessary adjustment by using thicker wood stops. You may need to change the tension of the rubber bands for smoother action.

After tests are made, by all means give your goose the very best paint job you know how. Give all wood parts a white ground-coat, and sandpaper smoothly when dry. The bird should, of course, be taken apart for the painting. Next, with a comparatively dry brush—that is, without paint dripping from it—touch in the brown feathers until only the wing tips are left white. Also leave the breast white, as well as the underpart of the body, a portion of the neck and a spot on the side of the head, as shown in Fig. 3. Black, glass-headed pins cut off to about in. are used for eyes, and they certainly give this lively fowl a determined look.

With a first rate paint job this radiator ornament will cause much comment, and if your friends call it a wild goose chase, there is fascination in the fact that while you never really catch him, he never actually gets away from you.