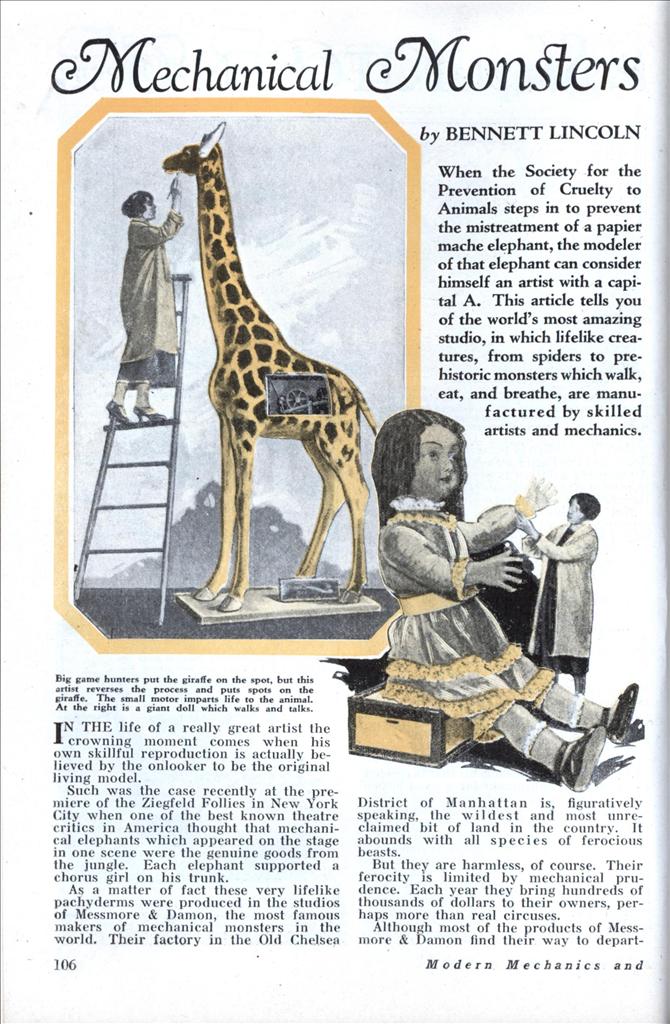 Mechanical Monsters that Live and Breathe

When the Society for the Prevention of Cruelty to Animals steps in to prevent the mistreatment of a papier mache elephant, the modeler of that elephant can consider himself an artist with a capital A. This article tells you of the world’s most amazing studio, in which lifelike creatures, from spiders to prehistoric monsters which walk, eat, and breathe, are manufactured by skilled artists and mechanics.

IN THE life of a really great artist the crowning moment comes when his own skillful reproduction is actually believed by the onlooker to be the original living model.

Such was the case recently at the premiere of the Ziegfeld Follies in New York City when one of the best known theatre critics in America thought that mechanical elephants which appeared on the stage in one scene were the genuine goods from the jungle. Each elephant supported a chorus girl on his trunk.

As a matter of fact these very lifelike pachyderms were produced in the studios of Messmore & Damon, the most famous makers of mechanical monsters in the world. Their factory in the Old Chelsea District of Manhattan is, figuratively speaking, the wildest and most unreclaimed bit of land in the country. It abounds with all species of ferocious beasts.

But they are harmless, of course. Their ferocity is limited by mechanical prudence. Each year they bring hundreds of thousands of dollars to their owners, perhaps more than real circuses.

Although most of the products of Mess-more & Damon find their way to department stores as spectacular window displays, requests pour in for exhibits for parades, freak museums, the Broadway stage, lectures and countless commercial enterprises.

A short time ago a customer placed his own peculiar problem before Joseph Damon, one of the partners. The wine brick business had just taken New York by storm and this inquirer owned a chain of establishments selling these concentrations. He wanted a display in the window which would capture the attention of the passing throngs.

Mechanized Advertising Models The wine brick man thought he wanted the figure of a man pouring himself a glass of the liquid, lifting it to his lips, and then licking his cheeks with satisfaction.

Mr. Damon advised against that. It wouldn’t look just right in prohibition times.

“What you want,” explained Mr. Damon, as he sketched his idea for the man on paper, “is a seal balancing one of your bricks on the tip of his beak. The seal will waddle his body and twirl the brick around. They’ll be watching for the seal to drop the brick. That’ll get ’em.”

The seal idea clicked. Reduced to a simple formula, the working secret of the Messmore & Damon models may be found in the use of clever motors and reduction gears, making possible slow and accurate motion. These go to form the “insides” of the monsters. Sometimes they are hidden in a box on which the figure is super-imposed.

Modeled by Artists Papier mache is used to construct the form of the beast or whatever model is desired. .First the animals are modeled in clay by artists, in which branch Mr. Damon is considered pre-eminent, and then they are cast in plaster. The finished figure is ultimately built up by stuffing the mould with layer upon layer of the wet paper, the substance known as papier mache.

Throughout the entire process there is strict co-ordination between artists and mechanics. There must be perfect synchronization in order to attain success.

George H. Messmore, who is the mechanical genius of the Messmore & Damon combination, cited their reproduction of the dinosaur, a creature which roamed the face of the earth some 50,000,000 years ago, as an example of the harmony which must be struck between artist and mechanic.

“The body of this restored mammal was made of rattan and was put together with springs so as to be flexible. We obtained our data for this restoration from the American Museum of Natural History, which was very much interested in our work.

“Inside the body there was a table which carried motors and speed reducers which operated the various parts. The legs of the table passed through the legs of the ‘dino.’ The head and neck were controlled by a heavy steel tubing working through a series of flexible shafts.

Switchboard Controls Motion “Every motion was controlled from one switchboard. If desired, the motions could have been reversed. A man concealed within a thatched hut ran the switchboard, controlling the dinosaur’s movements.- “The artist had to maintain a fidelity for his original specimen in designing the form of the dinosaur and it was the mechanic’s job to see to it that the pulleys and weights brought about various contortions which were true to type and not ridiculous and unreal.

“This model was so constructed that the eyes, head, neck, hips, belly, sides and tail moved with weird realism. This fellow is often taken on the road for department store attractions or even for some carnival, and a lecturer goes along.

Dinosaur Brings Down House “The lecturer brings the house down because of the antics he is able to command the dinosaur to perform. It will take a handkerchief from the man’s hand and place it in his pocket. It will roll its eyes and make all kinds of sounds and movements with its mouth, while its body is heaving as if in the act of breathing. Sometimes it suddenly snaps its tail and lashes those nearby, causing quite a hilari- ous furore as the spectators are frightened.

“The lecturer pretends not to notice these surprise acts. They are executed by the man secreted in the hut at the switchboard.

“The building of the dinosaur was a big undertaking. It was ten feet high and fifty feet long. The covering was made of heavy rubberized quilting. The head and feet were made of specially prepared papier mache. It weighed over 4,000 pounds and cost $35,000 to build.

Monster Goes on Tour “This winter this synthetic dinosaur is going to start out on a theatrical tour, doing forty weeks on the Fanchon-Marco circuit. It will actually walk down stage, pick up a beautiful girl between its jaws, lift her to a height of fifteen feet, let her down and bow gracefully to the audience.

“In addition to the elephants which we now have playing in the Follies, we have just completed two more which are going to appear in the new Schwab & Mandel musical comedy on Broadway. Each one of these elephants, as well as being worked by motors and gears, must be supplemented by a man who is secreted in each one and who operates various strings, causing them to sway and dance in unison, as well as wag their ears to the time of the music.

A $30,000 Model “While that dinosaur took eighteen months to complete, we had another longtime job on our hands when we set about constructing a lifelike mammoth. It took a year and $30,000 to make this.

“Its skin was made of the hide of over 400 Mongolian goats. The sixteen electric motors which were inside it, made it breathe, roll its eyes, wiggle the ears, move its trunk and toss its head. The dinosaur and the mammoth, plus a model caveman thrown in for atmosphere, make quite an exhibition.

“A short time ago we installed these models in a Newark department store and 400,000 people visited that establishment during the two weeks the animals were there. This one set brings close to $150, 000 a year in rental from department stores or others desiring it.

Models Made for Talkies “As is apparent, we turn out everything from a spider to an elephant in the way of realistic models. Even the talkies come to us for their make-believe animals and other exhibits. We have just finished a huge saxophone for Warner Brothers-Vita-phone. Musicians will emerge from various valves and keys of this gigantic instrument. It. is 21 feet high.”

One of the biggest jobs Messmore & Damon have ever tackled was the exhibition of models depicting the history of American transportation. There were ten miniature exhibits which traced the history of transportation from the days of the Indian drag up to the day of the first airplane.

The figures were one-third life-size scale, the ground and water effects were of specially – prepared cloth, and the coaches, steamboats, locomotives, automobiles and airplanes were perfect working models. About 200 artists and mechanics were employed 011 this undertaking which required $150,000 to complete.

“One of our monster displays got us into considerable difficulty not so long ago, just because someone misunderstood,” Mr. Damon told me.

“The Chrysler Motor Company commissioned us to build one of our papier mache elephants for them. They •wanted to use it in connection with an advertising campaign. This elephant could do everything but eat peanuts.

“He was installed on top of an automobile and was taken around the city. Finally at one stop, agents of the Society for the Prevention of Cruelty to Animals went up to the driver of the car and told him that several women had complained about the ill treatment and danger to which the elephant was exposed.

S.P.C.A. Makes a Call “No sooner had we explained our way out of that situation than the same society was called in when three of our mechanical giraffes had been left lying out in the snow.”

An odd coincidence brought Mr. Mess-more and Mr. Damon together. They first met at the time of the Hudson-Fulton Ex- hibition in New York in 1909, since which time they have been in business together.

Mr. Messmore had been doing sundry jobs about the theatre and finally rising to head man of the backstage mechanics at the Metropolitan Opera House. Mr. Damon divided his time between days at a butcher shop and nights at an art school. Mr. Damon finally became one of the staff in charge of the Hudson-Fulton pageant. They decided to pool their talents.

Next year they are planning to enter a number of floats at the celebration of the Washington Bicentennial. Their exhibits will portray various signal events in the life of the first President.