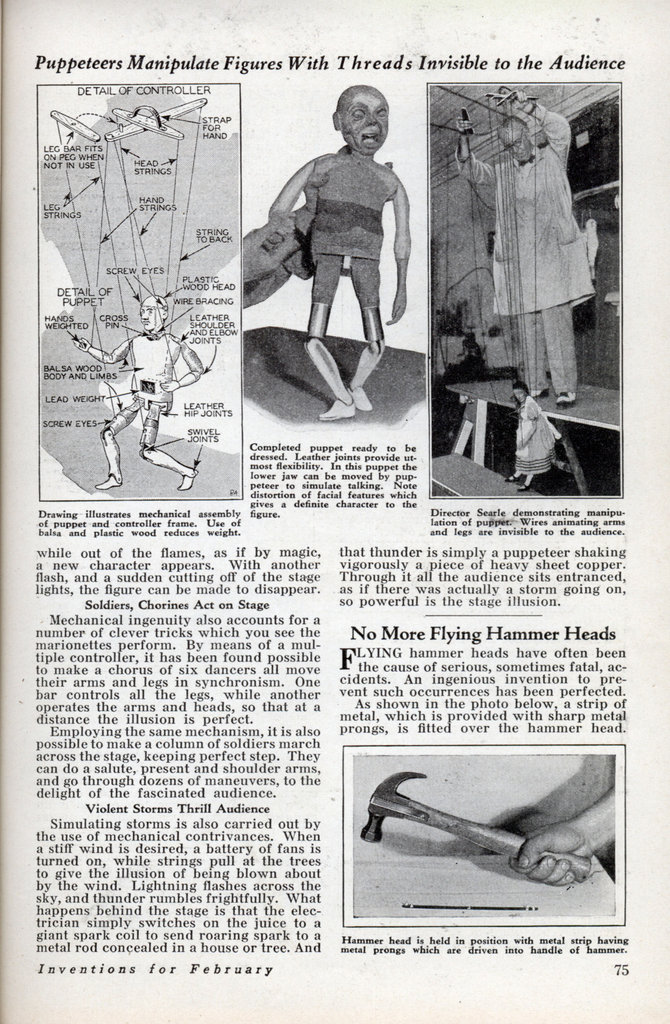 Still, they possess every vestige and appearance of being perfectly normal and human in every detail. What I mean is that if a Broadway producer suddenly found himself with a flock of players on his hands who would be willing to work for nothing, he would think he was in a nut factory.

Paradoxical as it may seem, I happen to be just that type of lucky producer. And I guess those impresarios who stage hundred thousand-dollar flops sometimes wish they could employ actors, on the same wage scale as mine.

My company is made up of mechanical, wooden-headed actors, skilled men and women, called puppeteers, who control the marionettes, and a staff of mechanical experts whose jobs are to devise the puppet stunts. The director, head man and general factotum is Charles E. Searle, the marionette wizard. Thousands of persons have seen the puppets go through their realistic roles on the stage, and hundreds of thousands will have seen the make-believe players in “The Rose and the Ring” before their career of two years runs out, yet few will have penetrated behind the illusion to inquire by what mechanical ingenuity these actors are entitled to represent humans with a resemblance that fills one with awe.

I am going to tell you how this is done. You will follow me through the preliminary stages at my studio at 54 West 9th St. and through my workshop where the marionette departs for its stage career.

Early last summer Director Searle, himself a master of 30 different mechanical trades besides being a painter and a sculptor, and I had a conference. We decided that “The Rose and the Ring” was the most suitable production for us. Previously we had put on “Rip Van Winkle” and the story of Christopher Columbus, as well as many other fantasies.

Preliminaries of the Puppet Show

We then set about studying the plot and interpreting the characters, as well as visualizing the scenery and stage properties.

The first thing I did was to draw sketches of the characters as I understood them from Thackeray’s lines. In the making of a marionette’s facial expressions there is one predominant factor. If your actor is to be a villain, he must look like the .most villainous creature that ever existed.

If your figure is to represent a beautiful lady, it must appear so extravagantly beautiful that it will take your breath away. When it comes to the contours and emotions of the face, stress is laid on exaggeration.

These rough sketches which I make in the preliminary stage are made to the size of each puppet, working on a 1/3d. scale. Everything appearing on the stage during a marionette production is done on that basis. Each figure is two feet high.

This arrangement maintains an illusion similar to that prevailing on a motion picture screen. We regard all humans as being six feet tall, hence the two-foot scale. Our actors appear lifelike in their environment just as the movie players do in theirs.

With all the charts and drawings completed, including designations as to what each puppet’s wearing apparel is to be, we withdraw to the workshop for the various mechanical processes.

The first step comes in the modeling of the heads. Sometimes these are actually carved in wood, executed by skillful carvers. But most of them are made from plastic wood or papier mache.

Plastic wood, which is a combination of wood pulp, cellulose and ether, has become the most efficient substance for the making of marionette faces. It comes in putty form and is therefore very plastic and easily shaped by the fingers of the artist and artisan as well.

After the figure desired is moulded in clay, a plaster mould is made, It is into this mould that the plastic wood or the papier mache is pressed. The rather crude product is then retouched by the artist and may be equipped with mustache, whiskers or any other feature necessary to the completion of the character. The eyes are usually the same as those used in the making of ordinary dolls.

When it comes to the bodies, some distinction must be made between characters who are supposed to be corpulent and those which are slim. Our latest material for this section is the featherweight balsa wood. It is very light and at the same time quite malleable, so to speak. The arms and legs are linked to the torso with fibre, a flexible, material which is a sort of paper composition.

Then right in the same workshop we have designers and dressmakers who outfit the marionettes in the costumes appropriate to their roles. This phase of the work is carried out with the same devotion to scale and detail as the actual creation of the puppet.

Now we come to the final stage of these mechanical actors. Thread-like wires must be fastened onto the various parts of their faces and bodies, which are to appear animated during the performance. A puppet appears to speak, make facial expressions, walk, sit and recline during a play. Some even grin, smoke or roll their eyes. For the most part the wires which motivate these robot Thespians are invisible to the audience, giving the sensation of a weird reality.

To explain more lucidly just how the strings are worked, I will take you backstage, by a stretch of the imagination, and there you will see how the puppet play goes on.

From the rear you behold a platform just behind the miniature stage on which the mechanical players are performing. Then there is another platform just above the same stage, the two platforms being separated by possibly two feet of space. These platforms are unseen by the audience and just a couple of feet over the intervening space where the marionettes are performing.

A half dozen people, called puppeteers, stand on these platforms and manipulate the little figures, whose vocal parts they assume. Sometimes one person may speak the parts of four or five puppets. An astute training in ventriloquism, with an aim at realism rather than deception, is a considerable asset here.

You see each figure is suspended by about a dozen strings, all of which converge upon a small wooden frame resembling a toy airplane body. With the palm of the hand gripping the main beam of these frames, free play is allowed the fingers to move over and give the proper jerk to the string which will produce a certain gesture or movement.

Certain strings manipulate arms, others govern legs, the head and other members. There are strings which control stage accessories, such as swords and animals’ tails.

In the case of “The Rose and the Ring”, the charmed ring brings beauty to its possessor and when the Countess loses it, a string causes her beautiful face to disappear and in its place, behold! an ugly one.

Marionettes are not a new phenomenon by any means. They have appeared in this country for the past 75 years. Traces of them may be found in ancient civilization and historians have been able to find out.

much about antiquity from the characteristics of their puppets.

period in English history they were the only actors allowed to perform on the stage. Their story always bore a moral punch.

My latest production cost me $10,000. It is the result of more than twelve years of experimentation with puppets, having first started with neighborhood bazaar exhibitions. A marionette’s life is usually of two years’ duration, which is almost equal to its theatrical counterpart in real life, except where outstanding stars of the Barrymore ilk are concerned.

Marionettes have a number of distinctive advantages over the legitimate stage. Where the latter theatre is limited to mere presentations of reality, the puppet theatre permits excursions into the realm of the fantastic. Giants, dwarfs, gnomes, angels, grotesque monstersâ€”all are enabled to appear on the stage with amazing lifelike-ness. As mentioned a few paragraphs back, ugly old women are transformed into instantly lovely young girls, and vice versa. Powerful magicians also do their stuff.

These apparent miracles are made possible by the application of science and mechanics. A wire connected to a pile of powder will set off a miniature explosion, while out of the flames, as if by magic, a new character appears. With another flash, and a sudden cutting off of the stage lights, the figure can be made to disappear.

Mechanical ingenuity also accounts for a number of clever tricks which you see the marionettes perform. By means of a multiple controller, it has been found possible to make a chorus of six dancers all move their arms and legs in synchronism. One bar controls all the legs, while another operates the arms and heads, so that at a distance the illusion is perfect.

Employing the same mechanism, it is also possible to make a column of soldiers march across the stage, keeping perfect step. They can do a salute, present and shoulder arms, and go through dozens of maneuvers, to the delight of the fascinated audience.

Simulating storms is also carried out by the use of mechanical contrivances. When a stiff wind is desired, a battery of fans is turned on, while strings pull at the trees to give the illusion of being blown about by the wind. Lightning flashes across the sky, and thunder rumbles frightfully. What happens behind the stage is that the electrician simply switches on the juice to a giant spark coil to send roaring spark to a metal rod concealed in a house or tree. And that thunder is simply a puppeteer shaking vigorously a piece of heavy sheet copper. Through it all the audience sits entranced, as if there was actually a storm going on, so powerful is the stage illusion.