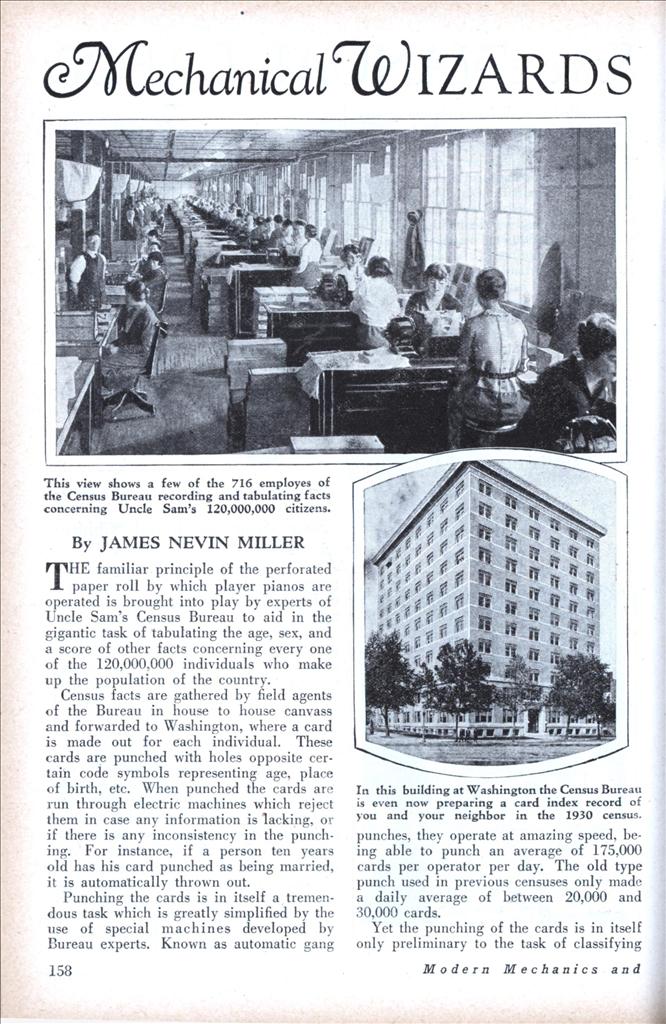 Mechanical WIZARDS of the CENSUS BUREAU

THE familiar principle of the perforated paper roll by which player pianos are operated is brought into play by experts of Uncle Sam’s Census Bureau to aid in the gigantic task of tabulating the age, sex, and a score of other facts concerning every one of the 120,000,000 individuals who make up the population of the country.

Census facts are gathered by field agents of the Bureau in house to house canvass and forwarded to Washington, where a card is made out for each individual. These cards are punched with holes opposite certain code symbols representing age, place of birth, etc. When punched the cards are run through electric machines which reject them in case any information is lacking, or if there is any inconsistency in the punching. For instance, if a person ten years old has his card punched as being married, it is automatically thrown out.

Punching the cards is in itself a tremendous task which is greatly simplified by the use of special machines developed by Bureau experts. Known as automatic gang punches, they operate at amazing speed, being able to punch an average of 175,000 cards per operator per day. The old type punch used in previous censuses only made a daily average of between 20,000 and 30,000 cards.

Yet the punching of the cards is in itself only preliminary to the task of classifying the information they contain. Here it is that the cards pass through a machine which has been appropriately called the “mechanical wizard,” for it does just about everything but sleep and eat. Officially termed the automatic tabulating machine, or unit tabulator, it can be operated at a speed of 400 cards per minute and will record 60 different facts. The punched holes in the cards control the action of the machine in very much the same way that the above mentioned player roll operates a piano, except that in the case of the tabulator the machine is electrical and contacts are made through the punched holes, rather than admitting air through them.

In the base of the machine are counters which tabulate the various kinds of information. When all the cards representing a certain district have passed through the machine, the totals are automatically printed on tally sheets.