Science And Mechanics
Issue: Feb, 1936
Posted in: Entertainment, How to
Tags: magic
2 Comments on Mechanics of Magic (Feb, 1936) 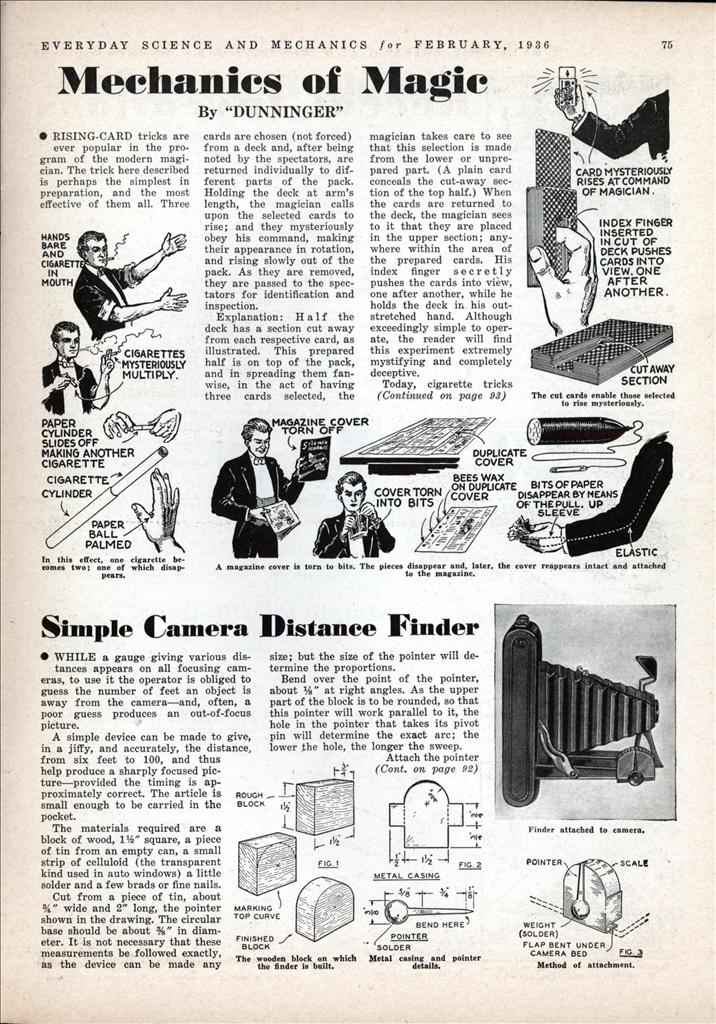 • RISING-CARD tricks are ever popular ill the program of the modern magician. The trick here described is perhaps the simplest in preparation, and the most effective of them all. Three cards are chosen (not forced) from a deck and, after being noted by the spectators, are returned individually to different parts of the pack. Holding the deck at arm’s length, the magician calls upon the selected cards to rise; and they mysteriously obey his command, making their appearance in rotation, and rising slowly out of the pack. As they are removed, they are passed to the spectators for identification and inspection.

Explanation: Half the deck has a section cut away from each respective card, as illustrated. This prepared half is on top of the pack, and in spreading them fan-wise, in the act of having three cards selected, the magician takes care to see that this selection is made from the lower or unprepared part. (A plain card conceals the cut-away section of the top half.) When the cards are returned to the deck, the magician sees to it that they are placed in the upper section; anywhere within the area of the prepared cards. His index finger secretly pushes the cards into view, one after another, while he holds the deck in his outstretched hand. Although exceedingly simple to operate, the reader will find this experiment extremely mystifying and completely deceptive.

Today, cigarette tricks are all the rage. Dexterous manipulators of cigarettes are featured throughout the country, and no magician’s repertoire, either professional or amateur, seems complete without at least one trick where smokes are involved. The trick herein explained has all the earmarks of one which requires dexterous manipulation and long practise; but, in reality, it is simple to execute, and requires very little preparation.

The wizard steps forth, leisurely smoking a cigarette. His arms are bare to the elbows, and his hands are unmistakably empty. Slowly he removes the cigarette from his mouth and, while he holds it between his fingertips, it mysteriously multiplies to two. Puffing away for a few moments at each respective cigarette, the wizard again places one between his lips, and continues to smoke, while he closes his hands slowly around the second cigarette. His fingers are opened a few moments later, and the cigarette is found to have vanished as mysteriously as it was produced.

Explanation: The second cigarette is really a mere paper cylinder, which fits loosely over the genuine cigarette. The magician therefore needs but to remove the cylinder to perform the act of multiplication; and, by blowing through it some smoke which he had retained in his mouth from the genuine cigarette, he gives the necessary appearance of realism.

Placing the genuine cigarette back in his mouth he proceeds to “disappear” the second cigarette which, in reality, simply consists of rolling the paper cylinder into a small ball easily secreted in the fleshy pocket between his thumb and first finger, while showing his hand empty.

For the third effect, of this month, the magician passes a copy of Everyday Science and Mechanics for examination. After it is found to be unprepared and is returned to him, he deliberately tears off the cover and places the remains of the magazine face down upon a newspaper, lying flat upon the top of a table. He now proceeds to tear the cover into many small pieces, which he rolls between his finger tips. Upon slowly opening his fingers, the scraps of paper are found to have mysteriously vanished. Picking up the magazine, not only is the cover found to have been restored mysteriously, but it has also mystically returned to its affixed position upon the magazine.

Explanation: Two copies of the same issue of the magazine are necessary to perform this trick. From one, the cover is removed beforehand and a section of newspaper is glued to the back of the cover. This is, secretly, laid face downward upon an unprepared newspaper and, at a short distance, it cannot be observed by the spectators. The edge of this duplicate cover is daubed with touches of beeswax. In performing this illusion, the magician actually tears the cover from the copy of the magazine which he displayed and passed for inspection. In the act of placing the rest of the magazine upon the table, he takes care to place it directly on top of the concealed duplicate cover and, by bearing down upon the edge, causes the duplicate to adhere to the magazine. All that now remains to be done is to tear the original cover-sheet visibly into small pieces, and load them into the ever-indispensible “pull,” which carries them up the sleeve and out of sight. (A “pull” is a small metal container, attached to a strong elastic band, which is concealed inside the performer’s sleeve, as illustrated.)