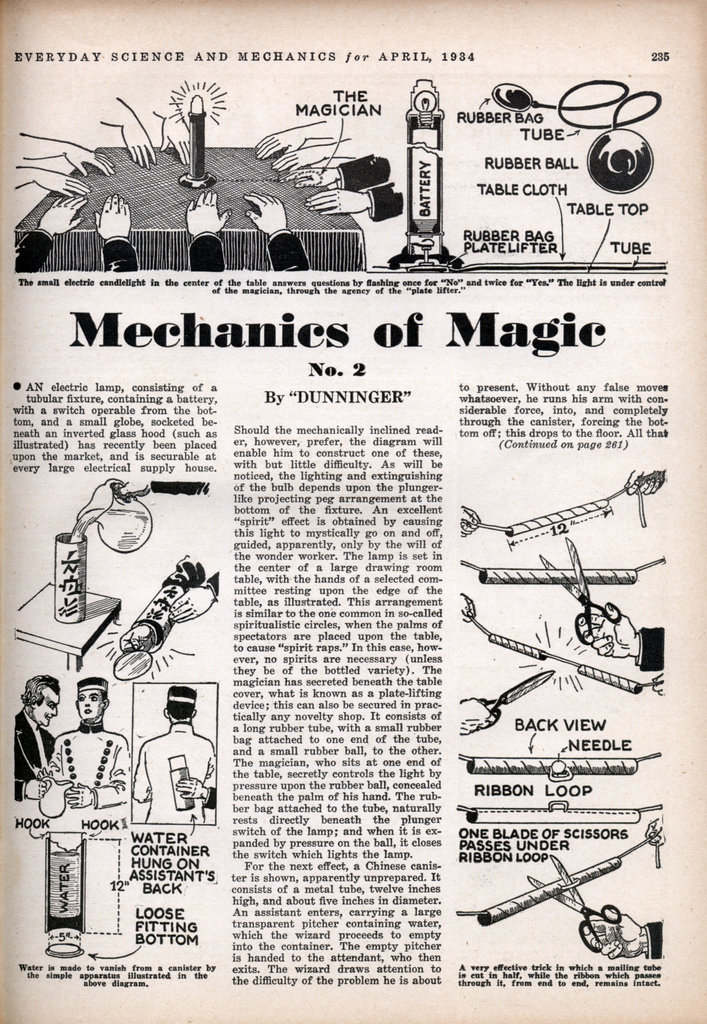 AN electric lamp, consisting of a tubular fixture, containing a battery, with a switch operable from the bottom, and a small globe, socketed beneath an inverted glass hood (such as illustrated) has recently been placed upon the market, and is securable at every large electrical supply house.

Should the mechanically inclined reader, however, prefer, the diagram will enable him to construct one of these, with but little difficulty. As will be noticed, the lighting and extinguishing of the bulb depends upon the plungerlike projecting peg arrangement at the bottom of the fixture. An excellent “spirit” effect is obtained by causing this light to mystically go on and off, guided, apparently, only by the will of the wonder worker. The lamp is set in the center of a large drawing room table, with the hands of a selected committee resting upon the edge of the table, as illustrated. This arrangement is similar to the one common in so-called spiritualistic circles, when the palms of spectators are placed upon the table, to cause “spirit raps.” In this case, however, no spirits are necessary (unless they be of the bottled variety). The magician has secreted beneath the table cover, what is known as a plate-lifting device; this can also be secured in practically any novelty shop. It consists of a long rubber tube, with a small rubber bag attached to one end of the tube, and a small rubber ball, to the other. The magician, who sits at one end of the table, secretly controls the light by pressure upon the rubber ball, concealed beneath the palm of his hand. The rubber bag attached to the tube, naturally rests directly beneath the plunger switch of the lamp; and when it is expanded by pressure on the ball, it closes the switch which lights the lamp.

For the next effect, a Chinese canister is shown, apparently unprepared. It consists of a metal tube, twelve inches high, and about five inches in diameter. An assistant enters, carrying a large transparent pitcher containing water, which the wizard proceeds to empty into the container. The empty pitcher is handed to the attendant, who then exits. The wizard draws attention to the difficulty of the problem he is about to present. Without any false move whatsoever, he runs his arm with considerable force, into, and completely through the canister, forcing the bottom off; this drops to the floor. All that now remains is an empty tube, which is passed for inspection at once. The liquid contents have completely vanished.

Explanation: An inner metal lining is secretly contained inside the canister. It is this inner section which really receives and retains the water. Several hooks are soldered to the upper edge of this inner lining, and project about half an inch over the outer edge of the cylinder. When presenting the illusion, and after emptying the water into the canister, the pitcher is returned to the assistant. During this action, the cylinder is for a moment hidden from the audience’s view, behind the attendant’s back. It is during this brief interval that the magician finds the opportunity of hooking the inner cylinder to the attendant’s coat. With a small amount of practice, this move can be accomplished with perfection, and so quickly that the act cannot possibly be discovered. The attendant, in leaving the stage, naturally walks off, being careful that the load upon his back is not discovered. This leaves the empty cylinder, with a removable bottom, in the magician’s hands. With a bit of showmanship, he then concludes the experiment.

In the Enchanted Tape trick, a length of tape (about a yard and a half long, and an inch wide), a pair of scissors, a needle and a 12-inch mailing tube are all the paraphernalia necessary to perform one of the most startling and mystifying of magical tricks. The tape running through the tube is exhibited, and two spectators are requested to stand at opposite ends, each holding one of the ends of the tape. Using a pair of scissors, the magician deliberately cuts the mailing tube and its contents in half. Strange as it may seem, the tube, divided in half, remains upon the tape, which is still intact. The pieces of tubing are removed, and the tape passed for immediate inspection.

Explanation: Before presenting the trick, a small piece had secretly been cut out of the back of the tube. The tape is threaded, as in the diagram, to enable a loop of the tape to be pulled through the hole, and project upon the outside of the tube. The piece cut out is put back in place and held there by a needle, which is quite invisible at a short distance. In the act of cutting the tube in half, one blade of the scissors is secretly passed under the loop, enabling the magician to cut the tube, without injury to the tape. The needle naturally drops to the floor, unnoticed.