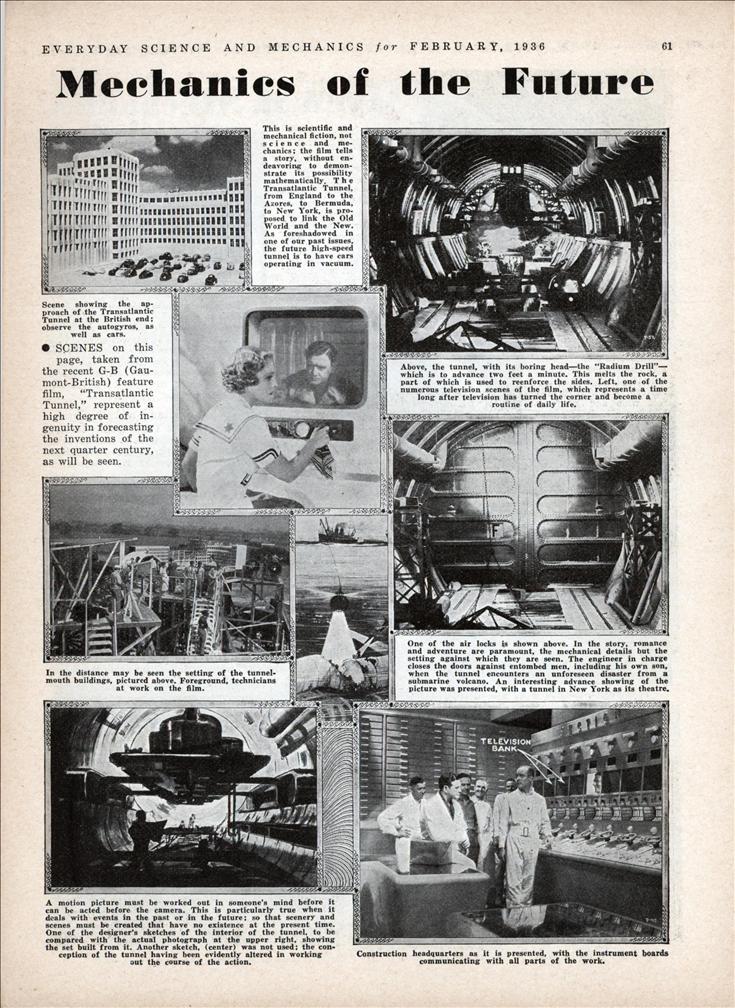 Mechanics of the Future

• SCENES on this page, taken from the recent G-B (Gaumont-British) feature film, “Transatlantic Tunnel,” represent a high degree of ingenuity in forecasting the inventions of the next quarter century, as will be seen.

This is scientific and mechanical fiction, not science and mechanics; the film tells a story, without endeavoring to demonstrate its possibility mathematically. The Transatlantic Tunnel, from England to the Azores, to Bermuda, to New York, is proposed to link the Old World and the New. As foreshadowed in one of our past issues, the future high-speed tunnel is to have cars operating in vacuum.

Scene showing the approach of the Transatlantic Tunnel at the British end: observe the autogyros, as well as cars.

Above, the tunnel, with its boring head—the “Radium Drill”— which is to advance two feet a minute. This melts the rock, a part of which is used to reenforce the sides. Left, one of the numerous television scenes of the film, which represents a time long after television has turned the corner and become a routine of daily life.

One of the air locks is shown above. In the story, romance and adventure are paramount, the mechanical details but the setting against which they are seen. The engineer in charge closes the doors against entombed men, including his own son, when the tunnel encounters an unforeseen disaster from a submarine volcano. An interesting advance showing of the picture was presented, with a tunnel in New York as its theatre.

In the distance may be seen the setting of the tunnel-mouth buildings, pictured above. Foreground, technicians at work on the film.

A motion picture must be worked out in someone’s mind before it can be acted before the camera. This is particularly true when it deals with events in the past or in the future; so that scenery and scenes must be created that have no existence at the present time. One of the designer’s sketches of the interior of the tunnel, to be compared with the actual photograph at the upper right, showing the set built from it. Another sketch, (center) was not used; the conception of the tunnel having been evidently altered in working out the course of the action.

Construction headquarters as it is presented, with the instrument boards communicating with all parts of the work.