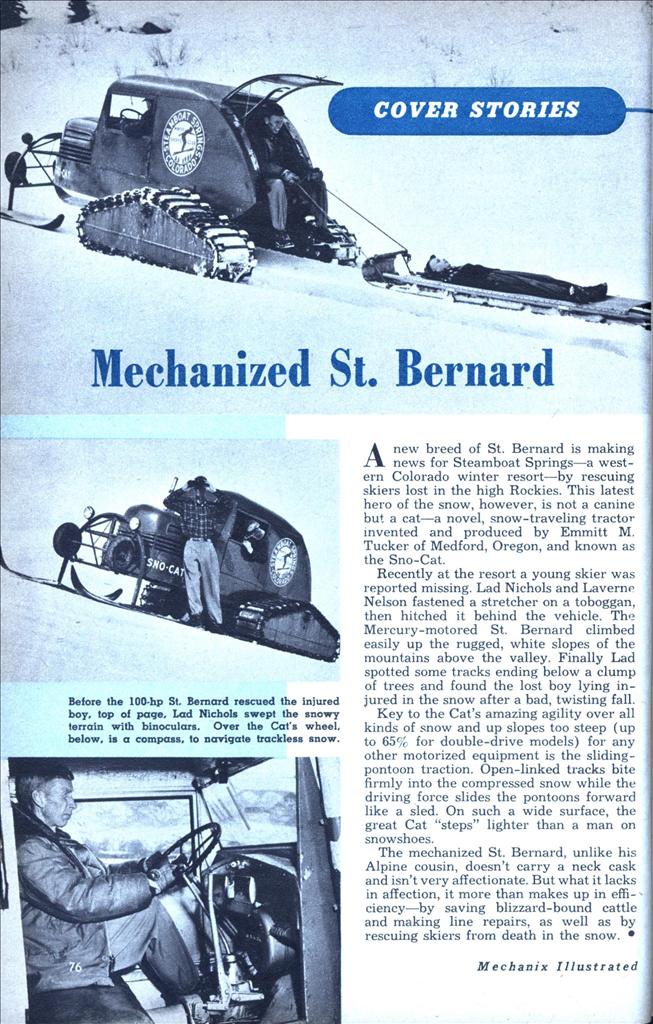 A new breed of St. Bernard is making news for Steamboat Springs—a western Colorado winter resort—by rescuing skiers lost in the high Rockies. This latest hero of the snow, however, is not a canine but a cat—a novel, snow-traveling tractor invented and produced by Emmitt M. Tucker of Medford, Oregon, and known as the Sno-Cat.

Recently at the resort a young skier was reported missing. Lad Nichols and Laverne Nelson fastened a stretcher on a toboggan, then hitched it behind the vehicle. The Mercury-motored St. Bernard climbed easily up the rugged, white slopes of the mountains above the valley. Finally Lad spotted some tracks ending below a clump of trees and found the lost boy lying injured in the snow after a bad, twisting fall.

Key to the Cat’s amazing agility over all kinds of snow and up slopes too steep (up to 65% for double-drive models) for any other motorized equipment is the sliding-pontoon traction. Open-linked tracks bite firmly into the compressed snow while the driving force slides the pontoons forward like a sled. On such a wide surface, the great Cat “steps” lighter than a man on snowshoes.

The mechanized St. Bernard, unlike his Alpine cousin, doesn’t carry a neck cask and isn’t very affectionate. But what it lacks in affection, it more than makes up in efficiency—by saving blizzard-bound cattle and making line repairs, as well as by rescuing skiers from death in the snow.