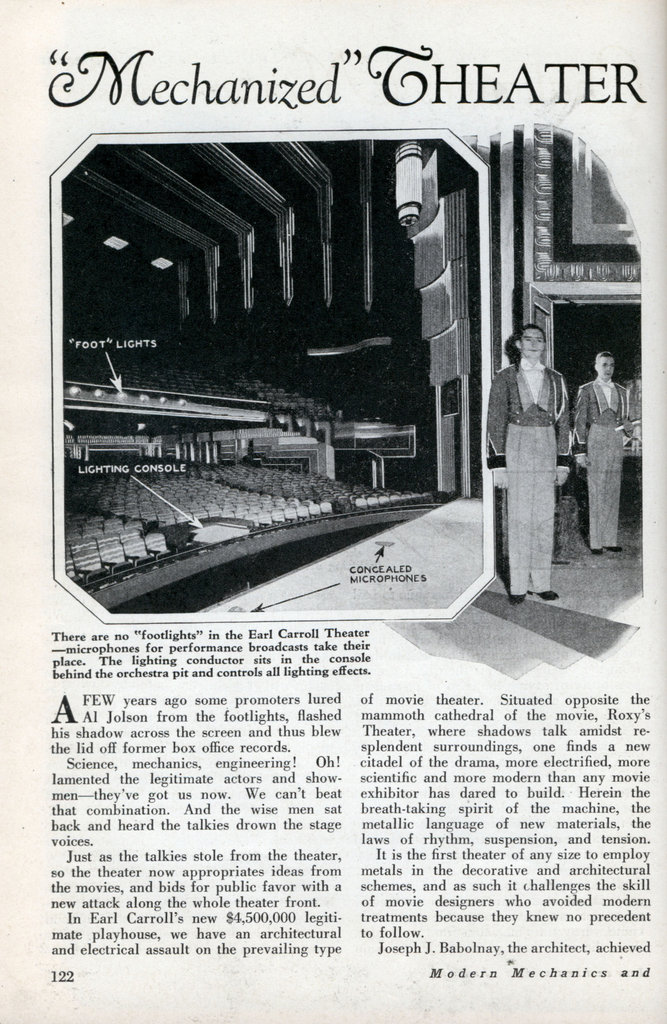 Taking a hint from the movies, the modern theater is “going mechanical” with a vengeance. In the new Earl Carroll theater all the resources of inventive ingenuity are employed for the comfort of patrons and the production of spectacular stage effects impossible in an ordinary theater.

A FEW years ago some promoters lured Al Jolson from the footlights, flashed his shadow across the screen and thus blew the lid off former box office records.

Science, mechanics, engineering! Oh! lamented the legitimate actors and showmenâ€”they’ve got us now. We can’t beat that combination. And the wise men sat back and heard the talkies drown the stage voices.

Just as the talkies stole from the theater, so the theater now appropriates ideas from the movies, and bids for public favor with a new attack along the whole theater front.

In Earl Carroll’s new $4,500,000 legitimate playhouse, we have an architectural and electrical assault on the prevailing type of movie theater. Situated opposite the mammoth cathedral of the movie, Roxy’s Theater, where shadows talk amidst resplendent surroundings, one finds a new citadel of the drama, more electrified, more scientific and more modern than any movie exhibitor has dared to build. Herein the breath-taking spirit of the machine, the metallic language of new materials, the laws of rhythm, suspension, and tension. It is the first theater of any size to employ metals in the decorative and architectural schemes, and as such it challenges the skill of movie designers who avoided modern treatments because they knew no precedent to follow.

Although this theater can be turned into daylight, all lighting fixtures are invisible. Artificial light diffuses through the auditorium as evenly as sunshine. One hardly knows from which direction it comes. Were the walls hard or glossy, the illusion of depth would fail to be distinguished; hence, they are covered with bluish-black velvet. To the spectator, the black walls appear to be boundless space, marked off only by the satin-lustered metal forms.

Magnetic controls make it possible to effect a complete “blackout” instantaneously. Heretofore, theater blackouts were ineffective because the reddish glow lingered on the lamp filaments.

One manâ€”the lighting conductor â€”controls all the illumination. Not one switch may be found backstage. The lighting director, an engineer, commands the stage from a place of importance, directly behind the orchestra leader. He wears a full dress suit. In his hands he holds the reins to every light in the theater. His commands are obeyed instantly and accurately.

In the proscenium arch, illumination comes from cold-cathode neon tubes, with a special dimming control. Heretofore it has never been possible to dim such lights. In all there are 50 incandescent lighting circuits, 34 on the stage and 16 in the house, in addition to the large number of arc circuits. The auditorium lights have four colorsâ€”red, blue, green and whiteâ€”the most elaborate combination in any theater.

All the lights have a value of 367,000 watts, of which 231,000 are on the stage and 136,000 in the house proper. The stage arc lighting circuits must be added to this. Notwithstanding this stupendous amount of current, the control system requires a maximum of only 200 watts. The control board does not handle large currents directly, but through the medium of electron tubes and a reactor system.

The lighting director, and at times, the stage manager, occupy a small cabin, 6 by 4 feet, from which the manager may telephone directions to all parts of the theater.

The lighting director may turn any one of 50 knobs, connected to as many circuits. By the use of master switches, he controls all the circuits with one motion of the hand, or he can split the control into major and minor divisions, depending upon color, location and function.

Performers in this theater may dance to the very edge of the stageâ€”there are no footlights. Conventional lighting arrangements are taboo. In front of the balcony facia, fourteen 2,000- watt lamps throw illumination on the stage. Directly above the balcony, in the theater arc, are eight powerful lamps.

The decorative lighting is reflected from the polished metal panels and from channels carved in the ceiling.

Behind each seat the spectator finds a program lighter. By pressing a button, he lights a candle-power bulb and reads his program without disturbing other patrons.

Backstage of the Earl Carroll Theater one finds many conventional practices reversed. At the very entrance, for instance, the usual gruff-spoken doorman is absent, and in his place are handsome and jaunty young women. If you bring flowers to your favorite actress, the door women see that they are stored in a refrigerator, and handed to the proper person after the performance, in perfect condition.

The dressing rooms have individual tables, chromium plated and with black glass tops. Performers have private telephones from which they may communicate with anybody in the house, or call outside.

Soft-voiced loud speakers in each dressing room make it possible for the performers to know exactly what takes place on the stage.

The call boy, another fixture of the stage, passes. Actors in this theater are paged by a system of loud speakers.

The old system of intermission bells prevalent in legitimate theaters, gives way here to another loud speaker. From behind the stage one hears the stage manager’s voice in the lobby saying: “Ladies and gentlemen, I am just sending the orchestra into the pit; the curtain rises in two minutes.”

A powder spraying machine saves time and labor for actors who need “makeup”. One merely turns a switch and the apparatus sprays any desired part of the body.

The stage itself is enormous, even for a 3,000-seat theater. It measures 100 feet from the floor to the gridiron, 100 feet from wall to wall; the proscenium opening is 46 feet. The 150 drops are lowered by the latest counterweight apparatus. Motors are located in the rigging loft.

Below the stage proper is a vast trap room, 40 by 100 feet, and 19 feet deep. Two lifts rise from the trap room floor, the orchestra lift and the stage lift, which can rise fully ten feet above the stage floor. The floor of the lift can be rolled on and off, so that it is possible to build one set while the other is being played on the stage. Between acts, the lift descends into the trap room; the old set is rolled off, and the new one rolled on. Thus the complete change of scenery requires little more than one minute.

Any known mechanical equipment can be installed on this stage, from the underwater ballet, to a spring-board for elephants and an ice-skating rink for dancers.