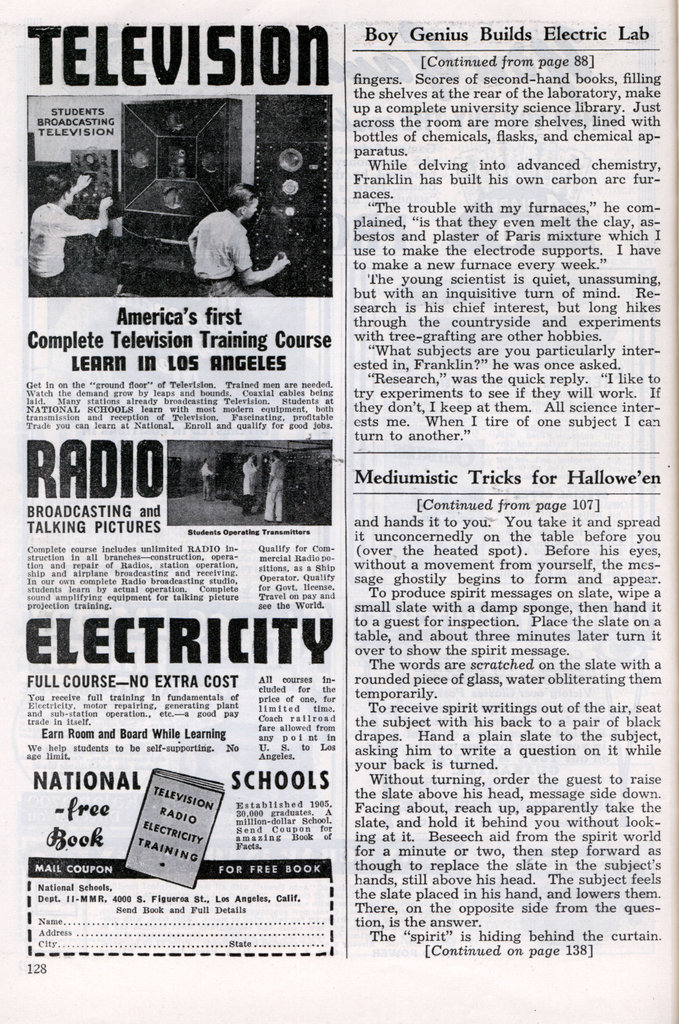 FOR new Hallowe’en thrills, put on a mediumistic party with turban-bedecked medium, darkened room, spirit writing, tables floating in the air, and all the other tricks which fake spirit mediums use so successfully. The mere suggestion, on your invitations, that all weak-hearted persons should stay at home will insure a crowd.

Drape a small room in the approved manner, placing a table and two chairs in the center, then assemble your own spirit-medium clothes. Messages from the spirit world enter this room via a simple but deceiving chemical trick. Call for one guest at a time, seating him opposite you at the table, then request that he write his name on the lower half of a sheet of paper. Roll up this paper, insert in an empty mason jar at your elbow, then intone:

“In a moment we shall have a message for you from the spirit world.”

You pick up the jar shortly, and examine the paper through the glass. Mysterious writing is gradually forming. You remove the paper and hand it to your guest. “You will be wealthy,” says the message. “Obey the medium in all things and you will never go wrong.” The message may be anything.

The secret: Get a bottle of slightly diluted copper sulphate at the drug store; also a bottle of ammonia and a pad of white paper. Using the copper sulphate for ink, write twenty or more messages on separate pieces of paper. As the liquid dries, it vanishes. The jar is filled with ammonia, allowed to stand a few moments, then emptied. What ammonia still remains in the form of fumes is sufficient to turn the writing dark, when the copper sulphate is exposed to it.

Another simple message trick, which is widely used, is the heat treatment. Use a glass-topped table for this, and have a sheet of tin or aluminum underneath, to keep it from being cracked. Fasten an electric iron to the under side, and adjust it to its lowest heating point. Run the wires down the table leg and under the rug. With cardboard or plywood, build a false bottom under the table to keep the iron from being seen. An assistant can turn the iron on a few minutes before it is needed or you can place a switch under the rug.

Write with dilute sulphuric acid this time. The guest writes his name, tears off the sheet and hands it to you. You take it and spread it unconcernedly on the table before you (over the heated spot). Before his eyes, without a movement from yourself, the message ghostily begins to form and appear.

To produce spirit messages on slate, wipe a small slate with a damp sponge, then hand it to a guest for inspection. Place the slate on a table, and about three minutes later turn it over to show the spirit message.

The words are scratched on the slate with a rounded piece of glass, water obliterating them temporarily.

To receive spirit writings out of the air, seat the subject ‘with his back to a pair of black drapes. Hand a plain slate to the subject, asking him to write a question on it while your back is turned.

Without turning, order the guest to raise the slate above his head, message side down. Facing about, reach up, apparently take the slate, and hold it behind you without looking at it. Beseech aid from the spirit world for a minute or two, then step forward as though to replace the slate in the subject’s hands, still above his head. The subject feels the slate placed in his hand, and lowers them. There, on the opposite side from the question, is the answer.

The “spirit” is hiding behind the curtain.

When the subject raises the slate the first time, a hand reaches through the folds of the curtain, bearing a plain slate. The medium grabs this slate, and the “spirit” grabs the one held by the guest. He glances at the question, quickly scrawls an answer on the other side, and pushes the slate out through the curtain again. Another exchange completes the trick.

No “seance” is complete without a table-lifting demonstration.

Seat your friends across from you around a small, light table, and order them to rest their hands lightly on the top of the table as you are doing.

Sticks, thrust up your sleeves, are slid under the table edge to act as perfect levers in lifting and carrying the table about!

The common trick of joining hands is simple. Have the subject sit opposite you, and spread his hands on the table with the first and middle fingers of each hand, stroke the index fingers of the subject’s hands, in an absolutely dark room.

After a moment, slip one hand away and, by spreading the fingers of the other hand, continue the motion, without breaking the rhythm. Gradually stop the rubbing, then pick up a paper horn previously placed on the table for the spirits, and whisper the message. Reverse the rubbing operation to get your hands back into position again.