Sadly, it doesn’t seem that Mr. Bonson’s work ever became very popular. A quick Google search on his name only comes up with his wife’s 2011 obituary and an endorsement for his 1974 attempt at a seat on the Eugene city council. 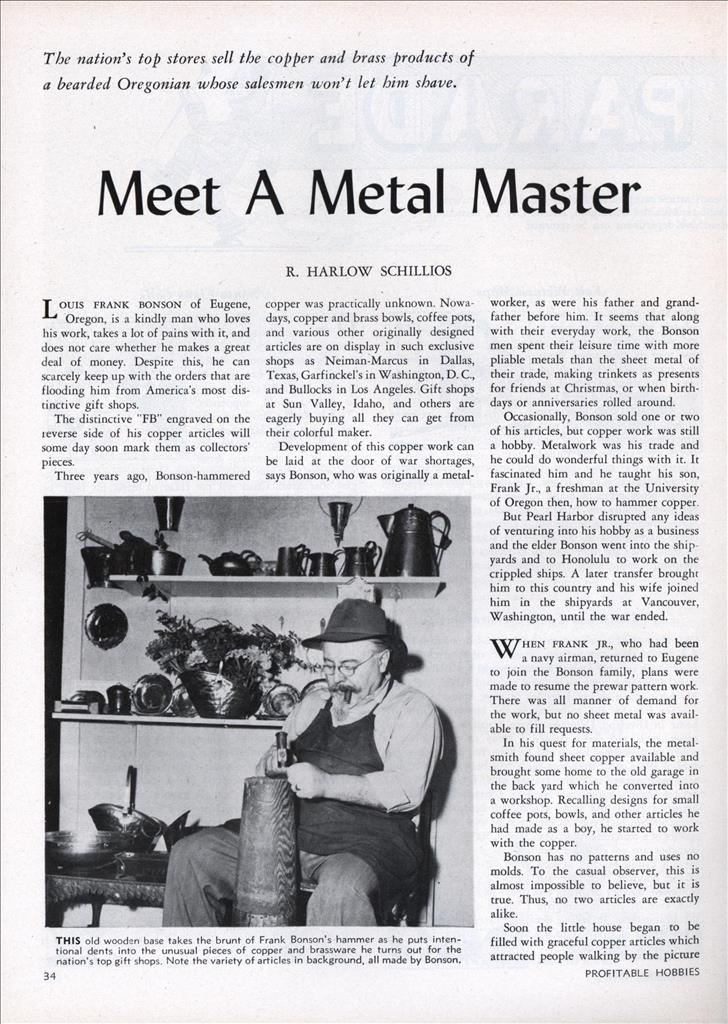 The nation’s top stores sell the copper and brass products of a bearded Oregonian whose salesmen won’t let him shave.

Louis Frank Bonson of Eugene, Oregon, is a kindly man who loves his work, takes a lot of pains with it, and does not care whether he makes a great deal of money. Despite this, he can scarcely keep up with the orders that are flooding him from America’s most distinctive gift shops.

The distinctive “FB” engraved on the reverse side of his copper articles will some day soon mark them as collectors’ pieces.

Three years ago, Bonson-hammered copper was practically unknown. Nowadays, copper and brass bowls, coffee pots, and various other originally designed articles are on display in such exclusive shops as Neiman-Marcus in Dallas, Texas, Garfinckel’s in Washington, D. C., and Bullocks in Los Angeles. Gift shops at Sun Valley, Idaho, and others are eagerly buying all they can get from their colorful maker.

Development of this copper work can be laid at the door of war shortages, says Bonson, who was originally a metal- worker, as were his father and grandfather before him. It seems that along with their everyday work, the Bonson men spent their leisure time with more pliable metals than the sheet metal of their trade, making trinkets as presents for friends at Christmas, or when birthdays or anniversaries rolled around.

Occasionally, Bonson sold one or two of his articles, but copper work was still a hobby. Metalwork was his trade and he could do wonderful things with it. It fascinated him and he taught his son, Frank Jr., a freshman at the University of Oregon then, how to hammer copper.

But Pearl Harbor disrupted any ideas of venturing into his hobby as a business and the elder Bonson went into the shipyards and to Honolulu to work on the crippled ships. A later transfer brought him to this country and his wife joined him in the shipyards at Vancouver, Washington, until the war ended.

When Frank jr., who had been a navy airman, returned to Eugene to join the Bonson family, plans were made to resume the prewar pattern work. There was all manner of demand for the work, but no sheet metal was available to fill requests.

In his quest for materials, the metal-smith found sheet copper available and brought some home to the old garage in the back yard which he converted into a workshop. Recalling designs for small coffee pots, bowls, and other articles he had made as a boy, he started to work with the copper.

Bonson has no patterns and uses no molds. To the casual observer, this is almost impossible to believe, but it is true. Thus, no two articles are exactly alike.

Soon the little house began to be filled with graceful copper articles which attracted people walking by the picture window in Bonson’s living room.

Eventually the fame of his work reached beyond Eugene, and the D. K. Shuttleworths, representatives of gift shops up and down the west coast, stopped in to see him. That really started his business rolling into the nation’s gift shops. Since then, more than 10,000 articles of hammered copper and brass have been made to order.

Large, flat, copper bowls edged with brass are particularly popular now. The reorders on these have been so numerous that Bonson has had to make a concession about patterns. Usually a design is created, the article made and it remains unique because it is never quite the same. Now, on a tiny slip of paper, the coppersmith records the sizes the copper must be cut in order to make the finished 10-inch, 12-inch, or 14-inch bowls. .

Among the more stunning of Bonson’s new designs are brass-bound copper plant holders, small-size coal scuttles in both copper and brass used as flower holders, what Bonson refers to as a “gaboon”—a two-foot-high jardiniere of copper with brass rings and other ornamentation, which is especially suitable for large flower arrangements, and oversized coffee pots which are ideal for outdoor barbecue pits.

Bonson also does special order work for persons who have some particular idea in mind.

Business has flourished until he has another aim in opening his little shop in Eugene. Ten per cent of all the gross sales he makes will go to the Eugene children’s hospital school.

Interest in his work has attracted students who are bent on learning the metalwork. Bonson doesn’t know how the plan will work out yet, but the students are avid about the classes and learn by doing in his tiny shop.

With his son, Frank Jr., returning to the University of Oregon, the elder Bonson has been left to turn out the hammered copper by himself. Visitors are apt to find him hammering away on the brass-bound copper bowls, ash trays, old-fashioned copper dippers, or candle snuffers (which sell for only $1), or any one of the dozens of articles he is so adept at making.

“Behind bonson’s success in this hobby which mushroomed into a profitable business, lie a few fundamentals which a beginner might well remember: “First, make something that is useful; then, secondly, make it decorative,” advises Bonson.

Today, Bonson’s collection of tools is simple: a few hammers, snips, an old oak pounding block, and a few sandbags. He also has a small device somewhat resembling a meat grinder clamped to his workbench. With this, he crimps a rim on such objects as kettles and pots. The edge to be crimped is inserted between two overlapping wheels, and as he turns the crank on this homemade gadget, a lip forms. Beneath this lip a wire is inserted and the lip closed over the wire to form a well-rounded edge for any article.

While Bonson is capable of rapidly snipping out a piece of metal and making something useful and pleasing to the eye in a comparatively short time, he prefers to study his article first.

He sketches the object on paper. His freehand drawings are done without instruments, but the idea is there in pencilled lines. Next he cuts cardboard patterns in the size the finished project will be. By now he knows how much metal is required, and out come the tin snips.

‘Take a hint from Bonson: customers like the “old effect,” and it’s achieved in wielding the hammer and by using the simple tools of yesteryear. The pliant metal responds to an imaginative tap by the hammer and no two pieces can be identical, though they may be similar.

Copper and brass shavings are swept into a pile under the main bench; sheets of metal gleam against the walls awaiting cutting; and in the midst of it all, Bonson, behind an interesting beard, pounds out the work in an effort to keep abreast of orders.

That beard is worthy of note since it has become a trade-mark Bonson cannot be without. It seems that when the Shuttleworths called on the coppersmith he was distinctively bearded in keeping with demands made of all males during the Oregon Trail Pageant held in Eugene every four years. Salesmen took pictures of Bonson around to the shops they called upon with this work. Shop owners and buyers became familiar with Bonson as the man with the twinkling eyes and bushy beard who had a flair for doing unique copper work.

When salesmen called again and found Bonson had shaved his familiar whiskers from his round face they were not only perplexed, but horrified. They had promised to introduce Bonson to several shop owners and it would never do to appear with a beardless version of Bonson. Nothing would do but that the rotund coppersmith should let the beard return in its fullness.

The beard returned, his buyers and customers were enchanted, not only with his work, but with the man. “And I’ve been working my head off for them ever since,” sighs Bonson.