Mechanix Illustrated
Issue: May, 1956
Posted in: Animals For Profit, Taxidermy
4 Comments on MEET Kathryn Apelt – THE ARMADILLO GAL (May, 1956) 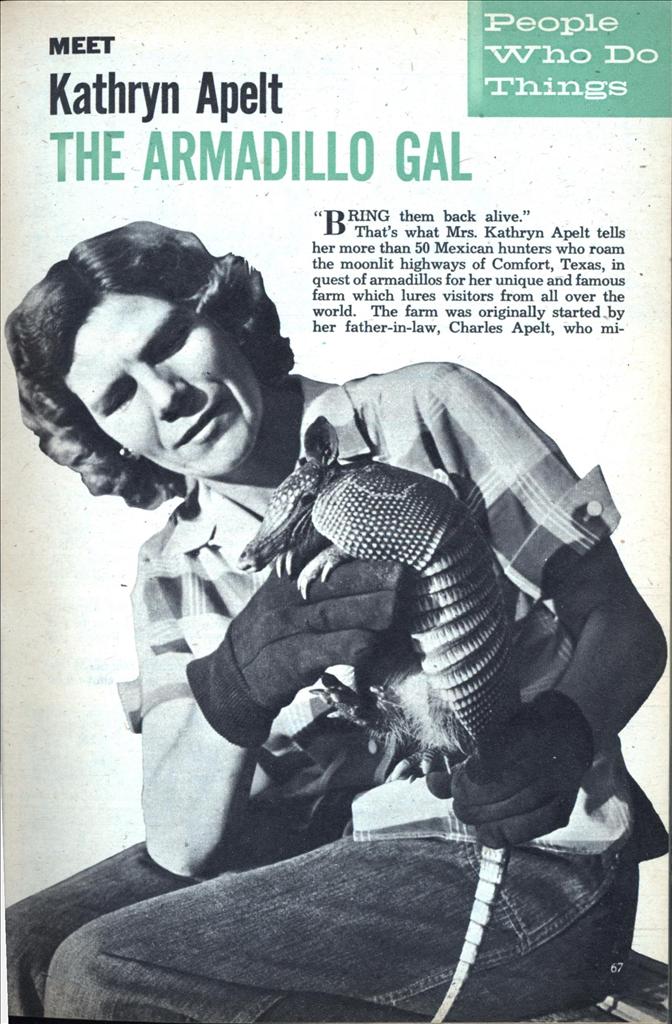 “BRING them back alive.”

That’s what Mrs. Kathryn Apelt tells her more than 50 Mexican hunters who roam the moonlit highways of Comfort, Texas, in quest of armadillos for her unique and famous farm which lures visitors from all over the world. The farm was originally started by her father-in-law, Charles Apelt, who migrated from Germany. Kathryn took it over when he died. Today she not only runs the place but makes artistic baskets and lamp shades from the shells of the strange little armor-plated beasts. She also ships them live to all parts of the world.

Armadillo hunters use trained dogs to catch their quarry for the ranch. But snaring them isn’t as easy as it sounds.

The powerful claws and stubby legs of the animal enables him to burrow with great rapidity, going deeper and deeper as the pursuer digs in his wake. Often they must be struck a stunning blow before they can be brought back to the farm.

The armadillo—which is the diminutive for “armed” in Spanish—is found all the way from Terra Del Fuego, the southernmost tip of South America, to the interior of Texas. But the species common to Central and South America is not as good a specimen for the making of baskets as those found in the hill country of the Lone Star State. The Texas armadillo has a heavier armor and a much longer tail than the armadillo of other parts.

The armadillo is one of the few mammals with bony plates. The oddest feature of this 20-inch long creature whose armored shoulder and hip shield is connected by nine movable bands, is the fact that every litter of offspring is al- ways four in number and always of one sex—either four males or four females.

As a pet the armadillo is shy and retiring and much more good-natured than the average domesticated animal. Eating everything and anything, the ‘dillo particularly likes grain, eggs and vegetables in captivity. On the open range he eats insects or flesh.

On the farm the animals are placed in pens. These pens must be kept warm —but not too warm—and never below freezing. Here they remain until they are ready to be skinned and made into ornamental lamp shades and baskets. •