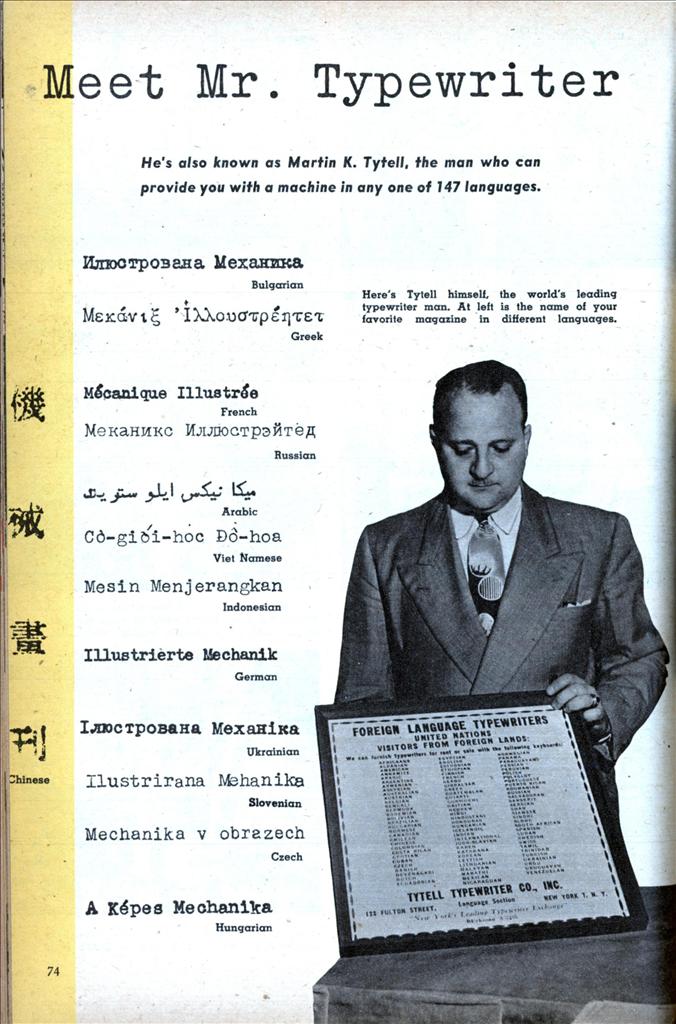 He’s also known as Martin K. Tytell. the man who can provide you with a machine in any one of 147 languages.

AT least once a month, New York postal authorities get a letter addressed to Mr. Typewriter, New York. But they stopped consulting their directories long ago—the letters now go automatically to Martin K. Tytell. As sole owner of the Tytell Typewriter Company, he rents, buys and sells typewriters but his specialty is making a typewriter do what its manufacturers never thought it could do.

In the past decade alone Tytell has converted more than 10,000 standard keyboard typewriters into machines that can be used for 147 different languages. He is probably the only mechanic in the world who can boast of shaking hands with college professors, ambassadors, Arabian shieks, bishops and generals in one day.

Shortly after Tytell got into the business, he was paid a visit by Nazi Ambassador Franz von Papen. The monocled German spoke English and at least half a dozen other languages fluently. “The guy wanted me to fix him a typewriter that could do correspondence in German, Italian, Spanish, French and English,” Tytell recalls. “But he said he was leaving the country immediately and was in a great rush. I had the machine ready for him the same day. A few weeks later we got the news about Pearl Harbor.”

Since then such jobs have become merely routine for typewriter Wizard Tytell. Only a few months ago Professor J. D. Edwards, of Columbia University’s East Asia Institute, came to Tytell with a special problem.

The professor could speak more languages than you could count on both hands and wanted to know if Tytell could get him a typewriter that could be used for half as many. Tytell took the professor’s own standard American typewriter and the very next day gave it back to him with what Tytell calls an international keyboard —one that can be used for writing in 14 different tongues.

And talking about jobs, Tytell claims he is the only Gl who got the right job classification in the Army during World War II. They had him fixing and repairing typewriters. But when they found out what he could really do to a keyboard, they put him in civilian clothes and for nearly half a year assigned him to top-secret projects with the OSS. He redesigned and rebuilt standard typewriters that were parachuted to underground fighters all over Europe. Many of these were used to turn out secret correspondence and psychological warfare leaflets in 17 languages. “Now I can tell you,” Tytell discloses, “that every time there was about to be a new invasion, I knew where to look for it by the kind of typewriter I was asked to make up.”

Today, Tytell has the closest thing to a monopoly in providing Arabic and Persian typewriters for commercial firms and government agencies with dealings in that part of the world. And now he is practically the sole provider of Hebrew typewriters for emissaries of the new Israeli Republic. Tytell also has built the only two Korean typewriters in this country. Like some of the Chinese and Japanese typewriters he has built, they are intricate contraptions that can place Oriental characters in their traditional vertical reading places. One of them is at Yale University. “But I don’t think anyone up there knows how to use it yet,” Tytell admits.

Tytell can boast of having at least one typewriter with his label in every country in the world. Many times he never sees his customers, since he gets orders by mail from every corner of the globe.

But once in a while when Tytell does see his customers, they are a source of embarrassment to him. The last time this happened a small army of FBI men surrounded the entrance to Tytell’s shop and lined the two flights of stairs leading to his office. They were the advance bodyguards for a prince from Saudi Arabia. All decked out in his desert-style uniform and jewelled dagger, he came to Tytell for an Arabic typewriter. When the excitement was over, Tytell had a tough job explaining to his neighbors.

On the other hand, it’s the ordinary working American who provides Tytell with some of his most amusing experiences. There was the time a middle-aged man came in and asked for a typewriter with nothing but question marks on the keyboard. He wanted them to come out above and below the line and in different sizes. “I did the job for him,” Tytell says, “but I could never find out what he wanted it for.”

Probably the most interesting part of Tytell’s work is that many of his customers come in without knowing how to speak a word of English. “Then we carry on our transactions in sign language,” Tytell says. “I can show them samples from more than 2,000,000 type faces that took me nearly 20 years to collect.

“But once a Catholic priest came in. He couldn’t speak English so he tried me in Polish. I tried him in German. Then he tried me in Russian. We couldn’t get together. Just as I was about to take him to my type files, he asked me if I could speak Hebrew. It turned out that priest spoke perfect Hebrew.”

Tytell takes a keen interest in the problems of disabled veterans and physically handicapped people. Together with Prof. August Dvorak, of the University of Washington, one of the world’s greatest authorities on time studies, motion analysis and aptitude testing, Tytell has designed his famous typewriter for one-armed persons.

Right now Tytell is busy putting the final business touches to a dream that has held his attention ever since he’s been in the business. He calls it “The Typewriter of Tomorrow.”

It took him eight years of laborious research to develop. Although most of its parts are in the process of being patented and are still secret, Tytell is willing to divulge two revolutionary features. One is based on the principle of a self-generating flashlight. Every time the carriage on his dream typewriter moves back and forth, it builds up juice for tiny batteries that provide the typewriter with its own built-in source of illumination. A second feature enables the typist to adjust keyboard pressure for either side of the typewriter so that a left-handed typist, for example, can fix the keys to take the extra pressure of his left hand.

If you’re ever shopping for a typewriter around Fulton Street in New York and a salesman asks you if you want to buy the dream machine of tomorrow—don’t laugh! It’ll probably be Mr. Typewriter himself. —Harry Kursh