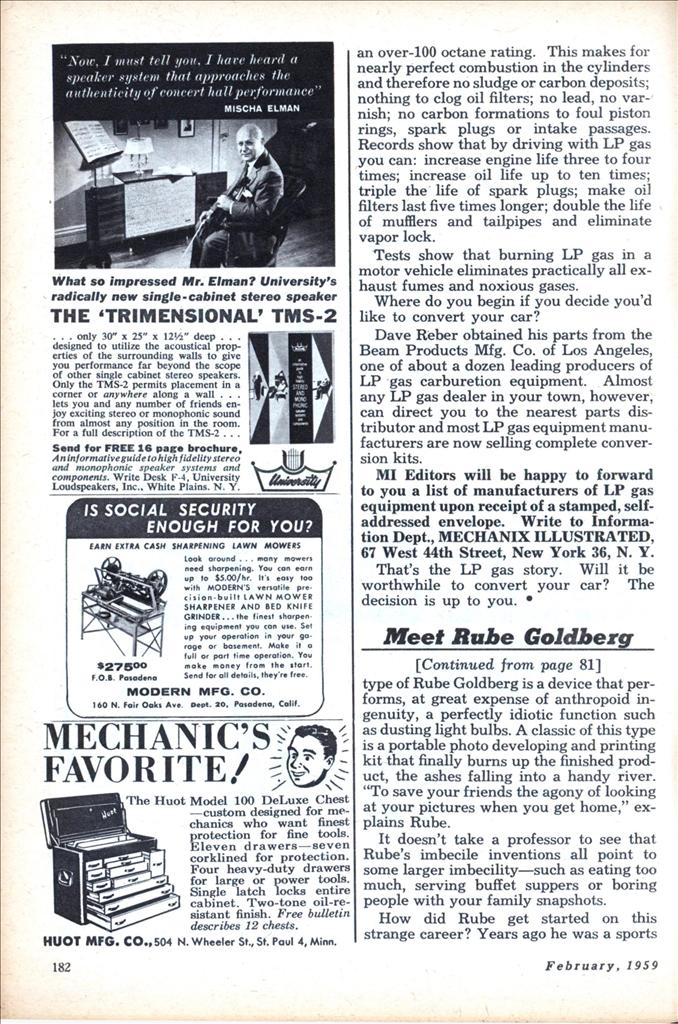 It’s a method for getting a dull comedian offstage. Here’s how it works: 1. A barber shop quartet sings a sad song. 2. It’s so sad a little man standing nearby cries big tears into a flower pot. 3. The plant in the pot grows until it tickles the bare feet of a boy sitting atop a slide. 4. The kid slides down, bumps a Civil War bugler at the bottom. 5. Bugler wakes up, leaps to his feet and begins blowing reveille in another Civil War vet’s face. 6. Second vet catches cold from the breeze and sneezes into a propeller. 7. Propeller revolves, operating two hands holding broom. 8. Broom sweeps comedian off stage or platform.

Of course there’s only one man who could—or would—dream up that invention: the fabulous Reuben Lucius Goldberg. The world’s most famous Rube, now 75, is actually starting on his third thousand inventions. For 55 years he has been at this business of devising fantastically complex ways for getting simple things done. His name has become both a noun and an adjective in common use. “That’s a real Rube Goldberg,” people say of a new fishhook disgorger or, as a switch, “That’s strictly Rube Goldberg.” Rube has given his name to one of the most amusing and touching of humanity’s foibles—the mad, courageous tendency to make mountains of molehills in hopes of profit and glory.

Recently Rube went to a 50th class reunion at the University of California. When he saw what the students and faculty had rigged up in his honor he felt almost out-Rubed. The boys had created a huge machine with flashing lights, balloons that swelled and deflated, wheels that spun, gears that meshed, pulleys that pulled, bells than clanged.

And what did it do? “Not a blessed thing,” says Rube. “It was the gol-darndest thing. It did nothing but you couldn’t beat it for impressiveness.”

Rube’s own inventions usually do something. An 18-step process ends up swatting a fly; almost equally devious Goldberg methods will find lost eyeglasses or wipe your face with a napkin.

Analyze Rube’s first 2,000 inventions —as this earnest reporter actually did, and nearly went nuts—and you’ll find they fall into three categories. In one category Rube tries to solve real life problems that get people down, year in, year out. How does a fat girl reduce? She eats sitting on a scale. As the scale registers a certain number of added pounds it moves a magnet towards a steel arm that tips a golf ball onto an ant-hill. A midget golfer, a duffer, swings at the pill and hits the hill, spilling ants. These attract an anteater, which is leashed to the dinner table. The anteater pulls the calorie-laden table away from the lady. See?

In his second category Rube deals with social problems you run into only now and then. Here’s how he beats the difficulties of eating a buffet supper: shirt studs that hold salt and pepper; a bow tie that unfolds into a tray to hold dessert; drop-shelf breast pockets for side dishes; extension trays from pants pockets for main course; a flattop haircut for fruit The third type of Rube Goldberg is a device that performs, at great expense of anthropoid ingenuity, a perfectly idiotic function such as dusting light bulbs. A classic of this type is a portable photo developing and printing kit that finally burns up the finished product, the ashes falling into a handy river. “To save your friends the agony of looking at your pictures when you get home,” explains Rube.

It doesn’t take a professor to see that Rube’s imbecile inventions all point to some larger imbecility—such as eating too much, serving buffet suppers or boring people with your family snapshots.

How did Rube get started on this strange career? Years ago he was a sports cartoonist on the San Francisco Examiner. Scratching around for a cartoon idea one day, he happened to recall a machine a teacher of analytical mechanics had rigged up back in college. It filled a 20×20 room with instruments, gauges and scales. Its job was to calculate the weight of the earth. “If he could go to all that trouble to get a ridiculous result, so can I,” thought Rube. And he sat down and knocked out the original Rube Goldberg.

Rube’s name is to be found again and again in the Congressional Record; it has become a club for legislators to batter each other’s pet projects with. Naturally, this kind of fame pleases him. But the recognition he enjoys most is in the form of strange machines contrived in his honor. When he visited the currency printing plant in Washington, officials led him proudly to a wildly renovated machine that printed outlandish money, which was solemnly presented to him as a souvenir.

You’d hardly think that a man who had made a fortune on wacky inventions would ever take to the flinty road of real gadgeteering. But he once put a lot of effort into a sheet music turner for pianists, and he has tinkered with a dishwasher of his own design. Neither worked. The biggest goof in his real inventing career was a garterless stay-up sock that did work. Rube let a partner talk him out of the venture. Later someone else made a pile on the item. “After that I went back to my own kind of inventing,” says Rube.

There are still some inventions Rube would like to see, for real. For instance, he’d like helium balloons in restaurants, to do away with hat-checking and the crushing of hats on coat trees. You put your hat on a balloon, let it go up to the ceiling; when you’re ready to leave you haul it down.

One invention he’s very serious about: something to light up roads at night— really light them up like daylight. He’s convinced it would cut the accident rate.

Rube turned to political cartooning some years ago, won a Pulitzer Prize in 1947 for his cartoon of an American family sitting unconcernedly on a plunging atom bomb shaped like the world. He does his political cartoons for King Features Syndicate and the Hearst papers.

Rube lives in a comfortable Manhattan apartment house not far from his 57th Street studio. On his studio walls are mementos of over half a century of being a famous cartoonist. There’s a painting by James Montgomery Flagg, inscribed to Rube, and a poem called Old Rube by his friend, the late Grantland Rice. In a corner hangs a large piece of drawing board covered with hundreds of signatures. Once Rube threw a big New Year’s Eve party and hung up this board topped with the inscription, “I’d like to-know what sort of bums I’m entertaining, so, damn you, sign here.” Fading signatures show that the “bums” included violinist Jascha Heifetz, novelist Edna Ferber, composer George Gershwin, comedienne Fanny Brice, playwright Marc Connelly, producer John Golden, actor Louis Calhern.

Rube’s been married 41 years and has two sons and four grandchildren. One son, Thomas George, is a well-known painter. The other, George George, is a Hollywood producer and writer. Like George M. Cohan, Rube was born on the Fourth of July. He has bright, inquiring eyes and the springy step of a young man. He’s at his drawing board before nine every morning and is still planning new books and other cartooning ventures.

For 20 years Rube drew the popular Boob McNutt cartoon strip. Boob was an endearing goof-up, always in trouble. Unintentionally, Boob put an end, some years ago, to the White House hopes of a political leader named Paul V. McNutt. Paul V. conceded that folks just wouldn’t vote for any McNutt “for fear he’d turn out to be a Boob.”

Boob has vanished from the funny papers but his creator is still tapping one of the world’s most shrewdly zany imaginations, still amusing new generations. And still inventing. Wait till you see the next 2,000 Rube Goldbergs! •