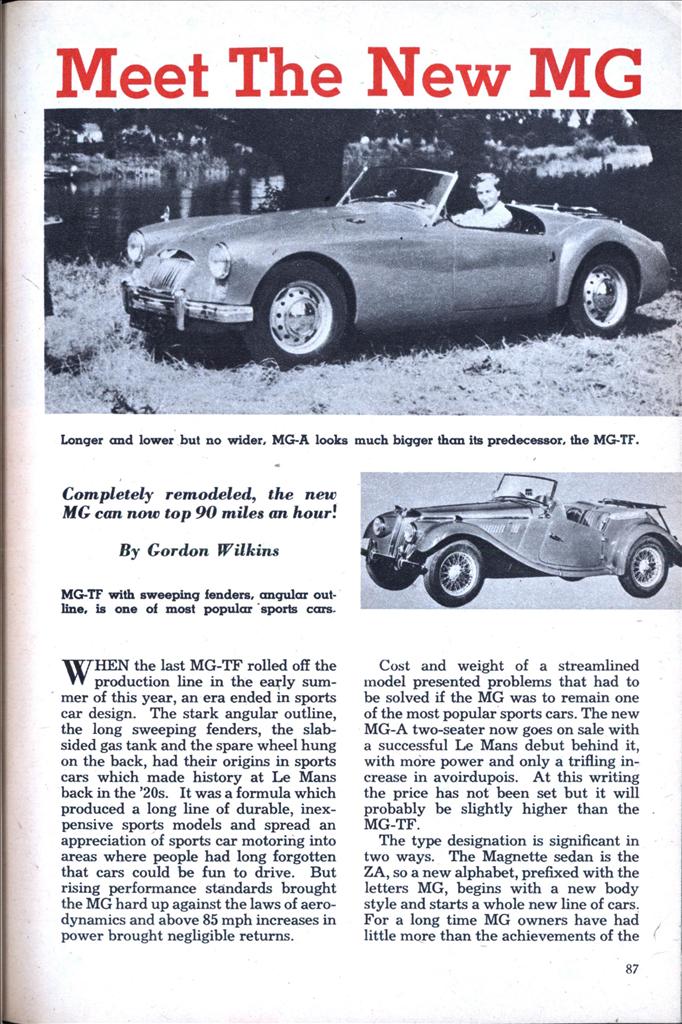 MG-TF with sweeping fenders, angular outline, is one of most popular sports cars.

WHEN the last MG-TF rolled off the production line in the early summer of this year, an era ended in sports car design. The stark angular outline, the long sweeping fenders, the slab-sided gas tank and the spare wheel hung on the back, had their origins in sports cars which made history at Le Mans back in the ’20s. It was a formula which produced a long line of durable, inexpensive sports models and spread an appreciation of sports car motoring into areas where people had long forgotten that cars could be fun to drive. But rising performance standards brought the MG hard up against the laws of aerodynamics and above 85 mph increases in power brought negligible returns.

Cost and weight of a streamlined model presented problems that had to be solved if the MG was to remain one of the most popular sports cars. The new MG-A two-seater now goes on sale with a successful Le Mans debut behind it, with more power and only a trifling increase in avoirdupois. At this writing the price has not been set but it will probably be slightly higher than the MG-TF.

The type designation is significant in two ways. The Magnette sedan is the ZA, so a new alphabet, prefixed with the letters MG, begins with a new body style and starts a whole new line of cars. For a long time MG owners have had little more than the achievements of the special record cars to remind them of the make’s racing history. But now the British Motor Corporation is stepping up the competition on all fronts. Not for 20 years has there been such intense activity as is now to be seen in the big new shops at competition headquarters. Mechanics work early and late on new projects; next year’s racers, of sensational shape, have already completed their wind tunnel tests and their engines are installed for current road tests.

The old line of MG’s, from the J2 of 1932 to the MG-TF 1500 of 1955, saw a power increase from 36 to 64 hp, or to over 80 if we include approved tuning stages, and they remained fundamentally safe, tractable and economical. The new car, therefore, had to be designed with equally large margins for development, so the chassis was given a secret try-out on the streamlined record car in which George Eyston and Ken Miles set the salt sizzling at Utah in August 1954 to establish 35 new U.S. and International Class F records at speeds up to 153 mph. Its quality was confirmed at Le Mans this year when two MG-A prototypes finished 12th and 17th, the faster covering 2,082 miles in the 24 hours.

The production model looks a bigger car than the MG-TF; longer, lower and wider. Actually, the wheelbase is unchanged, length is up 9 inches, height is down 2-1/2 inches and rear track is slightly reduced. There is much more width inside the body—a total of 48 inches across the seats. External width is an inch less than on the MG-TF.

The new, more rugged frame, has box section side members swept out wide, so that the seats can be set low down between them but driving vision is still excellent over the sloping hood, and both front fenders are visible. In comfort and weather protection, in greater space for passengers and luggage, the new shape brings real advantages. There is more room to turn the new four-spoked flexible wheel and more room for the feet. Twin separately adjustable seats have deep, curved back rests for support on fast corners and there is a comfortable arm rest between them. Big parcel containers now figure in the doors and there are no projecting locks to catch the knees. Main instrument dials are brought back in front of the driver and the long- requested gas gauge is now provided. Speedometer, calibrated up to 110 mph, carries trip and total mileage recorders; the tachometer, calibrated up to 6,500 rpm, carries a yellow segment beginning at 5,500 and a red sector starting at 6,000.

Another dial groups together oil pressure gauge and water thermometer. The loudspeaker grille is in the center, with the horn button recessed below it; beneath the facia goes the control panel for the optional heater which picks up fresh -air from behind the radiator grille. On the right is space for the radio control unit. On the extreme left is the switch for the flashing indicators and on the far right a shrouded lamp for map reading.

The big curved screen, swept by twin electric wipers, is detachable, and braced by struts which form hand grips. A well-tailored top stows away behind the seats and in front of it lies a permanently attached leather cloth envelope with compartments for the two side screens. A new feature is the spring loaded signaling flap, which closes firmly to check rattle and draughts; perhaps a little too firmly for the average feminine wrist. Spare wheel, tool kit and screw jack stow in the trunk, leaving enough free space for a couple of good sized suitcases; an external luggage rack is an optional extra.

Under the hood is the B-type four-cylinder engine. It is similar in mechanical conception to that of the MG-TF but is a more modern unit, with slightly larger bore and with its carburetors and exhaust system on the opposite side. Maximum power is 68 bhp at 5,500 rpm against the 64 bhp at 5,000 rpm of the MG-TF 1500. Torque is practically unchanged but the peak on the new engine comes in at 500 rpm higher.

On the road the first impression is one of easy maneuverability. Despite the extra length, the light, quick steering and 28-foot turning circle allows it to thread its way through the traffic like a London taxi but when the lights turn green any resemblance to a taxi ceases forthwith. The clutch seems better than the old one in combining sweetness and light pedal action with an ability to withstand full throttle gear changes. An axle ratio of 4.3 to 1 against 4.875 for the MG-TF permits a marked reduction in engine revs for a given road speed, to match the reduction in wind resistance; at the same time, the gear box ratios are more widely spaced, so there is not much change in maximum speeds on the lower two gears—about 25 mph in first and 42 in second at 5,500 rpm but in third the car rushes up to 68 before the rev counter needle is too far into the amber and it takes well over 70 to put you in the red. Maximum speed? At the time of writing there wasn’t time for a thorough test but the Le Mans cars, with engines giving 82 bhp, were given production axle ratios and full width windscreens in preparation for the Alpine Trial and with screen up and top down—the worst conditions for speed —they could be wound up to about 103-104 mph. One can therefore calculate that the stock model, with possibly more silencing, should do between 90 and 95 mph, especially with top and side screens erected.

In selecting the axle ratio for a new model the designer has to compromise between higher speeds on the gears and a possible higher all-out speed on the one hand and better acceleration on the other. Despite the use of a “faster” axle on the MG-A, unofficial tests with early examples in unmodified stock form suggest that a representative figure for acceleration through the gears from 0 to 50 mph will be about 12 seconds and from 0 to 60 mph around 19 seconds. Other axle ratios, higher and lower, can be fitted at extra cost, to meet owners’ demands.

Sports car owners are not primarily interested in fuel economy but the new low-drag bodywork combined with the lower numerical axle ratio should show useful economies at a given average speed. Drag reduction brings cumulative benefits; less power is expended in pushing the air aside, so engine revs can be reduced. This in turn means lower friction and pumping losses in the motor; less power spent thrashing the oil about; lower friction losses in the transmission. Tests with an MG-A running at a steady 30 mph have shown 38 miles per U.S. gallon. At 50 mph it does about 32 mpg and at a steady 70 mph, a creditable 23 mpg seems to be possible.

Cornering and general handling represent a big step forward. A center of gravity less than 16 inches from the ground is an inbuilt safety factor and with a well-tuned engine, advanced students will be able to demonstrate the four wheel drift. The oversteer, familiar on the MG-TF and MG-TD, has gone and the tail seems slower to break away. Hydraulic brakes, with ten-inch drums 1% inches wide, are the same size as those used at Le Mans.

There is some power roar from the disc type air cleaners at full throttle and the hand brake, still of the fly-off racing type, seems small and less accessible than that on the MG-TF. But after trying the MG-A, the fact remains that it is more than ever fun on four wheels at a price that the average fan can pay.