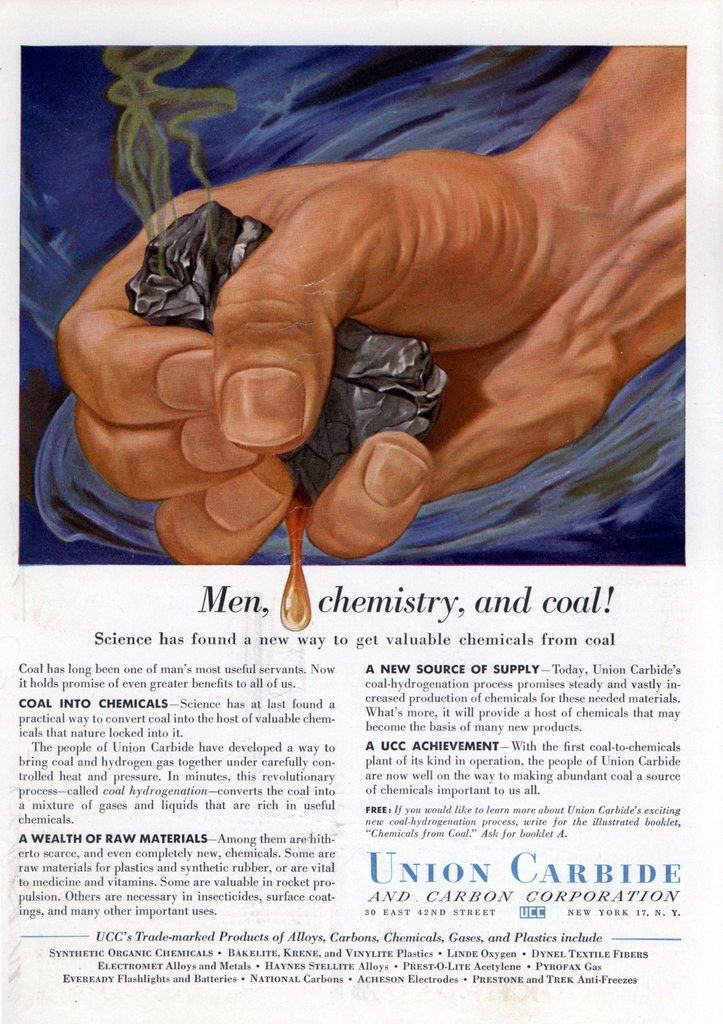 Coal has long been one of man’s most useful servants. Now it holds promise of even greater benefits to all of us.

COAL INTO CHEMICALS- Science has at last found a practical way to convert coal into the host of valuable chemicals that nature locked into it.

The people of Union Carbide have developed a way to bring coal and hydrogen gas together under carefully controlled heat and pressure. In minutes, this revolutionary processâ€”called coal hydrogenationâ€”converts the coal into a mixture of gases and liquids that are rich in useful chemicals.

A WEALTH OF RAW MATERIALS- Among them are hitherto scarce, and even completely new, chemicals. Some are raw materials for plastics and synthetic rubber, or are vital to medicine and vitamins. Some are valuable in rocket propulsion. Others are necessary in insecticides, surface coatings, and many other important uses.

A NEW SOURCE OF SUPPLY- Today, Union Carbide’s coal-hydrogenation process promises steady and vastly increased production of chemicals for these needed materials. What’s more, it will provide a host of chemicals that may become the basis of many new products.

A UCC ACHIEVEMENT- With the first coal-to-chemicals plant of its kind in operation, the people of Union Carbide are now well on the way to making abundant coal a source of chemicals important to us all.

FREE: If you would like to learn more about Union Carbide’s exciting new coal-hydrogenation process, write for the illustrated booklet, “Chemicals from Coal.” Ask for booklet A.