Mechanics And Handicraft
Issue: May, 1938
Posted in: How to
Tags: magic
4 Comments on Mental Mysteries (May, 1938) 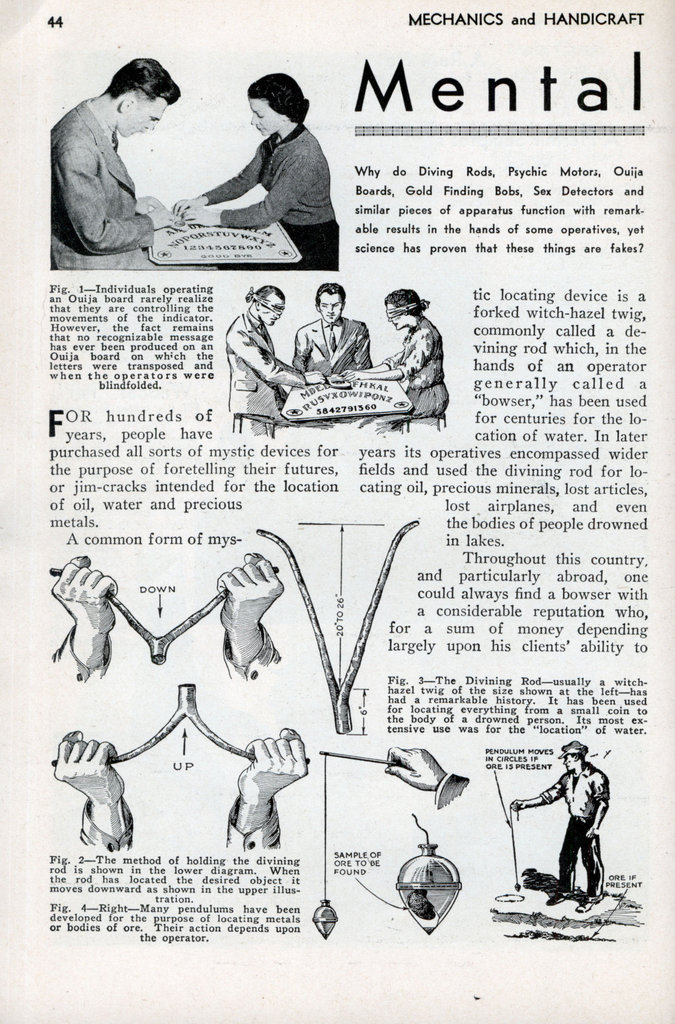 Why do Diving Rods, Psychic Motors, Ouija Boards, Gold Finding Bobs, Sex Detectors and similar pieces of apparatus function with remarkable results in the hands of some operatives, yet science has proven that these things are fakes?

FOR hundreds of years, people have purchased all sorts of mystic devices for the purpose of foretelling their futures, or jim-cracks intended for the location of oil, water and precious metals.

A common form of mystic locating device is a forked witch-hazel twig, commonly called a devining rod which, in the hands of an operator generally called a “bowser,” has been used for centuries for the location of water. In later years its operatives encompassed wider fields and used the divining rod for locating oil, precious minerals, lost articles, lost airplanes, and even the bodies of people drowned in lakes.

Throughout this country, and particularly abroad, one could always find a bowser with a considerable reputation who, for a sum of money depending largely upon his clients’ ability to pay, would locate the exact spot on his property where a well was to be sunk to bring forth a sufficient quantity of water for the needs of the land-owner and for his livestock. — In doing this work, the bowser holds his forked witch – hazel twig, or divin ing rod, in the manner illustrated in Fig. 2. He walks around the property and suddenly finds that the twig bends downward very sharply. This spot is marked and the owner is told to dig there for water.

Much has been written about the reason for the behavior of this mystic piece of wood when held in the hand of an operative properly tuned to handle it, but after all the smoke of the battle is cleared, two outstanding facts remain.

Bowsers have located water; there is no scientific foundation for their success. Therefore, it does not appear strange that scientific authorities, seeking to investigate the operation of the divining rod, request that those familiar with the handling of the forked twig plot an area of land and mark the location of water, often these operatives miss the presence of streams running only one foot below the surface of the soil. Nor does it seem strange that the bowser, when blind- folded properly and led across a test area, does not have his rod point ground-ward twice in exactly the same place in a hundred or more repeated trials.

In all due respect to the operatives of this mystic rod, it must be said that they believe in its ability to locate those items which are being sought. The control of the forked twig is entirely a subconscious muscular reaction.

For those who would like to try the experiment, it is recommended that a twig similar to that shown in Fig. 3 be cut from any tree, or it can be made of heavy wire twisted at the crotch; even a bent umbrella rib will serve. This article is held in front of the operator in the manner shown in Fig.

2. A coin, piece of wearing apparel, or any other artiicle, is then concealed in a room, or somewhere about the premises, and the seeker is told to locate it. If he has the slightest inkling of where this article might have been located, he will find that the twig will pitch violently downward when he reaches its hiding place. Subconsciously, there is a muscular control exerted upon the twig which is multiplied by the action of the wrist and small finger of each hand. The divining rod makes an interesting parlor game and creates as much thrill and excitement as the Ouija board.

Everyone is familiar with the mystic board which spells out words, sentences, foretells the future and explains the past. The usual form of this board is illustrated in Fig. 1. Upon it will be found the letters of the alphabet and the numbers from one to zero, also the two words “yes” and “no.” Generally, the board is placed on the . laps of two sitters. A small triangular or heart-shaped wooden piece mounted on three legs is the indicating device. The fingers are lightly touched to this small table, a question is asked and if the operatives believe in its virtue the small table darts across the surface of the board stopping at various letters and spelling out the answer to the question.

In a more original form a pencil was located at the point of the heart and actually wrote out the answers; the modern version makes it easier for the “mystic forces” to spell out the message.

Here again the action of the sub-conscious mind is brought into play. In justice to the many seriously minded individuals who believe in the story told by the Ouija board it must truly be said that they do not push the planchette around the table. Although they apparently exert no power upon the moving table the muscular control is there nevertheless. The truth is that the Ouija board will not answer questions to which neither operator knows the answer. More than that, no one was ever able to produce an understandable message from any Ouija board upon which the letters have been transposed and where the operatives have been blindfolded so that they could not see those letters. Here again we have a mental mystery.

During recent years many treasure locating pendulums have been developed. Some of these have bar magnets at the ends; others have a small quantity of a radio-active ore. Most of them have a small receptacle into which the prospector is to place a quantity of the metal he is seeking. The theoretical method of operation is for the prospector to explore a large territory and when he comes over the spot where there is gold, silver or some other metal, one of three actions take place (depending entirely upon the instructions one receives with the locating instrument) ; either the bob is pulled downward, or it starts to oscillate in ever winding circles, or it rocks back and forth. Here again we find the sub-conscious control in full command of the situation. If the bob should be suspended from any suitable stand it will not oscillate. But those operatives who believe in its extraordinary powers will state that some mystic force passes through the ground, through the keenly attuned operator and down through the string which supports the pendulum. Under the assumption that such a mystic force is present, scientists have tested the apparatus in the fashion illustrated in Fig. 7. Here nothing interferes with the assumed force, yet the bob refuses to operate.

Some years ago a mystic pendulum became very popular in this country. It was designated as a sex and fertility detector and was used for the purposes of determining the sex of chickens which are to hatch out of eggs placed in the incubator. Furthermore, it aimed to tell which eggs were fertile and which were not. Many attributed surprising results to this little piece of apparatus. When held over the head of someone in the room it would infallibly indicate whether the person was male or female. When held over hands of various individuals, as illustrated in Fig. 9, it would tell with phenomenal accuracy whether the hands belonged to a male or female. The product is an ingenious toy which brings to the fore the realization of this powerful subconscious muscular control and reaction. Give the pendulum to a person who has never seen it, or heard of it before, and ask him to hold it over his subject’s head and it will remain steady, or fairly so. Tell him that it will move in widening circles over the head of a female and sway over the back of a head of a male and you will be amazed to see it respond, yet the operator will swear he is imparting no movement to it.

For experimental purposes make up a sheet as illustrated in Fig. 8. Draw the cross lines and the circle, then suspend the key from a thread. Tell the operator what the key will do and ask a question. You will get the answer; invariably it will be a truthful one. Here again the reason is the sub-conscious control of the muscular movement. The chances are ten to one that the answer given by this piece of paper and key will be more truthful than the verbal expression. Like the sex detector previously mentioned, the equipment will make for much merriment and enliven any party.

Have you ever seen a psychic motor? If not, here is a field in which your imagination can expand itself. The simplest form of psychic motor is a straw supported on a needle point pivot. A glass case should preferably be placed around the straw so that it is not affected by air currents. All sorts of queer things are claimed for these straw motors. If a lady points her finger at the straw it is supposed to be strongly attracted to it. If a man does so, the straw is repelled and the violence of this attraction and repulsion is theoretically due to the “personal magnetism” of the operator. Experiment proves that in the majority of cases the straw motor will not respond, but if you try shuffling along a carpeted floor, you will find that the straw is acted upon very readily by the static charge built up in the body. So if you can’t get it to work, and you find that all of your friends fail, you can impress them with your “personal magnetism” by demonstrating how the straw will respond for you. Drag your feet around the carpet as you walk around the table and then hold your finger near the glass.

Another method of making this straw motor is illustrated in Fig. 13. Here the bottom of a gallon jug has been cut off to make a bell jar. The straw is then suspended from a split thread, or blond hair. (A naturally blond hair is preferable; it is much thinner than a black hair or than a bleached hair).

One of the strongest mystic motors is illustrated in Fig. 12. This is merely a cylinder of paper supported from a bearing (a needle) on an inverted glass tumbler. The needle can be pushed through a straw, in turn pushed through the paper cylinder, or the horizontal member can be a strip of paper glued in place. The cylinder should be carefully balanced. When the cupped hand of the operator is held alongside of the cylinder, it will start to rotate and will rotate faster for some individuals than for others. When the right hand is held close to the cylinder the drum turns counter-clockwise. With the left hand, it turns clockwise. Strangely enough, the cylinder is not affected by a bar magnet as shown in Fig. 14 or by an electrified body as shown in Fig. 15. What then makes it work?

The reason for the operation is that the temperature of the hand usually is higher than the temperature of the room. When the hand is properly cupped, convection currents arise from the hand at an angle, impinge upon the surface of the cylinder, and cause it to rotate. By shifting the position of the hand, causing the air stream to ascend at a different angle, the cylinder can be made to rotate either to the right or the left with the same hand. It is easier, however, to use the left hand for a clockwise rotation.

This mystic motor should not be confused, in operation, with the sub-consciously operated devices such as the Ouija board, divining rod, sex detector and other pendulums. Here the effect is purely physical; in the latter it is muscular.