Modern Mechanix
Issue: May, 1929
Posted in: General
Tags: magnetism
3 Comments on Metal Bar Floated in Air by Magnetic Repulsion (May, 1929)

Metal Bar Floated in Air by Magnetic Repulsion (May, 1929)

Obviously this is a silly trick, but I posted the piece mainly so I’d have an excuse to link to this insane video of “quantum” levitating superconductors locked in a magnetic field. You need to see this, they can actually levitate upside down. 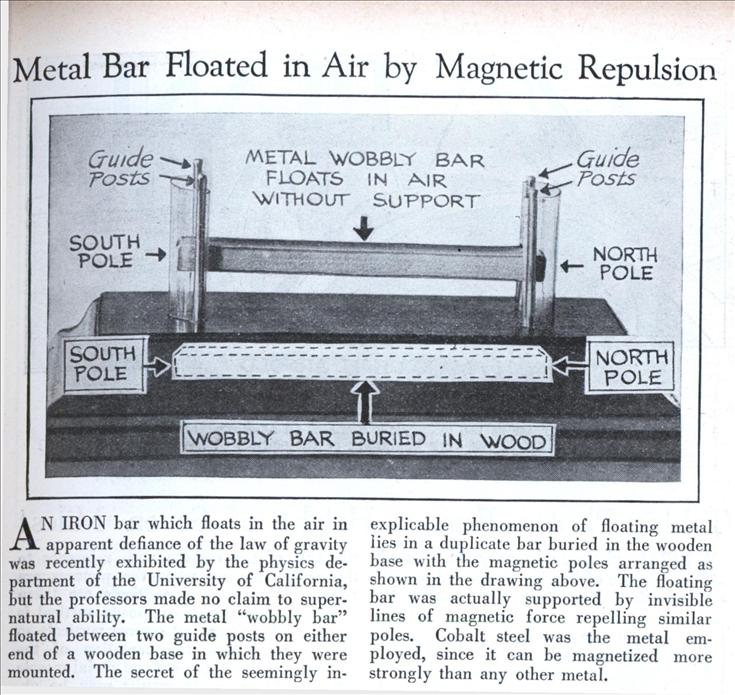 AN IRON bar which floats in the air in apparent defiance of the law of gravity was recently exhibited by the physics department of the University of California, but the professors made no claim to supernatural ability. The metal “wobbly bar” floated between two guide posts on either end of a wooden base in which they were mounted. The secret of the seemingly in- explicable phenomenon of floating metal lies in a duplicate bar buried in the wooden base with the magnetic poles arranged as shown in the drawing above. The floating bar was actually supported by invisible lines of magnetic force repelling similar poles. Cobalt steel was the metal employed, since it can be magnetized more strongly than any other metal.