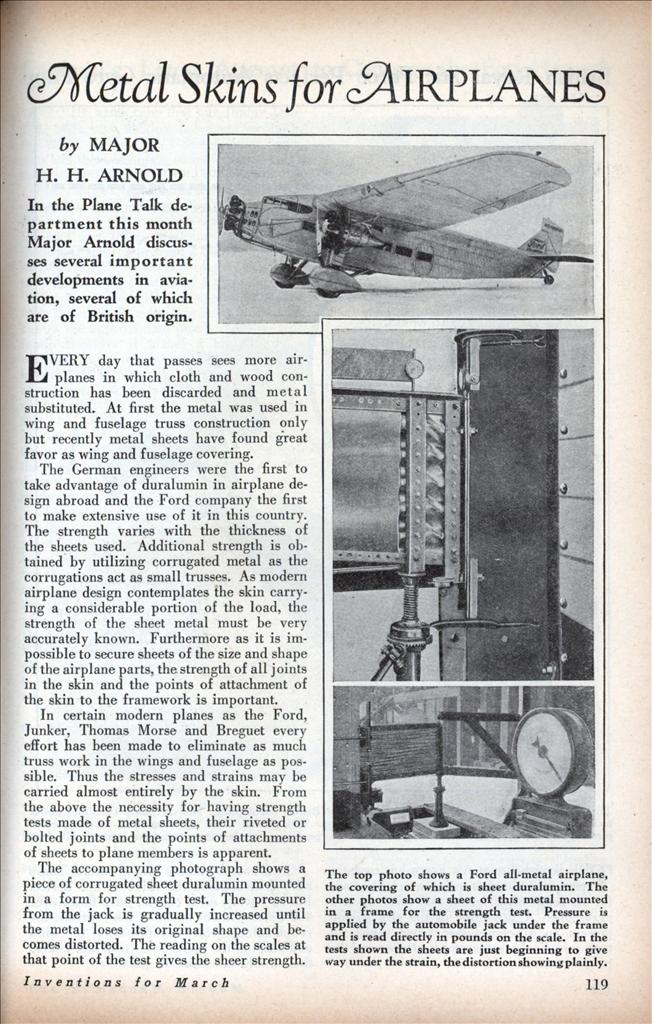 In the Plane Talk department this month Major Arnold discusses several important developments in aviation, several of which are of British origin.

The German engineers were the first to take advantage of duralumin in airplane design abroad and the Ford company the first to make extensive use of it in this country. The strength varies with the thickness of the sheets used. Additional strength is obtained by utilizing corrugated metal as the corrugations act as small trusses. As modern airplane design contemplates the skin carrying a considerable portion of the load, the strength of the sheet metal must be very accurately known. Furthermore as it is impossible to secure sheets of the size and shape of the airplane parts, the strength of all joints in the skin and the points of attachment of the skin to the framework is important.

In certain modern planes as the Ford, Junker, Thomas Morse and Breguet every effort has been made to eliminate as much truss work in the wings and fuselage as possible. Thus the stresses and strains may be carried almost entirely by the skin. From the above the necessity for having strength tests made of metal sheets, their riveted or bolted joints and the points of attachments of sheets to plane members is apparent.

The accompanying photograph shows a piece of corrugated sheet duralumin mounted in a form for strength test. The pressure from the jack is gradually increased until the metal loses its original shape and becomes distorted. The reading on the scales at that point of the test gives the sheer strength.