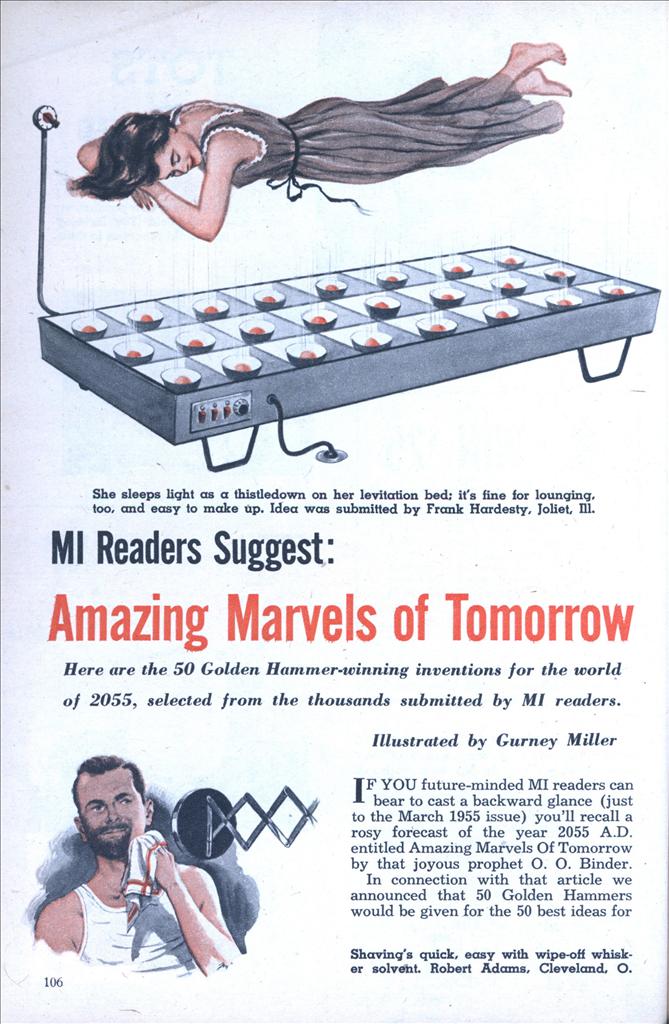 Here are the 50 Golden Hammer-winning inventions for the world of 2055, selected from the thousands submitted by MI readers.

Illustrated by Gurney Miller IF YOU future-minded MI readers can bear to cast a backward glance (just to the March 1955 issue) you’ll recall a rosy forecast of the year 2055 A.D. entitled Amazing Marvels Of Tomorrow by that joyous prophet O. O. Binder. In connection with that article we announced that 50 Golden Hammers would be given for the 50 best ideas for inventions that would make the world of 2055 even jollier. From the thousands of suggestions that poured in from enthusiastic futurists we have selected the 50 below. Some of these ideas were sent in by as many as 20 different readers. In such cases, when the idea was a winner, we gave the award to the writer of the letter with the earliest postmark.

To all MI readers who sent in suggestions: a million thanks. And may the world of tomorrow be as wonderful as we all hope!

Sound and color cameras that record on tape. Home movies can then be played back on your TV set. B. E. Arnold, Wilmington, Cal.

Instead of doors and walls, force beams cut off vision by bending light rays. To enter a house you merely step through the electronic beam. Larry Hyder, Metolius, Ore.

Radio that picks up voices from the past, lets you tune in on historic speeches. Mrs. Link Jackson, Slaughters, Ky.

Recording tape that plays back voice and image on receiving machine, to be mailed like letters. Harry Russell, USS Eldorado.

For home decorators, a projector that transfers color photos to walls, can also erase them. Harold Chapin, Athol, Mass.

Central Information Bureau that flashes desired information on any subject on a screen after question has been dialed in. PFC Frank Schreiber, U.S. Army, Schweinfurt, Germany.

Fast sleep machine: crawl in and get the equivalent of eight hours’ sack time in minutes. Larry Larson, Branson, Mo.

Impulse-induction spectacles for the blind, or for seeing in the dark. Transmits images directly to the brain. Howard Moore, San Diego, Calif.

Electronic Transporter: person or object to be transported any distance is put in analyzer, converted to electronic pattern and sent via radio beam to preselected integrating receiver, then converted back to original form. O. H. Klinefelter, Glen Ridge, N. J.

Automatic two-way translator that allows you to converse with anyone while you speak your language and he speaks his. Jason W. Lee, Ashland, Ore.

For mothers, a pocket viewer similar to a tiny TV screen, enabling you to keep an eye on what’s going on at home. Ruth Hazel, N. Randolph, Mass.

Moving road map on your dashboard that shows the exact location of your car as you drive merrily along your way. Thomas Halt, Burley, Idaho.

All housework done automatically by appliances controlled by timers, working on light beams of various colors.

For home bars, automatic drink mixers. Push a button, get your favorite drink mixed just the way you like it, effortlessly, in only a few seconds. Gerard Severynse, Glendale, N. Y.

TV tape that records programs you especially like, plays them back on set. You can record yourself or buy tape recordings. Neil Burnett, Springfield, O.

Electronic master clocks that control all timepieces in the area, keeping them on time. Lou Tiffany, Napa, Calif.

Shopping by TV: you have only to dial the item number; it is billed and shipped to you immediately by underground conveyor tube. John Heffley, Collinsville, Texas.

Exterior and interior walls that can be turned to different color and transparency frequencies. Carl Klamut, Bellport, N. Y.

With Teleautovision on your dashboard you can see the road ahead of the cars in front of you; no need to pull out of line for a peek before passing. Henry Roy, Sr., Devon, Conn.

For enjoying home life in peace, an electronic screen that lets in only the sounds that you really want to hear. Scott Pope, Bay City, Mich.