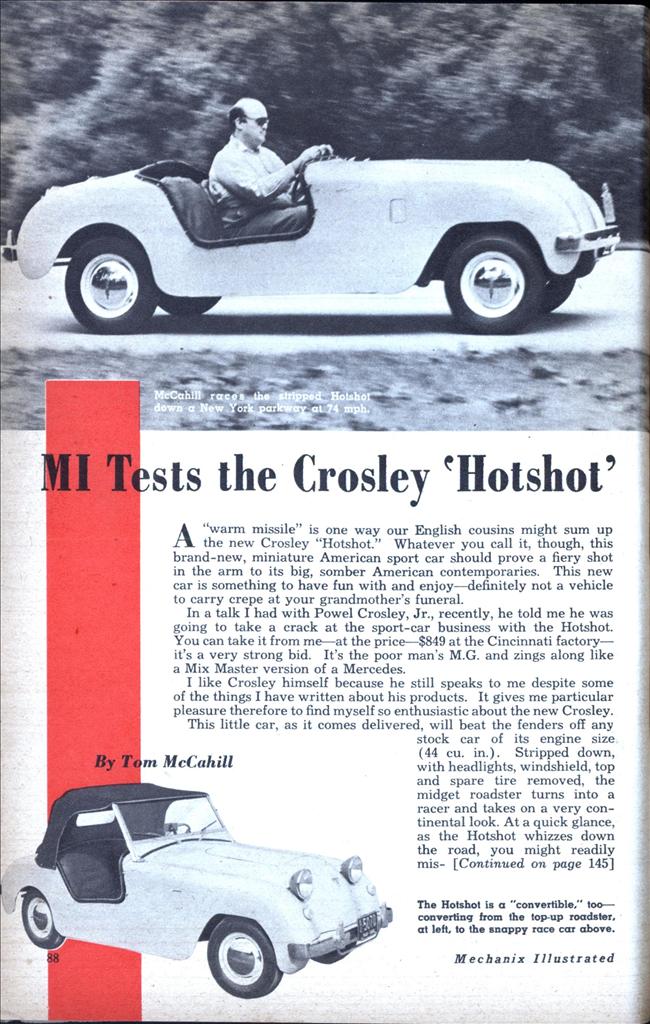 A “warm missile” is one way our English cousins might sum up the new Crosley “Hotshot.” Whatever you call it, though, this brand-new, miniature American sport car should prove a fiery shot in the arm to its big, somber American contemporaries. This new car is something to have fun with and enjoy—definitely not a vehicle to carry crepe at your grandmother’s funeral.

In a talk I had with Powel Crosley, Jr., recently, he told me he was going to take a crack at the sport-car business with the Hotshot. You can take it from me—at the price—$849 at the Cincinnati factory— it’s a very strong bid. It’s the poor man’s M.G. and zings along like a Mix Master version of a Mercedes.

I like Crosley himself because he still speaks to me despite some of the things I have written about his products. It gives me particular pleasure therefore to find myself so enthusiastic about the new Crosley.

This little car, as it comes delivered, will beat the fenders off any stock car of its engine size (44 cu. in.). Stripped down, with headlights, windshield, top and spare tire removed, the midget roadster turns into a racer and takes on a very continental look. At a quick glance, as the Hotshot whizzes down the road, you might readily mistake it for a Cisitalia or even a Ferrari.

Crosley has raised the compression ratio of his engine to 8 to 3. If you want to use the car in road races, you can hop up that ratio to 14 to 1. For such compression, of course, you will have to use gas with a very high octane rating. The engine also sports overhead cams and valving in the best racing tradition. As you know, overhead cams are as usual at Indianapolis as buttons on an overcoat. The engine, in its present standard form, develops 26.5 hp. As the entire rig weighs about 1000 lbs., the engine isn’t so small for this midget.

I drove a stripped-down Hotshot hard for over 200 miles on the parkways around New York City and was immensely impressed. At 70 to 72 mph (honest) I found it held the road remarkably well. When I hit turns at high speeds, I was frankly amazed at the little car’s cornering ability. The combination coil and leaf-spring suspension could be a lot stiffer for racing. Yet, in spite of this, I hit a lot of right-angle turns at 40 and 50 and I got around ’em in one piece. The short, 83-inch wheelbase, however, can take most of the credit for its cornering characteristics.

The most obvious fault of the new Hotshot, in my opinion, are the 12-inch, baby-carriage wheels—same as those on the older Crosleys. I can’t think of a single thing to recommend them. Small tires, because of their limited surface, run far hotter than large ones, 18 or 19 inches in rim size—a definite hazard if you ever race the car over a long course.

Another reason I don’t like tiny tires on a car of this type is because it limits the car’s usage over rugged terrain. The M.G., for example, with its 19-inch wheels actually is used in England and Africa for open-field races across gulleys, ditches and stump-filled plains. If you tried this with the new Crosley, it would be completely disemboweled in a matter of minutes. The two bucket seats ride only 16 inches above level ground.

The Hotshot is the kind of a small car I would like to take across the fields in the fall hunting. But that would be impossible with 12-inch wheels.

While I’m sawing away at Mr. Crosley’s head, I’ll get my other two objections over fast, so I can get back to being sweet. The gear-shift handle is too far forward and awkwardly positioned for fast-racing shifts. My other complaint is this: The hatch cover-over the engine is secured by a lock anchoring it in the center front. At high speeds this cover vibrates like a Bronxite’s tongue “cheering” an umpire. All during my speed tests I thought the darn thing was going to break loose and separate me from my head.

Mr. Crosley, please add to your car’s looks and the driver’s sense of security by installing a good-looking hood strap in the best road-race tradition. A snappy strap would give your car $500 in extra dash and ease up on the racer’s ulcers. Couldn’t cost you more than a couple of bucks, per car. You’ll be doing everybody a favor, including yourself.

Now back to Tom, the fun-loving Rover boy. How would this poor man’s M.G. come out in a road race—such as the Bridgehampton clambake or the Watkins Glen Grand Prix— if it were pitted against the real McCoy, a British M.G.? Well, if M.G.’s Harry Rummins or Lea Francis’ Dudley Froy were driving Crosley’s Hotshots, they’d give any mediocre driver in an M.G. the worst afternoon of his life. The M.G. has a higher top speed by about six miles an hour over the standard Crosley Hotshot. But the Crosley will come close to matching the fancy British sport car in acceleration. I’m not kidding, either.

The M.G. would beat the Crosley’s brains out on the corners, but I’ll say it again: A Rummins or Froy driving, a Hotshot against an average guy in an M.G. would come pretty close to beating the M.G.

From zero to 50 mph with my extra-economy frame, I clocked the Hotshot at 17.6 seconds. But from zero to 60 it took 28.1 or almost ten seconds for the extra ten miles. Zero to 40 took 10.7 seconds. The Crosley has a flat spot in acceleration between 50 and 60 miles an hour in high. The payoff comes, however, in the time it took me to drive it a half mile from a standing start. This took only 36 seconds flat. I was doing approximately 74 mph at the end of the run.

I made several of these runs and they all were 36.1 seconds; 36.0 and 36.2. In other words, I went from 60 to 74 mph in almost 2 seconds less than from 50 to 60 miles an hour. At Indianapolis in May, the Sports Car Club ran an event which I attended, a race against time, one half-mile from a standing start. I can assure you that several M.G.’s in that race didn’t do as well for that distance.

This little Hotshot is scheduled to sell for less than $1000, delivered anywhere in America. It’s no M.G. in quality or performance, but, remember, it sells for only about 40 per cent of the price of the English job. In my opinion, the Hotshot’s a great little car in which thousands of people are going to have more fun than they have had with a car in years. It’s good-looking and sporty—should be a great favorite with anyone having a bit of an old swash buckle tucked away in them. At the price I heartily endorse Crosley’s Hotshot for having fun, blowing it up, hopping it up or just planting flowers. After all, on the market today, it’s the cheapest production-line form of transportation sporting four wheels. And that, brother, means something these days.