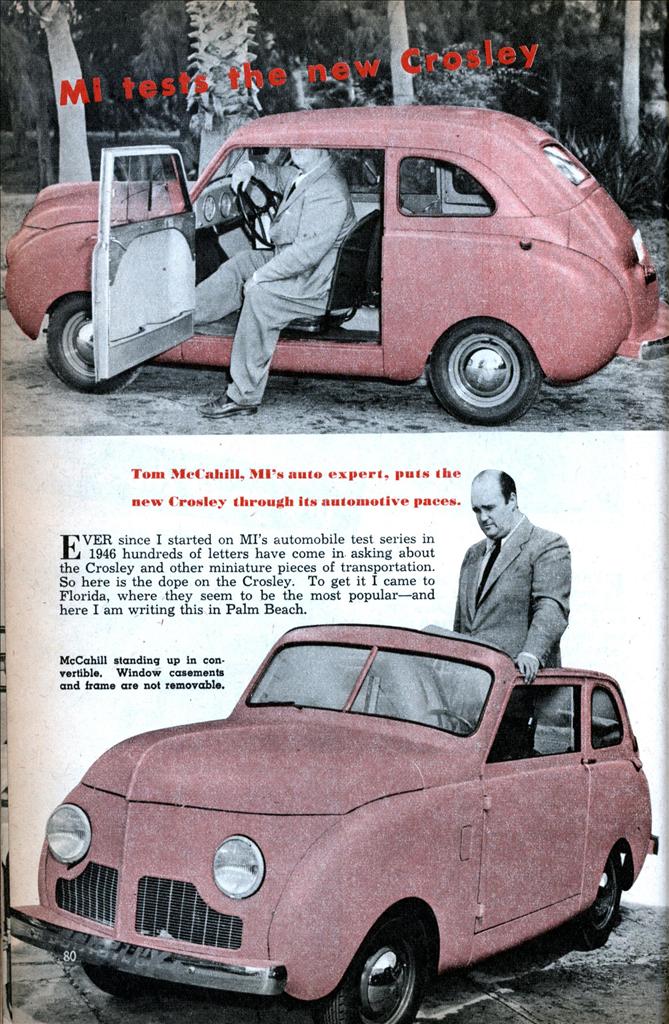 EVER since I started on Mi’s automobile test series in 1946 hundreds of letters have come in asking about the Crosley and other miniature pieces of transportation. So here is the dope on the Crosley. To get it I came to Florida, where they seem to be the most popular—and here I am writing this in Palm Beach.

Florida, like parts of southern California, has always been a favorite gathering place for small cars. The land is as flat as a bookkeeper’s chest and you can run them forever on a buck’s worth of fuel. Before testing the Crosley, I made it a point to question a number of Crosley owners. This was easy, as they are all over the place down here—like slot machines and bookmakers. Nearly all I spoke to were enthusiastic. Some owners praised these little cars so highly that I suspected they were stockholders in the Crosley Corporation. All reported 50 miles plus to the gallon, and nearly all (this is where I got suspicious) said they could cruise them all day long at 50 miles an hour. I questioned one man who had driven his down here from Virginia and he told me he averaged 54 miles to a gallon all the way, and that on one six-hour run he averaged 49 miles an hour— that I would have to see.

Maybe an explanation of the term cruising speed is in order here. Cruising speed, according to most automotive and aircraft experts, means the fastest speed at which the vehicle can be driven or flown without damaging the machine by excess speed wear, and which at the same time is a speed that can be maintained with safety and comfort—that is, without tiring driver or pilot. All right. Now, I would like to go on record as stating that in my opinion the only time you could cruise in a Crosley at 50 miles an hour and still be comfortable, would be if you were sitting in one that was loaded on a fast freight train which was doing 50 miles an hour. They will do 50, and I drove one faster than that, but at these speeds the little 4-cylinder engine screams like a banshee with the hot-foot and, as for driving comfort, I felt as secure as a guy going over Niagara Falls in a canoe.

Crosley really has a gem of a little engine, though. It’s called the Cobra, is not much bigger than a Pekingese, and in some ways is unlike any engine ever built before. The cylinder block is fabricated from steel stampings, machined parts and steel tubing, locked in place and then brazed together in what Crosley calls a hydrogen process. The inside water-cooling chambers are made rust-proof by a baked-on rust inhibitor. The crankshaft is an iron casting. The engine has four cylinders with a 2.5 bore and 2.25 stroke. The hp rating (AMA) is 10, but it actually develops 26.5 at 5,400 rpm. When you compare this with the average American car, which hits peak power in the three thousands or four thousand at most, you quickly realize that the Crosley has a real high-speed engine similar to that in a race car, though much smaller. The displacement of the engine is only 44 cubic inches. This engine is a great advancement over the 4-cylinder midgets manufactured a few years ago by several makers, for this one really develops some horsepower whereas the others wouldn’t pull a greased kitten out of bed.

From all I can gather, the Crosley outfit is all set to make a serious bid for permanent recognition in the automotive world. They feel there is a definite place for a small, inexpensive and economical car in America, and as I see it they may be the one to really put it over.

I must say that the present Crosley is far from a small dream car; frankly, engineering imagination ran out completely in several instances. For example, I found several big men who weren’t sold on these cars and I quickly found out why. There is leg room for a man as tall as six feet two or three but due to the over-curve of the top and the window design, he may have to duck to see left or right. If his shoulders are any wider than a gnat’s, he will have to ride these things side saddle or not at all. The door is so constructed that a man with shoulders must give, because there just isn’t enough room on the postage stamp seat to move over. Now this could be compensated somewhat in mild weather if he could run down the window and rest his arm on the ledge, but even this is barred. The windows are the two-piece, sliding, overlapping type that push either forward or back, but—here’s the catch—you can’t push them either far enough forward or far enough back to get even a corner of your elbow out unless you’re the Indian Rubber Man.

I know Crosley saved quite a bit by incorporating this type of window but, if they must pinch pennies to keep the cost down, they should hire the best in body-building brains to work out a window that makes sense. The whole door arrangement could stand some redesigning as, even with the seats all the way back, the door handle is behind your shoulder and, unless you are a whirling dervish, you’ll find it difficult to open regardless of your size and beam.

I selected the Crosley sedan for my test and took it on a 50-mile run. The chassis rides exceptionally well, though the seats are on the hard side. I drove it as fast as it would go on several stretches and can say that the 26-hp engine will really whip it up, providing you give it a chance. The engine has plenty of flexibility at speeds from 20 on up but, like any high-speed engine, its power is at a low point at slower speeds. Roadability is good at speeds up to 40, but after that you are on your own. I feel the true cruising speed of these cars is between 35 and 40 and not a bit higher. The chassis is undoubtedly the best of the miniature type ever made in this country. And, of course, the economy of operation is a top feature.