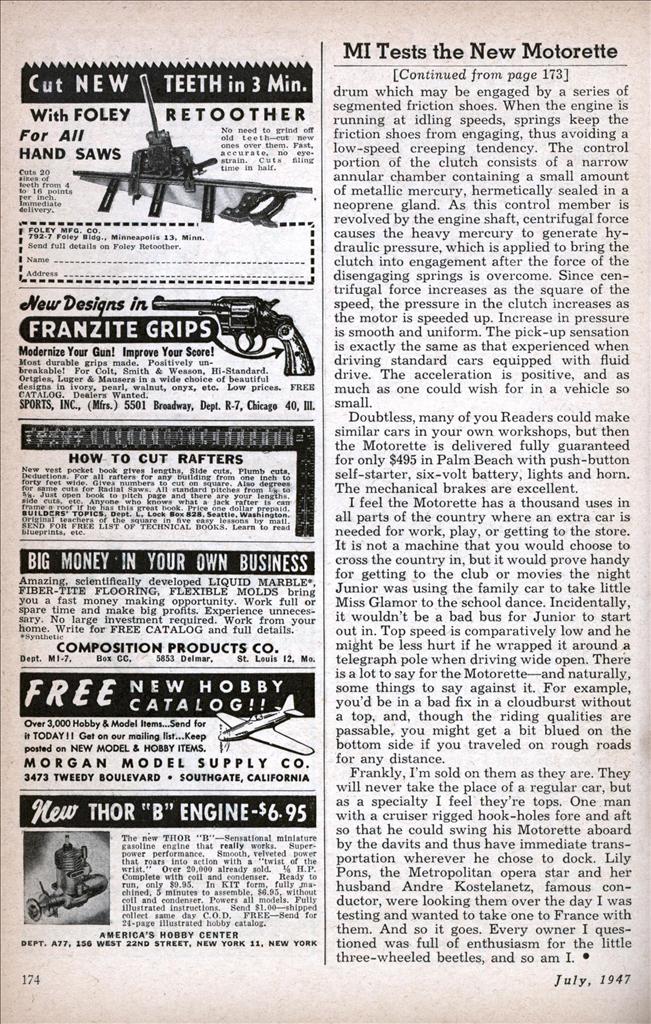 These little cars, a happy cross between a motorcycle and your kid’s tricycle, were primarily designed for use in mile-long aircraft plant, but they now spell fun with a lot of the practical on the side. They can seat two comfortably and carry enough baggage for a week-end. When I arrived at the Palm Beach headquarters of the Motorette, who should I find owning and running the salon but Fred Koch, an old pal and ex-neighbor from South Hampton, Long Island. He immediately viewed me with suspicion. “No, you don’t,” he said. “You can’t test any of these because they won’t do over 500 and they don’t ride as well as Aunt Minnie’s Rolls.” I bought him lunch and convinced him I was on a gentle research mission, however, and the test was mine.

At this point some background information might be in order. The Motorette is manufactured by the Motorette Corp. of Buffalo, New York—which undoubt- edly means as little to you as it did to me. It consists of a group of old Curtis-Wright engineers and employees at the Buffalo plant. Together, while the war was in progress they planned the making of a small practical car of a thousand uses. When the war ended they took over a factory and the present Motorette is the result.

The Motorette is extremely simple and pure in construction. Its power plant, easily reached by raising the rear hood, is a one-cylinder one-wheel-drive affair, air cooled and rated at 4.1 hp. It drives the rear left wheel by sprocket and chain at a ratio of 5.45 to 1. The steering mechanism is a cross between a conventional steering wheel and handle bars, and directly turns the single front wheel. The entire car weighs only 380 pounds and the over-all length is 90 inches on a 60-inch wheelbase. The tire size is 4.00×8 and the carrying capacity is rated at 6 cubic feet. This last figure still remains a mystery to me. For Fred Koch is six feet tall and weighs 250 pounds plus; I happen to be six feet two and weigh 250; and, believe it or not, on my initial ride I took Koch along. This means that two guys weighing more than 500 pounds together went driving in a supposedly two-passenger car which only weighs 380 pounds. Don’t tell me they are not sturdy. Of course, we were a bit on the jammed-in side, but we did it.

On my test run I went alone. In all, I drove the Motorette over 50 miles. At one point I made a speed test. I had my own car follow, for two reasons: first, the Motorette hasn’t a speedometer and second, I wanted a witness in case I landed in a coconut tree. The most I could get out of the little car was 39 mph, but brother, I felt as if I were doing 600 at least!

Perhaps the most interesting mechanical feature is the so-called Mercury clutch, which is an automatic coupling requiring no clutch. When I asked Koch how you went into reverse, he replied, “Very simple”—whereupon he stuck his foot out the side of the car and pushed backwards as if he were in a scooter. This may sound silly but that’s the way to back them. It makes a lot of sense in a vehicle so light, for it keeps complication and excess weight to a minimum. You are always in high or low gear, whichever you prefer, as there is only one.

The Mercury clutch consists of a metal drum which may be engaged by a series of segmented friction shoes. When the engine is running at idling speeds, springs keep the friction shoes from engaging, thus avoiding a low-speed creeping tendency. The control portion of the clutch consists of a narrow annular chamber containing a small amount of metallic mercury, hermetically sealed in a neoprene gland. As this control member is revolved by the engine shaft, centrifugal force causes the heavy mercury to generate hydraulic pressure, which is applied to bring the clutch into engagement after the force of the disengaging springs is overcome. Since centrifugal force increases as the square of the speed, the pressure in the clutch increases as the motor is speeded up. Increase in pressure is smooth and uniform. The pick-up sensation is exactly the same as that experienced when driving standard cars equipped with fluid drive. The acceleration is positive, and as much as one could wish for in a vehicle so small.

Doubtless, many of you Readers could make similar cars in your own workshops, but then the Motorette is delivered fully guaranteed for only $495 in Palm Beach with push-button self-starter, six-volt battery, lights and horn. The mechanical brakes are excellent.

I feel the Motorette has a thousand uses in all parts of the country where an extra car is needed for work, play, or getting to the store. It is not a machine that you would choose to cross the country in, but it would prove handy for getting to the club or movies the night Junior was using the family car to take little Miss Glamor to the school dance. Incidentally, it wouldn’t be a bad bus for Junior to start out in. Top speed is comparatively low and he might be less hurt if he wrapped it around a telegraph pole when driving wide open. There is a lot to say for the Motorette—and naturally, some things to say against it. For example, you’d be in a bad fix in a cloudburst without a top, and, though the riding qualities are passable, you might get a bit blued on the bottom side if you traveled on rough roads for any distance.

Frankly, I’m sold on them as they are. They will never take the place of a regular car, but as a specialty I feel they’re tops. One man with a cruiser rigged hook-holes fore and aft so that he could swing his Motorette aboard by the davits and thus have immediate transportation wherever he chose to dock. Lily Pons, the Metropolitan opera star and her husband Andre Kostelanetz, famous conductor, were looking them over the day I was testing and wanted to take one to France with them. And so it goes. Every owner I questioned was full of enthusiasm for the little three-wheeled beetles, and so am I.