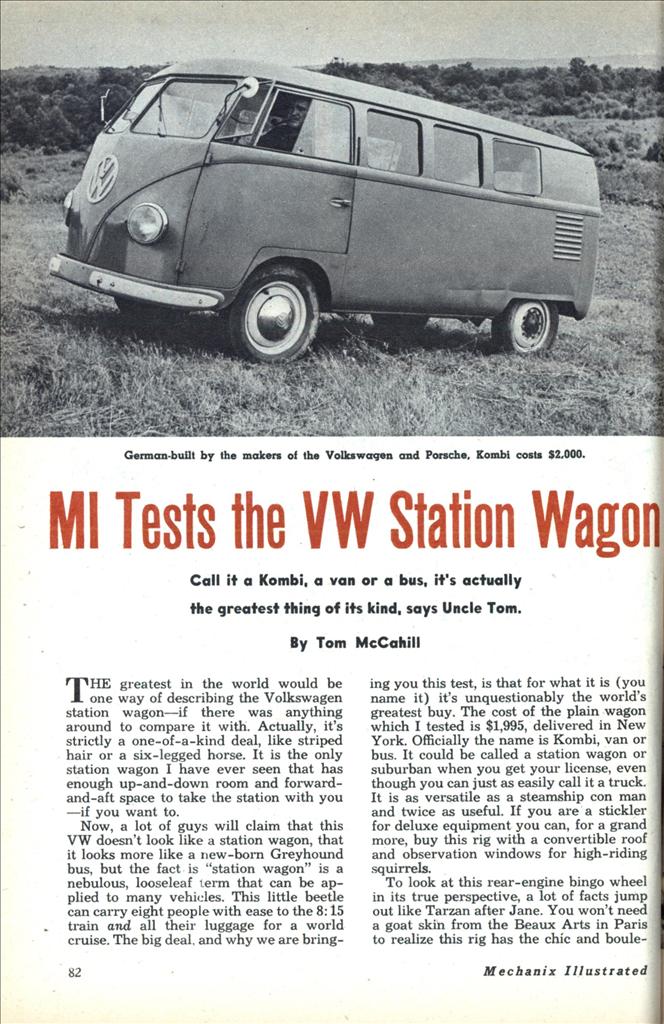 Call it a Kombi, a van or a bus, it’s actually the greatest thing of its kind, says Uncle Tom.

THE greatest in the world would be one way of describing the Volkswagen station wagon—if there was anything around to compare it with. Actually, it’s strictly a one-of-a-kind deal, like striped hair or a six-legged horse. It is the only station wagon I have ever seen that has enough up-and-down room and forward-and-aft space to take the station with you —if you want to.

Now, a lot of guys will claim that this VW doesn’t look like a station wagon, that it looks more like a new-bom Greyhound bus, but the fact is “station wagon” is a nebulous, looseleaf term that can be applied to many vehicles. This little beetle can carry eight people with ease to the 8:15 train and all their luggage for a world cruise. The big deal, and why we are bring- ing you this test, is that for what it is (you name it) it’s unquestionably the world’s greatest buy. The cost of the plain wagon which I tested is $1,995, delivered in New York. Officially the name is Kombi, van or bus. It could be called a station wagon or suburban when you get your license, even though you can just as easily call it a truck. It is as versatile as a steamship con man and twice as useful. If you are a stickler for deluxe equipment you can, for a grand more, buy this rig with a convertible roof and observation windows for high-riding squirrels.

To look at this rear-engine bingo wheel in its true perspective, a lot of facts jump out like Tarzan after Jane. You won’t need a goat skin from the Beaux Arts in Paris to realize this rig has the chic and boule- vard appeal of a paratrooper’s left boot or a pair of paint-splattered overalls. This is a purely functional workhorse and the designers obviously didn’t give a damn whether it looked like an egg in a washing machine providing it did the work. And that it does.

The first time I saw one of these marmalade jars in full action was at LeMans. A group of California sports car men, three of them to be exact and their wives, arrived in one of these wagons for the race. After the race all six adults toured the race circuits of Europe in their Volkswagen Kombi with enough baggage and camera equipment to cause the Queen Mary to list. In Switzerland I met two Englishmen and their wives, plus two kids, who were doing the same thing, only this time I met them going over one of the highest passes in the Alps. Two Italian friends of mine used a Kombi for an African big game hunt as a mobile, in-the-field hotel. For the sportsman, it would be almost impossible to match unless he spent many thousands of dollars more for custom equipment. It has far superior traction and over-rough-terrain ability than any station wagon we build. It will almost go anywhere a Jeep will with but a few exceptions. It only weighs a little over 2,000 pounds and its air-cooled 30-horsepower Volkswagen engine will give better than 30 miles to a gallon and haul a load of 1,750 pounds while doing it.

The car I tested belonged to Jack Penn, New Jersey foreign car dealer. Jack, a sports car race driver, uses this as his team car. It’s big enough to carry all spare parts and tools plus extra tires and still provide enough room for three men to sleep in it in sleeping bags. With the exception of its plumbing facilities, which are strictly continental (meaning none), you could live in this bolt house for a year. The heater is good and, with the middle two-minute-removable seat, you could transport a full grown Kodiak bear, a baby elephant or a Steinway grand.

Some of our readers might well be in the market for such a tug. It’s not fast, 60 tops, but you can cruise it coast to coast at better than 50. If you are the type who collects kids everytime you turn over and have six or seven, then this tin envelope is perfect for that trip to camp, the beach or to the relief office. If you are the type who likes to take to the broad plains or woods after big American game with some pals and dogs, this is for you. You could live inside and carry your canoes, dead game or a crooked roulette wheel on the roof. It will go anywhere and two feet further than any automobile made in America, with the exception of the four-wheel-drive Jeep. If you get hung up it’s light enough for two or three huskies to get it out of Chloe’s swamp.

I made my test over my regular route and then took the little apple crate into some rough country to try to hang it up. Zero to 60 runs were silly with this as it is not a high-performance car by any means. I did, however, take it over my skid turns at speed to check roadability and found it held even on my gravel corners. This is a fine road car but if you do get crossed up—and the rear breaks away —get off the gas, unlike regular cars, or you might end up in an early grave. Getting off the gas will bring it back on course, usually. We won’t go into the unusual case.

Naturally, like all Volkswagens this is a rear-engine, air-cooled affair. The ride is on the hard side but easily bearable. With a full load it rides better but alone you can count the stripes in the concrete without looking. In pulling power it’s no sensational ball of fire. It will climb right up a tree in the first of its four gears but it’s a slow process. On my regular hill climb she konked out in second but took it easily in first. As I have already said, I saw these rigs fully-loaded climbing over the toughest passes in the Alps. The secret is to be patient. It will climb anything but not fast. When the grade gets real grim the Kombi speed is not much better than a fast walk but it will get there.

Patience is a European motoring trait, unknown over here. The average American driver would slit his throat if he had to go over the Alps in the average European low-powered family car. It’s like walking upstairs pulling a bull moose. To the typical American, that underpowered, high-speed slow grind is similar to a nail scraping on a blackboard. In Europe it’s the order of the day so no one thinks anything about it, especially as they are getting twice as many miles to the gallon (where gas may run as high as a dollar a gallon), compared with average American transportation.

For the price of one or two good bottles of whiskey you can buy enough Kombi fuel for a round-trip up the Alcan Highway after bear. This car will never appeal to the so-called suburban station wagon set because it looks too much like a truck. It should appeal, though, to the guy who is just interested in the best equipment, whether it’s to take his brood to the beach or for a trip to the coast with all his earthly possessions including his TV set and the furniture. Paul Whiteman is thinking about buying one of these for a hunting car just to take to regular shoots. He would rig it up with an ice box, stove, gun racks, etc. This is just the thing for a rod and gun club to buy for the members as a mobile base or for field trial enthusiasts to carry a dozen or so dogs and equipment in. If it was just a little faster, what a job for pulling another Brinks holdup in! First, you would put the armored car in the back. Then—oh, well, you know what I mean. •