Modern Mechanix
Issue: May, 1931
Posted in: Automotive
12 Comments on Midget Cars with Motors in the Wheels (May, 1931) 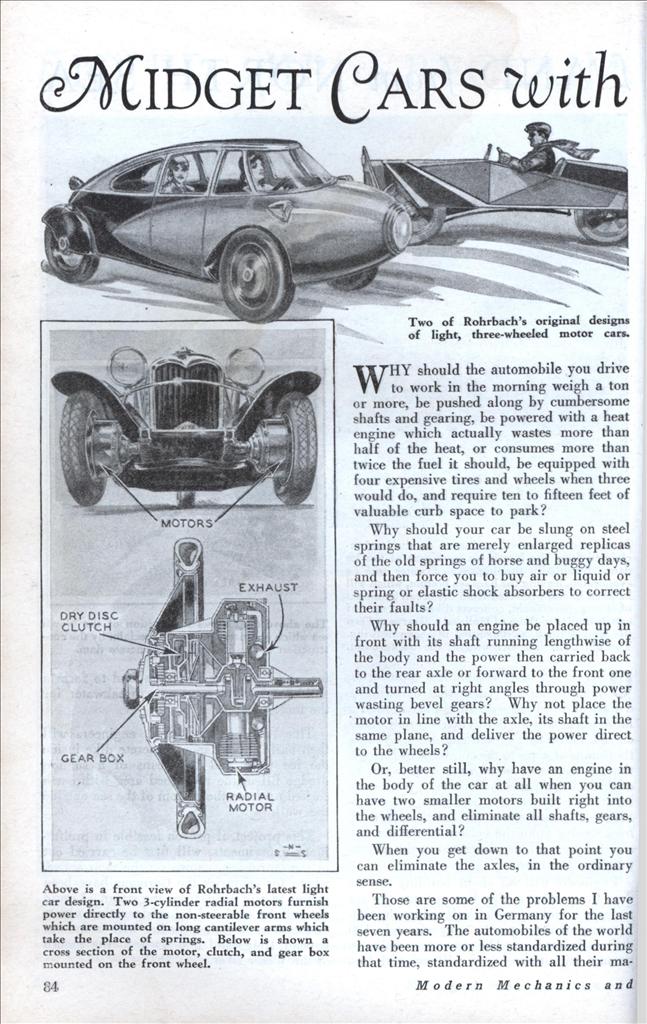 Midget Cars with Motors in the Wheels

The man who kept the Allies jumping during the World War to keep up with his advances in airplane design, now threatens to revolutionize the world’s automotive industry with midget cars powered by motors which require no cooling and mounted directly to the wheels.

WHY should the automobile you drive to work in the morning weigh a ton or more, be pushed along by cumbersome shafts and gearing, be powered with a heat engine which actually wastes more than half of the heat, or consumes more than twice the fuel it should, be equipped with four expensive tires and wheels when three would do, and require ten to fifteen feet of valuable curb space to park?

Why should your car be slung on steel springs that are merely enlarged replicas of the old springs of horse and buggy days, and then force you to buy air or liquid or spring or elastic shock absorbers to correct their faults?

Why should an engine be placed up in front with its shaft running lengthwise of the body and the power then carried back to the rear axle or forward to the front one and turned at right angles through power wasting bevel gears? Why not place the motor in line with the axle, its shaft in the same plane, and deliver the power direct to the wheels?

Or, better still, why have an engine in the body of the car at all when you can have two smaller motors built right into the wheels, and eliminate all shafts, gears, and differential?

When you get down to that point you can eliminate the axles, in the ordinary sense.

Those are some of the problems I have been working on in Germany for the last seven years. The automobiles of the world have been more or less standardized during that time, standardized with all their ma- jor faults, many of them inherited from horse drawn vehicle days, still intact.

I have a little car of my own design which was employing front wheel drive before that process was made famous on the race tracks of the United States. But my car has none of the difficult problems involved in transmitting power through flexible connections to the steerable front wheels. For my front wheels do not turn. They are fixed, and for steering I have a single wheel in the rear.

My car has a six cylinder air-cooled engine placed crosswise of the body, exposing each cylinder to equal amounts of cooling air. Instead of an axle and springs the front wheels are carried on long cantilever arms. If one wheel hits a rut or climbs an obstruction it is free to do so without twisting the body or affecting the other wheel, since there is no connecting axle. Because there is no distortion no heavy frame is needed.

I have another car of my invention, which may soon be on the market, in which a pair of small three cylinder engines are built directly into the axle ends, partly within the front wheels, eliminating the space occupied by the motor in the average car body, and eliminating the differential and all connecting shafts and gearing. The clutch, of the dry plate type, and the gears for speed shifting are actually within the wheel, and the tiny motor occupies hardly more space than an ordinary brake housing would on the outside.

Big motor buses, trucks and many pleasure cars in Germany are already equipped with my air springs, instead of the conventional steel spring, which must be supplemented by some form of shock absorber to correct its faults. The air spring is simply a suitably shaped reservoir and piston, in other words just a larger edition of an air or hydraulic shock absorber. It has the advantage that the pressure can be corrected to fit the needs of the load. When a bus or truck is lightly loaded the driver regulates the air pressure within the chamber to absorb the shocks. As the load is increased more air is forced in, and at all times the spring reaction is kept at a normal degree. It also can be adjusted to fit various types of roads, with their various degrees of shocks.

But it is in engines that I see the greatest need for revolution and improvement. The simplest study of thermo-dynamics teaches that the efficiency of any heat engine depends on the amount of heat generated which is actually converted into power. Yet in the familiar gasoline engine we actually have to use cooling water or air to dispose of heat which we are not using as power.

Obviously something is radically wrong in such a state of affairs. Several years ago I began a study of the problem of placing thermo-couples, or electric thermometers, in the cylinder head of an experimental engine and measuring the temperature at all points. Then it occurred to me to add measuring devices of the other side to measure the piston temperature. And I discovered, contrary to general belief, that the piston was relatively cool and that the faster the engine ran the cooler it became!

I knew all the theories about heat induction into the piston, but practical experience showed they were wrong. A motor piston rests on the cylinder with the aid of two or three piston rings of fairly small cross-section, and these are further insulated against heat transmission by a film of oil, and, if the old theories were right, the heat transmitted to the piston by the explosions would be bottled up there and could not escape, and the piston must soon melt. Yet practical experience shows that piston troubles are only serious when climbing steep hills in high gear, which means slow piston speed, or under similar conditions.

It was that study that led to my invention of the Rohrbach reaction motor, and finally the development of a Diesel engine of the reaction type. In the reaction motor so much more heat is used to produce power that cooling becomes unnecessary.

What I did was to build an engine with two pistons, one inside the other, traveling in opposite directions under the impulse of an explosion taking place between the two —between inner piston and under side of the top of the outer one. Having decided that a piston keeps cool because it is moving, and the faster it moves the cooler it keeps, I provided an explosion chamber in which all parts were moving.

Imagine a piston moving in a cylinder, the open end of which is shut off by placing the entire earth on it. Compared to the piston which is in the cylinder the mass of the earth is practically infinite. Now if we imagine such a cylinder to be charged with a combustion mixture the pressure of the explosion when the charge is ignited, will produce a certain effect on both the piston and the earth. As power is the product of mass multiplied by speeding impulse, the piston power conforms to that basic law.

But on the other side the same law must be operative. The mass there, being the earth, is, however, infinite, so the impulse is zero, since the explosion can not move the mass. And so the power there cannot be converted into motion and must be consumed as heat. That, in as non-technical terms as it is possible to explain it, is why the immovable cylinder and cylinder head of the ordinary engine gets hot, while the moving piston remains relatively cold. Action and reaction are always equal, and, as the cylinder can not move, the power must be consumed as heat, and so we have cooling systems to carry it away.

But now imagine the mass of the earth getting smaller and smaller until eventually it is no greater than the mass of the piston. When you reach that point your mass on either side receives an equal impulse and your power is consumed as motion.

That is an explanation of why my reaction motor can operate on about half the fuel consumed by ordinary types, since it is only necessary to provide sufficient thermal units as can, with one working stroke, be made to do useful work.

In my engine the outer of the two moving pistons is encased within the usual fixed cylinder, and, besides acting as a piston, works also somewhat in the same manner as the familiar sleeve valve. It has side ports in its upper and lower end, and the outer cylinder itself has an enlarged head into which the cylindrical piston projects at the top of the stroke. The combustion charge is admitted into the enlarged head by a valve which is held closed by a spring, but opens near the downward end of the stroke when the partial vacuum in the outer cylinder reaches a certain stage. A charge is thus admitted into the outer cylinder. When the outer of the two pistons reaches the top of its stroke (the inner one being at the bottom) the ports are opened to this charge, and it passes into the space between the two piston heads. On the compression stroke, the exhaust gases having escaped through the lower ports, the two pistons come together until the charge is ignited through the heat generated in its compression.

Among the advantages of the engine, aside from its greatly increased thermal efficiency, are the reduction in exhaust noises, absence of heavy cooling equipment, elimination of all ignition systems, elimination of valve gear, extremely light weight, practically triple efficiency with the same amount of fuel consumption.

Engine efficiency has not been a particularly pressing problem for automobile engineers, particularly in the United States, where gasoline prices have always been much below those charged on the continent. I understand, however, that rising gas prices, largely due to increasing gasoline taxes, which, I understand, are as high as five or six cents a gallon, have begun to make fuel economy an important consideration in selecting a car, just as lack of parking space and heavy traffic have opened a field in America for the small, light car. The big, heavy American car, with its high engine power and sturdy construction, was really a development based on lack of good roads, and, with paved highways now reaching over most of the continent, it may be that it will begin to give way to the small, light car which has proven so practical in England and on the continent.