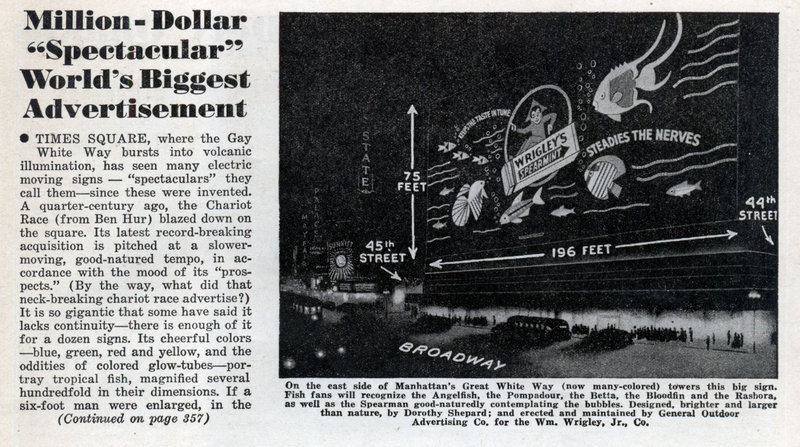 TIMES SQUARE, where the Gay White Way bursts into volcanic illumination, has seen many electric moving signs — “spectaculars” they call them—since these were invented. A quarter-century ago, the Chariot Race (from Ben Hur) blazed down on the square. Its latest record-breaking acquisition is pitched at a slower-moving, good-natured tempo, in accordance with the mood of its “prospects.” (By the way, what did that neck-breaking chariot race advertise?) It is so gigantic that some have said it lacks continuity—there is enough of it for a dozen signs. Its cheerful colors —blue, green, red and yellow, and the oddities of colored glow-tubes—portray tropical fish, magnified several hundredfold in their dimensions. If a six-foot man were enlarged, in the

same proportions, they tell us, he would be taller than the Empire State Building; the Spearman’s gum package is bigger than a boxcar. (That gives us the Spearman’s dimensions in real life—he is the length of our middle finger). There are, roughly, thirty thousand lamp receptacles in the sign; 1084 feet of glow tubing; twenty-one flashing mechanisms, each operating at its own rate of speed, and controlling 940 electrical horsepower—the requirement for lighting a city of ten thousand people. The whole display weighs 110 tons; so that the low building beneath it had to be specially designed to carry the load. The publicity agent calculates that its yearly consumption of electricity would run all the radio sets in the United States two hours. The electrical control room, with seven and a half tons of machinery, compares with that of a fair-sized power plant, and has a crew of electricians in attendance.

We are also told that the sign reaches, above the sidewalks of New York, a height equal to that of the Statue of Liberty. Miss Liberty is 111-1/2 feet from heel to crown, though her torch is lifted 305-1/2 feet above the foundation; and her wattage is about a fifth that of the new spectacular.