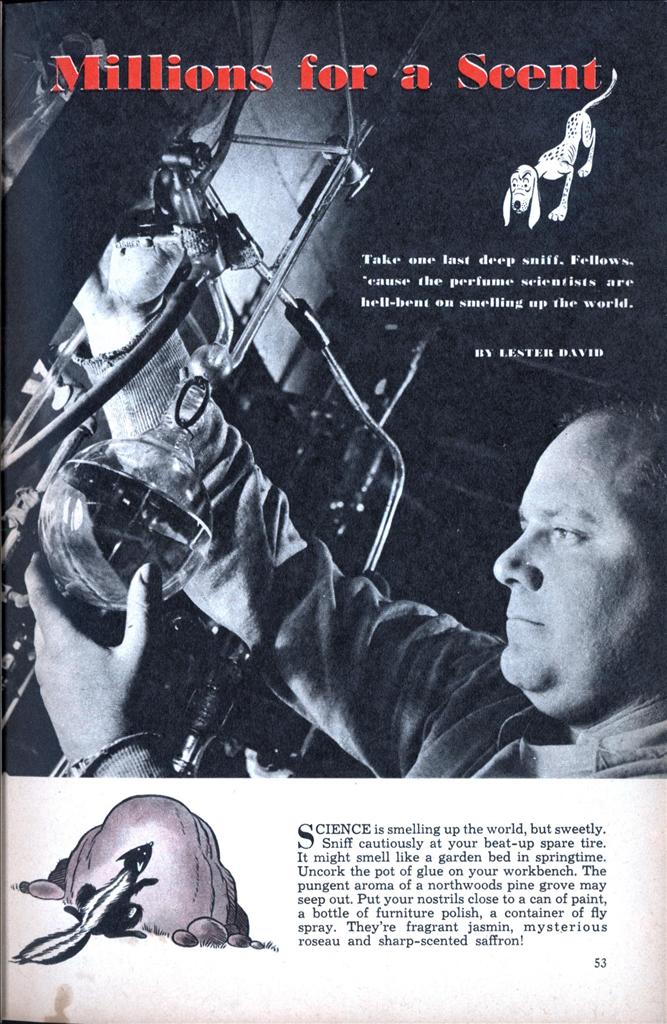 Millions for a Scent

Take one last deep sniff, fellows, ’cause the perfume scientists are hell-bent on smelling up the world.

SCIENCE is smelling up the world, but sweetly.

Sniff cautiously at your beat-up spare tire. It might smell like a garden bed in springtime. Uncork the pot of glue on your workbench. The pungent aroma of a northwoods pine grove may seep out. Put your nostrils close to a can of paint, a bottle of furniture polish, a container of fly spray. They’re fragrant jasmin, mysterious roseau and sharp-scented saffron!

It’s all being done by science’s latest precocious son, the odor engineer. He is bending over his test tubes and decanters in his bottle-lined laboratory, creating and mixing a thousand oils into ten thousand different aromas, all calculated to make the world a better place to smell in.

Nor will he stop at odorizing store-bought products. This is coming: You’re holding the little doll’s hand at the neighborhood movie and sighing with the hero as he tremblingly offers a fistful of lilacs to the starry-eyed heroine. She clasps them to her bosom and sniffs ecstatically . . . and to your surprised nostrils comes the fragrance of lilacs. She leads him into the kitchen and brews coffee while he munches a cinnamon bun. You smell the cinnamon and, as the coffee begins to percolate, you smell it, too. Just before the final fade-out they wed, and you sniff the odor of orange blossoms as the church bells peal joyously. . . .

The plan is to station an odor operator at a specially-contrived air-conditioning system, with hundreds of bottled smells at his elbow which he can siphon throughout the theater when the scenes call for them.

If the idea catches on, there will be aromatic department stores, with distinctive smells for the various sales sections . . . outdoorsy for the sporting goods counters, strong peat for men’s clothing, subtle and tantalizing for milady’s underthings, and anything else the high-powered inventive minds of the smell savants can contrive.

The horizon is broader still. Factories will smell like the throne room of a Turkish harem when the malodorous industrial atmosphere is banished. The elephant house at the zoo will be a place you can visit without a gas mask and subway customers can ride happily, free of the sharp, annoying ozone tang and the musty smell of jammed, sweaty bodies.

Responsibility for this far-reaching leap in the use of perfumes is placed at the door—anyway, at the Louisiana marshland home—of the Ondatra (Just Call Me Muskrat) zibethicus. The furry, mustached rodent has been around by the millions all the time, but it was only recently that a couple of scientists found he was infinitely richer as a perfume source than anyone suspected.

Philip G. Stevens of Yale University and J. L. E. Erickson of Louisiana State University started the new boom in odors when they emerged from their laboratory after months of research and showed the perfume industry how to increase the odor value of the muskrat’s glands fiftyfold.

They isolated liquid cyclic alcohol from the animal’s scent glands, oxidized it and obtained a chemical compound which can be used as a perfume base. The odor is powerful, lasting and musky and its value as a perfume fixative is equal in all respects to all previous discoveries.

The muskrat is trapped in swamp areas in many parts of the United States but the greatest abundance is found in Louisiana. The scent glands are found in both male and female, but in the latter the gland is so tiny as to render it practically worthless in the perfumery process. Ten ounces of a crude, fatty material can be obtained from 1,000 glands, which in turn yield about three ounces of a neutral musk oil. Out of this one ounce of the perfume fixative results when the chemical process is completed.

The fixative thus obtained is the vital element which binds together all the ingredients which make up the particular odor desired. It guards against evaporation of any particular chemical utilized; it keeps the smell intact.

Out of the muskrat fixative come thousands of specialized aromas, depending upon what odorous chemicals are mixed together by the perfumer. The perfumer is like the artist, who adds blue to his purple, puts in a dab of yellow, touches the whole ever so slightly with pink. For example, if he wishes to create a lilac odor, he mixes some terpineol, adds a bit of cananga and puts in a small portion of ylang-ylang. The strength or delicacy depends on the proportion of the various ingredients. Last comes the fixative, which stands as policeman over the temperamental members of the cast of a particular perfume.

The number of odors that can be created depends simply on the combination of aromatic chemicals used by the perfumers.

Right now in the experimental laboratories of firms such as Givaudan-Delawanna, Inc., of New York City, innumerable odors are being produced to serve in a variety of ways.

Different scents are evolved to cover up the unpleasant smells of certain types of fabrics, linoleum, varnish, medicines, ink, shoe polish and whisky.

It was found that some plastics required an odor transformation before they would be accepted by the buying public, so the engineers went to town. Special extracts are being prepared for laundries to give clothes that fresh, outdoor, sun-dried odor. And the deep-seated “prejudice” that men are supposed to have for perfumes is being given the boot in face of fact that no shaving cream or soap or tooth paste can sell well unless it is scented.

There is drama too in odor engineering. For example: Danger lurked in every inch of the clear blue waters of a South Carolina beach recently. Sharks prowled menacingly, claiming foolhardy swimmers with increasing regularity.

The community, alarmed at the number of deaths and injuries, summoned researchers, who found that live sharks avoid waters where dead and decomposing sharks are found. Further investigation proved it was the odor which forced the sharks to avoid the area.

This was the clue for the chemists. They mixed their aromatic chemicals until they succeeded in creating an exact synthetic duplicate of the odor of decomposing shark flesh. The completed chemicals were released into the water. The beach was made safe.

Every time you pick up a rose and smell it, you are smelling not the flower, but the essential oil contained in it. And this provides the clue for one of the two methods used today for the manufacture of perfumes. The first is natural, the second synthetic chemistry.

How are natural perfumes created? Vast fields of flowers, herbs and plants—roses, jasmin, hyacinth, narcissus, violets—are tended with infinite care in the world’s key perfumery areas of France, Zanzibar, Java, China. The flowers and plants are plucked and their essential oils isolated and absorbed by secret formula into the greases and oily spirits which result in the exotic fragrances milady dabs behind her ears.

The process of extracting the oils is carried out in one of three ways—distillation, enfleurage or maceration.

When distillation is used, the flowers are placed in water in huge stills. The mixture is distilled slowly, the fragrance rises with the steam and is carried with it to the receiver, where it forms a layer on the surface of water. The oils are then separated by decantation or siphoning.

Enfleurage carried out in thousands of wooden frames about a foot square and three inches deep. The frames have glass bottoms which are coated with about a quarter inch of grease. Upon this grease the flower buds are sprinkled and left for from 12 to 70 hours. During that time the oil is absorbed into the grease. The flowers are then removed and another layer added. The process continues until the grease has absorbed enough oil to make it serviceable, when it is scraped off.

In maceration, the leaves or buds are immersed in fats that have been softened by heat, and the oils thus “digested.” This process is effective only in the comparatively few cases where the plant is rich in essential oil.

All essential oils are soluble in alcohol. Spirit essences are thus obtained for the perfumer to create his own unique preparations. Oils are also derived from animal sources— civet cat, musk deer, and of course the sperm whale, which provides the fabulously expensive ambergris.

Synthetic perfumery is the triumph of science in utilizing aromatic aldehydes, esters and ethers in imitating the smells and fixative powers of the essential plant or animal oils. The chemists have taken the complicated chemical substances found in the essential oils and worked- out completed structures, starting from simple and readily available chemicals. They thus have created synthetic geraniol, rhodinol, citral, terpineol—all duplications of plant and animal oils.

This then is the science which odor engineers are harnessing. They’ve done well, but now and then they are pulled up short. Like when a nervous little man walked into the offices of a perfumer and stated he was not having much luck lately with his rod and reel. Couldn’t the odor engineers fix him up a perfume which he could put on the bait and make the fish bite more often?

The odor engineers couldn’t. But they’re working on it and you never can tell.