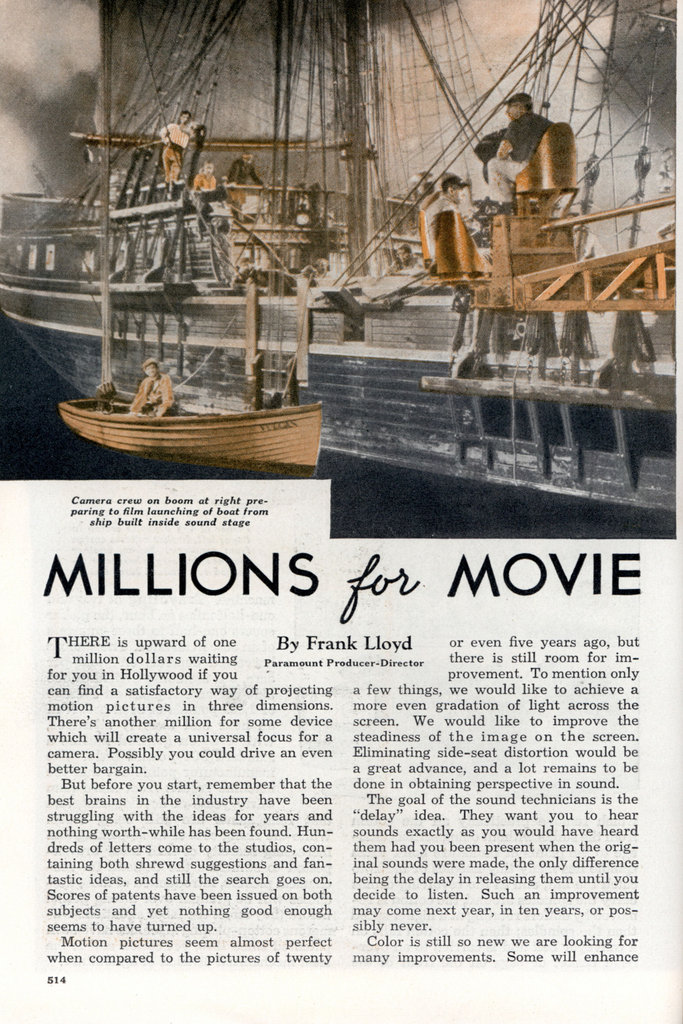 THERE is upward of one million dollars waiting for you in Hollywood if you can find a satisfactory way of projecting motion pictures in three dimensions. There’s another million for some device which will create a universal focus for a camera. Possibly you could drive an even better bargain.

But before you start, remember that the best brains in the industry have been struggling with the ideas for years and nothing worth-while has been found. Hundreds of letters come to the studios, containing both shrewd suggestions and fantastic ideas, and still the search goes on. Scores of patents have been issued on both subjects and yet nothing good enough seems to have turned up.

Motion pictures seem almost perfect when compared to the pictures of twenty or even five years ago, but there is still room for improvement. To mention only a few things, we would like to achieve a more even gradation of light across the screen. We would like to improve the steadiness of the image on the screen. Eliminating side-seat distortion would be a great advance, and a lot remains to be done in obtaining perspective in sound.

The goal of the sound technicians is the “delay” idea. They want you to hear sounds exactly as you would have heard them had you been present when the original sounds were made, the only difference being the delay in releasing them until you decide to listen. Such an improvement may come next year, in ten years, or possibly never.

Color is still so new we are looking for many improvements. Some will enhance the quality of color on the screen and some will never be apparent to an audience, but will be important because they will make color easier to handle in the studio. At present color is expensive and demands special lights, special film, and special training by everyone who handles it.

Continuous improvement in technique and equipment has been the history of motion pictures. Some who helped develop the art have become famous. The point is that progress never stops and many more improvements are going to be made. The door of opportunity is still open.

Of course, improvements such as increasing the quality of sound usually result from adding together many minor improvements instead of being achieved by one revolutionary invention. Usually, too, a technical achievement results from a group of men working together over a common problem.

But sometimes credit must go to one man alone. It’s also true that most improvements in movie-making are suggested by people already working in the studios because they understand best just what the problems are. But the industry owes a debt to scores of people who have never seen Hollywood. Workers in film laboratories and telephone laboratories have played their part in the technical development, contributing improvements both to film and sound.

Here are some recent improvements judged outstanding enough to receive special awards by the Academy of Motion Picture Arts and Sciences. Heading the list is an award to a film manufacturing company for the development of new ultra-speed films. The award statement says in part: “The development of these two films represents a major achievement in research and emulsion manufacture … and has provided a tool to obtain, under adverse conditions, high quality photographic results heretofore impossible.”

Eleven awards were made for outstanding technical achievements in the industry last year, including awards for a new design of film drive mechanism, a semi-automatic follow focus device and its application to cameras, and for a multi-plane camera that tends to create an illusion of depth in color cartoons.

Another award was given “for the exceptional application of acoustic principles to the soundproofing of gasoline generators and water pumps.”

This might seem to have little to do with making better pictures. But it is noteworthy because now such units as generators can be operated close to the microphone without creating noises and that’s important in sound pictures. Even an improvement to a sound boom or a better way of loading film may be important.

In the past, awards have been made for a multi-cellular high-frequency horn and receiver, for the production of infrared films, for the development of a quiet wind machine, for improved spotlights, an air-turbine developing machine, and for recording sound with ultraviolet light.

Such developments, few of which are ever heard about, are occurring all the time. It is estimated that the studios this year are going to turn out pictures for $6,000,000 less than last year because of better use of process-background and trick-photography methods, new lighting, sound recording, and improvements made in cameras and in negative and print developing.

About 2,000 regular employes at Paramount receive salaries ranging from those of rough labor to sums several times that paid the President. Nearly every profession is represented. Air-conditioning engineers, foundry workers, and carpenters are as necessary as cameramen. Painters, draftsmen, truck drivers and machinists all have jobs and from them come many ideas which make pictures better.

Frequently amazing developments are achieved by the technical departments between pictures. During the filming of “If I Were King” at Paramount, we had a new type of perambulating “mike” boom which was not available during the making of “Wells Fargo” a few months before. Three-wheeled and rubber-tired, with variable tread, it is highly mobile and maneuver-able. Using it in crowd scenes, the sound-recording crew is able to move in and out and obtain more lifelike recordings. It is constructed of lightweight metal and one man can handle it easily.

Similarly, we discovered an air-gun artist on this picture. He is “Scotty,” standby painter, otherwise called Joseph Mcllroy. The new high-speed film we are using makes possible very fine photographic effects with low key lighting but the drab, Middle Age interiors of the picture were inclined to register almost solid black. “Scotty” changed all that by painting in highlights at a moment’s notice. He covered up the old ones and created new ones with every change of camera angle.

They say the chance of becoming a star in Hollywood is about one in 10,000. The number of people who rise to the top behind the scenes is nearly in the same proportion. Why? You can find one answer in the application cards filled out in the studio employment offices. Three out of four applicants, when answering the query, “Type of work desired,” say they don’t know or don’t care.

Making motion pictures is one of the most highly specialized professions. The pace is fast and you have to be good to keep up. Yet the average person who applies for work doesn’t even know what he would like to do. And even knowing what you would like to do isn’t enough these days. The studios have their pick of experts. When a job is open the man with the best training and ability gets it. That’s the kind of competition faced by those whose only qualification is a desire to work in the movies.

Even when you have ability there still is no guarantee that you can get the job. In some cases, ambitious people who wanted to be actors or writers started working in other departments until they could get a chance to prove themselves. Right now even this loophole is pretty small because there are more people qualified for jobs than there are jobs.

Still, Hollywood is full of success stories of people who started at the bottom. Grover Jones, the writer, began as a scenery painter. Mervyn LeRoy, the producer, and Charles Barton, the director, each got his start as an office boy. Many heads of technical departments, people just as important to pictures as the stars, have risen from the ranks.