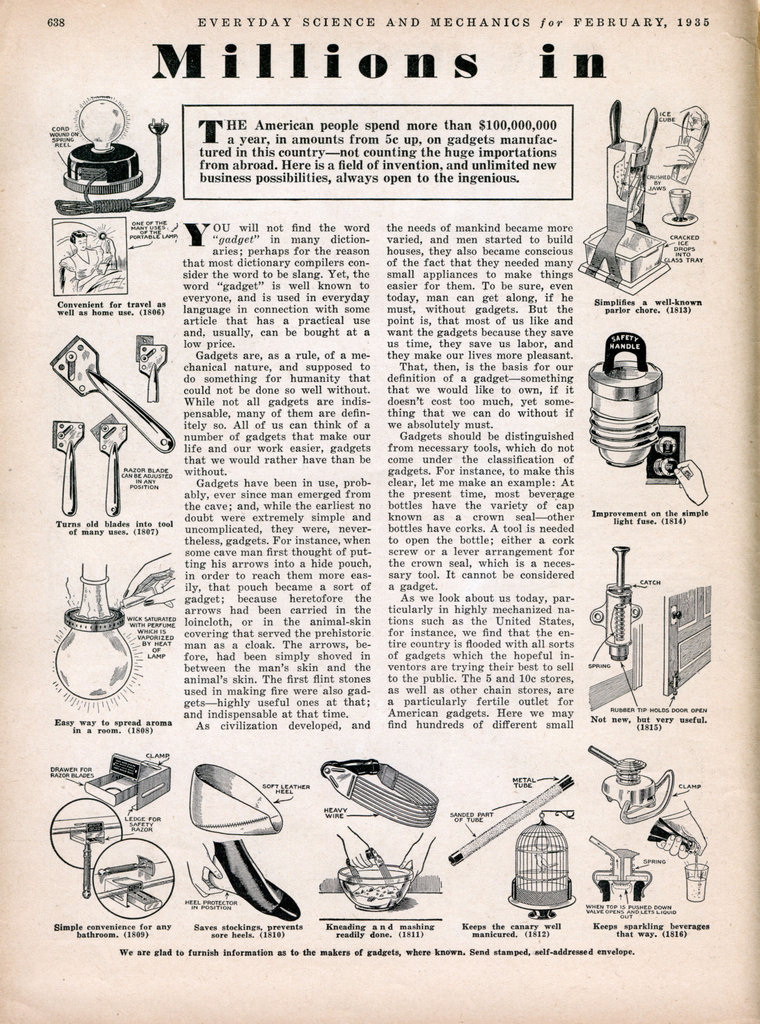 THE American people spend more than $100,000,000 a year, in amounts from 5c up, on gadgets manufactured in this countryâ€”not counting the huge importations from abroad. Here is a field of invention, and unlimited new business possibilities, always open to the ingenious.

YOU will not find the word “gadget” in many dictionaries; perhaps for the reason that most dictionary compilers consider the word to be slang. Yet, the word “gadget” is well known to everyone, and is used in everyday language in connection with some article that has a practical use and, usually, can be bought at a low price.

Gadgets are, as a rule, of a mechanical nature, and supposed to do something for humanity that could not be done so well without. While not all gadgets are indispensable, many of them are definitely so. All of us can think of a number of gadgets that make our life and our work easier, gadgets that we would rather have than be without.

Gadgets have been in use, probably, ever since man emerged from the cave; and, while the earliest no doubt were extremely simple and uncomplicated, they were, nevertheless, gadgets. For instance, when some cave man first thought of putting his arrows into a hide pouch, in order to reach them more easily, that pouch became a sort of gadget; because heretofore the arrows had been carried in the loincloth, or in the animal-skin covering that served the prehistoric man as a cloak. The arrows, before, had been simply shoved in between the man’s skin and the animal’s skin. The first flint stones used in making fire were also gadgetsâ€”highly useful ones at that; and indispensable at that time. As civilization developed, and the needs of mankind became more varied, and men started to build houses, they also became conscious of the fact that they needed many small appliances to make things easier for them. To be sure, even today, man can get along, if he must, without gadgets. But the point is, that most of us like and want the gadgets because they save us time, they save us labor, and they make our lives more pleasant.

Gadgets should be distinguished from necessary tools, which do not come under the classification of gadgets. For instance, to make this clear, let me make an example: At the present time, most beverage bottles have the variety of cap known as a crown sealâ€”other bottles have corks. A tool is needed to open the bottle; either a cork screw or a lever arrangement for the crown seal, which is a necessary tool. It cannot be considered a gadget.

As we look about us today, particularly in highly mechanized nations such as the United States, for instance, we find that the entire country is flooded with all sorts of gadgets which the hopeful inventors are trying their best to sell to the public. The 5 and 10c stores, as well as other chain stores, are a particularly fertile outlet for American gadgets. Here we may find hundreds of different small

labor-saving devices, various novelties, all of which are calculated to make life easier and more pleasant.

These gadgets sell at from a few cents to $1.00, and upwards, and can be found on scores of counters. Not only are they distributed through the chain stores, but by various novelty stores, hardware stores, electrical stores, drug stores, etc., too numerous to mention.

It would be a difficult task to accurately calculate the value in dollars and cents of the tremendous flood of gadgets which are let loose annually upon the United States by thousands of factories, large and small. Various authorities consulted place a value of from 65 to 90 millions of dollars for American-made gadgets. These are wholesale prices. So, let no one think that the gadget market is a small or unimportant one. Some large factories are supported wholly by gadget novelties of this kind. There are, of course, hundreds of small “factories,” where the word is stretched to cover them; because very often it is not a real factory, but merely a small room used to assemble the parts. In downtown New York City, for instance, there are dozens of these small-time “factories” which employ two or three girls in putting together the ‘ various gadgets. Actually, these little “attic” manufacturers make nothing themselves; they just assemble. They buy screws from a large hardware manufacturing company; they have small metal stampings made in Connecticut; while Akron, Ohio, furnishes a rubber part for the gadget. These are then boxed by the girls and sold to the 5 and 10c stores and other outlets. From such small beginnings, real factories have often grown, when the original gadget went over with the public and when the small manufacturer became sufficiently encouraged to bring out others.

And do not jump to a rash conclusion that all gadgets are just novelties. Some of the most successful gadgets have been on the market for many years, and millions of them have actually been sold. Just to name a few, such items as pan-scrapers, mechanical gas lighters, steel wool pan cleaners, have actually sold by the millions and have become staples. So have anti-window rattling devices, door checks of various varieties, and scores of pencil sharpeners that can be bought from 5c up to 25c.

On the other side of the ledger, not all gadgets that come out will “stick”; because the public does not take to all gadgets by any means. As a matter of fact, by far the largest percentage of gadgets put out in America die an early and inglorious death, on the counters of the various stores, and are never heard of again. Others that have a real use are untimely; that is, they may have been put on the market too soon, and may get a new lease of life a few years hence.

To illustrate, when the safety razor first came into use, immediately there sprung up a number of gadgets in the sharpening line, which were supposed to re-sharpen the razor blade “as good as new.” At that time, there were not many safety razor users; and many of the gadgets died, only to be revived five years later when a sufficient number of safety razors were in use. The business conditions also have a bearing on the market. For instance, during the 1927-29 boom such an item as a safety re-sharpening device was not anywhere near as popular as it has been during the depression. Sharpening a razor blade means labor; it means taking the time to do it. When the people have a sufficient amount of money, they do not re-sharpen as many razor blades as they do in times of depression; they buy new razor blades instead.

As I have said before, the market for gadgets in this country is really tremendous. There is constantly room for these novelties, and the public is always willing to buy them. There is, in fact, a sort of craze, that many people have, to be the first to have this or that new gadget to parade it proudly among their friends.

When the automobile first came into vogue, there were hundreds upon hundreds of car gadgets, many of which sold into the millions. We had all sorts of gadgets from radiator emblems to flower vases, arm rests, mechanical signalling devices, etc. Many of these later became standard equipment, and are now incorporated in practically all cars by the automobile manufacturers. This, however, does not mean to say that there are no new automobile gadgets. All you have to do is to visit an automobile supply store and see the dozens of new automobile gadgets which come out from month to month.

It is the same in practically every field; whether in the electrical art, in radio, and even in women’s clothingâ€”there are gadgets to be had in any line. An interesting point can be cited in the photographic field. Not so long ago, the Japanese started to flood the world with 25c cameras; this gadget, a plain and simple product, was, however, extremely poor and, while no doubt huge quantities were sold, it was not a serviceable instrument. In order to stem this tide, several American photographic manufacturers went into the photographic gadget market themselves, and you can now buy in the “5 and 10” a very excellent camera (illustrated in these pages, as well as on the cover) for 10c. This article is made in bakelite, has a fairly good lens, an excellent automatic shutter, and actually makes a very good photograph. A six-exposure roll of film can be bought for 10c, too. Here, then, we have a useful and practical gadget.

One wonders, incidentally, what is the profit to the manufacturer on such a gadget? It must be extremely small; and only a huge turnover, of a million cameras or more, can even begin to show a profit that runs into real money. To be sure, this is an extreme case, where a dollar item is actually being sold for 10c. Not all gadgets are sold on so close a margin; on many of them a good percentage of profit is made. If the gadget can be patented, so much the better; because then the manufacturer does not have to worry so much about competition and can make a few cents profit on each one. If the sale reaches large proportions, he can show a very nice profit at the end of the year.

And that seems to be the ambition of every inventor these days; that is, to think up some article that is useful, and for which a demand from the public can be created, by making them want to buy it. True, not every gadget can be patented; as a matter of fact, the most successful ones are not patented, and probably never have been patented. On these, the competition is keen; because every manufacturer can make them and then it becomes a question of who can make the gadget cheapest and most economical. It is here that the large manufacturer, with automatic machinery, has an advantage over the little fellow.

Naturally, the average man who goes into the gadget market will want to have something on which he can get protection; that means a patent. Such gadget patents, as I have said before, are apt to be excellent money-makers, provided you hit upon the right idea, and provided also that you can try it out on a small scale. The more complicated the gadget, and the more you must invest in dies, stampings, etc., the less money you will make from the first investment; because no gadget manufacturer can know in advance how the article will sell until it has been tried out in a number of stores. That means a n investment, and there are no two cases exactly alike.

The American gadget market is not only hugeâ€”referring to the domestic marketâ€” but many of the gadgets are exported to every country in the world; there are dozens of manufacturers who supply this demand of far distant outlets.

And let no one think that the gadget market in this country is apt to decline. With our advance in civilization, the chances are overwhelmingly in the opposite direction; since the more mechanized we become, the greater the demand for gadgets. We probably have not even scratched the surface, and in the years to come we may expect to see a flood of gadgets on the market that will dwarf anything we have seen so far.